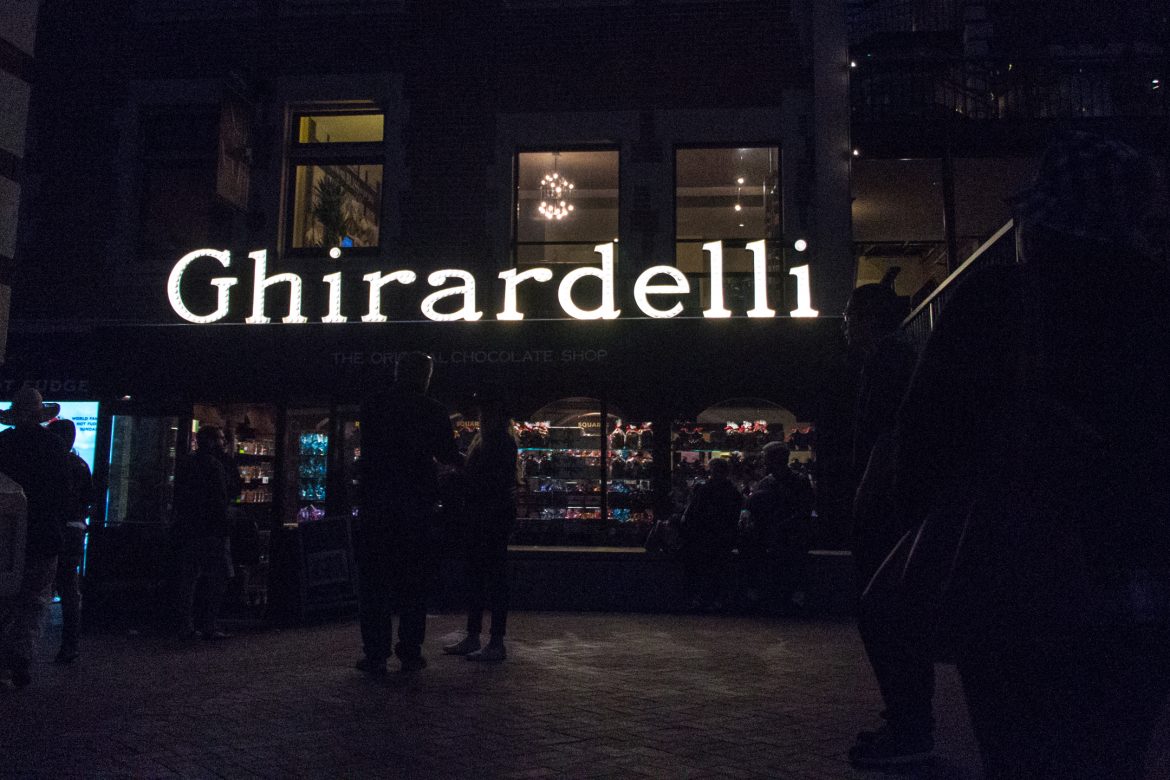 Ghirardelli has been a Bay Area institution since the nineteenth century. (Photo of the Ghirardelli chocolate shop in San Francisco courtesy Alberto Cruz on Flickr).

Sophie Mulder, 9, hopped off the table where she was sitting and skipped into Ghirardelli Chocolates in San Leandro on Saturday, eager to get chocolate chips for cookie baking at a bargain price.

The Oakland resident and her parents Caspar and Vangie were part of a steady stream of customers waiting in line outside Ghirardelli’s warehouse and headquarters on 139th Avenue during the company’s annual holiday discount sale.

“We got chocolate for presents and a lot of baking stuff,” said Sophie, an expert baker who proudly explained that she creates not only chocolate chip cookies but doughnuts.

Goodies including the company’s number-one seller, the milk and caramel squares, can be had at the sale for around half-price. The squares usually sell for around $7 for a stand-up bag.

“Every year, thousands of people come to our sale,” said Marina Gonzales, Ghirardelli’s marketing manager, in a phone interview.

The event has been going on for more than 15 years. The company started in San Francisco in 1852, moving to San Leandro in 1967.

This year, instead of a one-day blowout, the on-site sale is scheduled to last for 10 days, running every day through Dec. 20. Shoppers can just show up or reserve a spot in advance online. A virtual warehouse sale with in-person pick-up appointments will continue through the end of December.

“We stretched it out so we can accommodate a large number of people safely,” said Cynthia Contreras, a district manager who was onsite welcoming customers Saturday.

Masks are required and only four people are allowed at a time in the small store on the premises, in conformance with COVID-19 guidelines. Customers stand in line six feet apart waiting for admittance. While she was waiting, Sophie clambered atop a table near the entrance.

As she stood in line waiting her turn to go in, Holt jingled the stylized sleigh bells she was wearing around her neck. “It’s nice to be in a festive mood,” she said.

Holt said her favorite Ghirardelli chocolate is the milk chocolate caramel squares, a sentiment shared by Sophie and, apparently, quite a few people.

Incorporated in 1852 in San Francisco by founder Domingo Ghirardelli, the company has a rich heritage in the Bay Area. Anyone who has ever entertained out-of-town guests knows one of the first stops is likely to be San Francisco’s Ghirardelli Square, though the visits are less likely occasioned by its status as a National Historic Register landmark and more by the treats.

In 2006, the company launched its first ecommerce initiative.

Ghirardelli has about 20 stores nationwide and employs about 800 people, Gonzales said. Its wares are sold at grocery stores all over the country.

“Fortunately, we are faring relatively well during COVID-19,” she said.