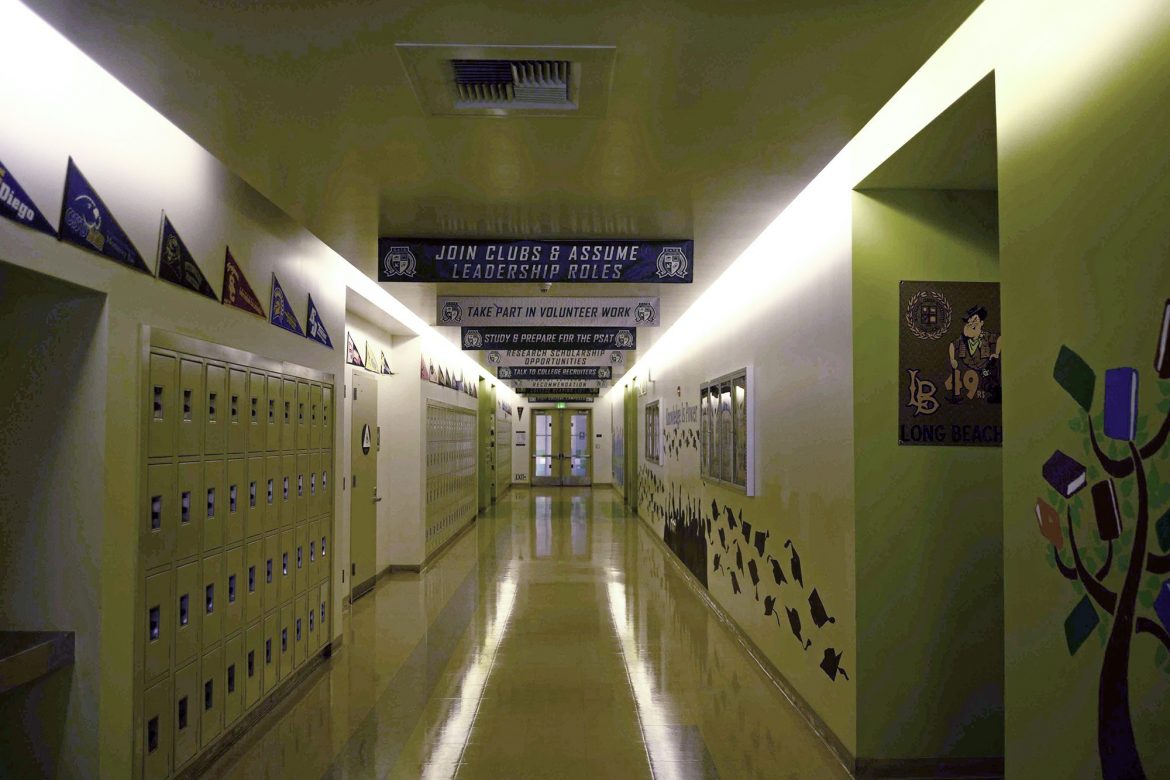 Inside the Communication and Technology or C.A.T.S highscool in South Central LA, on Nov. 18, 2020. Photo by Tash Kimmell for CalMatters.

It’s the question on everyone’s minds: When will Gov. Gavin Newsom announce a new stay-at-home order?

The governor hasn’t made a public appearance since Monday, when he said he planned to be “ubiquitous” during “an incredibly important week in the history of this pandemic.” Despite his hints that another lockdown was on the way, multiple counties said late Tuesday the state hadn’t yet informed them of more restrictive plans.

Lockdown or not, the fact that more than 99% of the state’s population is in the most restrictive purple tier means that many schools likely won’t resume in-person classes in January as they’d hoped — pushing hundreds of thousands of students closer to a full year of online learning. Citing a recent study that found 2020’s learning loss will result in 5.53 million cumulative fewer years of life for elementary school students, a bipartisan pair of lawmakers asked the state’s top health official in a Wednesday letter to prioritize teachers for the coronavirus vaccine. The San Francisco Board of Supervisors is considering passing a similar resolution.

At the Communication and Technology high school in South Los Angeles, where almost all students are socioeconomically disadvantaged and roughly 1 in 10 new to the country, several classes have more than 70% of students failing, CalMatters’ Ricardo Cano reports.

After years of work to change the school’s culture, 85% of students graduated in 2019. But once the pandemic hit and the campus closed, some students, including one named Kevin, fell off the map — leading counselors like Antonio Roque to make repeated phone calls and even visit their homes, hoping to convince them to return.

The coronavirus bottom line: As of 9 p.m. Wednesday night, California had 1,245,948 confirmed coronavirus cases and 19,324 deaths from the virus, according to a CalMatters tracker.

Even as the state considers tougher coronavirus restrictions, some of its current orders are in legal jeopardy. After the U.S. Supreme Court last week struck down New York’s restrictions on indoor religious gatherings, many church leaders are optimistic that California’s limitations will be overturned as well, CalMatters’ Ben Christopher reports. We’ll likely know more by the end of the week, when the Supreme Court is expected to weigh in on a case brought against the state by an evangelical Christian ministry in Pasadena.

Meanwhile, Los Angeles County’s outdoor dining ban is also under legal scrutiny. A superior court judge on Wednesday ordered county health officials to show scientific evidence proving that the health care system would be overwhelmed without the ban and justifying the county’s decision to implement rules stricter than the state’s.

Newsom released Tuesday a long-awaited master plan for early learning and child care that outlines a series of ambitious goals, including universal preschool for all 4-year-olds, universal preschool for all 3-year-olds with disabilities or from low-income families, and an expanded paid family leave program. But the 113-page plan is light on details of how the state plans to accomplish these goals and pay for programs that could cost $12 billion annually. Nor does it offer specific solutions to help California’s existing child care system survive the pandemic. Since March, nearly 6,000 California providers have closed their businesses temporarily or for good, leaving more than 60,000 children without care, according to Child Care Providers United. In November, members of the union filed an unfair practice charge against California, alleging the state refused to collaborate with them to find solutions.

It may be December, but fire season isn’t over yet. Powerful Santa Ana winds sweeping through Southern California are expected to peak today at 70 miles per hour, creating a “particularly dangerous situation” for wildfires, according to the National Weather Service. Southern California Edison cut power for 900 customers Wednesday, and an additional 270,000 customers could lose power today, the Los Angeles Times reports. With no rain scheduled to fall before the new year, Cal Fire, the state firefighting agency, hasn’t yet authorized its units to begin winter preparations — meaning wildfire season is still alive and well.

When it comes to election misinformation, a service dog named Maggie Magoo was just the tip of the iceberg. A majority of California’s voter registrars told CalMatters’ Freddie Brewster and Katie Licari that they spent hours each day trying to get correct information out to anxious voters dealing with misleading claims from the White House and on social media.

For Gail Pellerin, the Santa Cruz County registrar, that meant checking voter registration, calling the county’s district attorney, the local sheriff’s department and the Department of Homeland Security so she could definitively tweet that Maggie Magoo “did NOT register and vote in our county.” The dog’s owner claimed in a Facebook post that Maggie Magoo had voted by mail using her microchip number as a Social Security number.