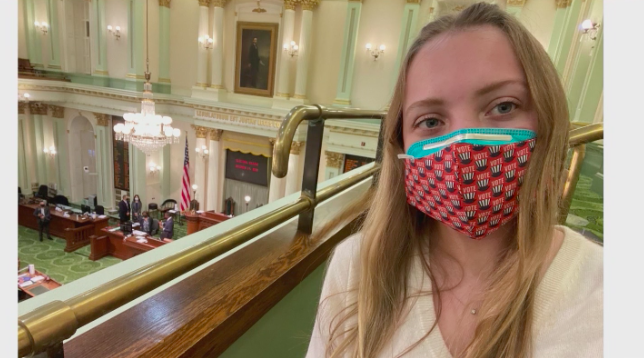 Erin Sturdivant in Sacramento at the state capitol for the electoral vote on Dec. 14.

Erin Sturdivant, 19, a political science major at the University of Oregon and a Piedmont High School graduate, was the youngest member of the California delegation to cast an electoral vote for the Biden-Harris team on Monday, Dec. 14. Sturdivant’s uncle, Congressman Harley Rouda from Orange County’s 48th District, nominated her for the position. She had worked on his campaign earlier this year; this is also the first presidential election she was eligible to vote in.

How electors are chosen varies by state. In California, “on or before October 1 of the presidential election year, each party’s nominee must file a list containing the names, addresses, and telephone numbers of the 55 electors pledges to him/her. Each party determines its own method for selecting electors,” according to the California Secretary of State website.

In the Democratic Party, each congressional nominee and each US Senate nominee (determined by the last two elections) designates one elector, (You can see the full list of all 55 California electors HERE.)