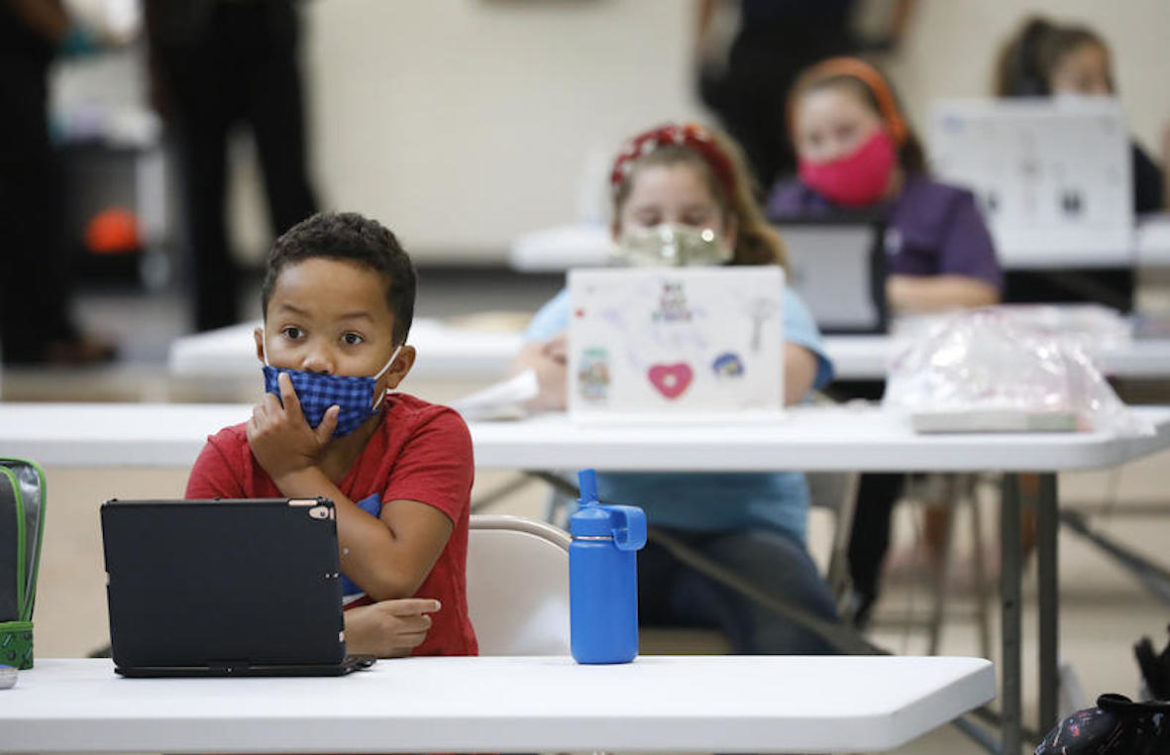 The surge in COVID-19 cases in California is coming at exactly the wrong time for school districts contemplating reopening schools for in-person instruction.

Before the surge, the majority of students in the state were still getting classes via distance learning, but schools were reopening at an accelerating pace. Many others districts were looking to the beginning of January, after the winter break, as the date when they could possibly bring more students back to school.

With January just a month away, those plans are now shrouded in uncertainty. Especially in the wake of Gov. Gavin Newsom’s grim projections on Monday, including a possible stay-at-home order, the odds are low that the virus will be sufficiently under control, and counties will get the green light to bring students back to school after the winter break.

Over the past few weeks, Santa Ana Unified, one the state’s largest districts with 50,000 students, had begun bringing small groups of students to campus for its “Learning Labs.” However, the district planned to open in January, teaching more students using a hybrid model combining in-person with distance learning. But those plans are now on hold, school officials said.

Another large district — San Bernardino City Unified, with 53,000 students — has gone a step further by announcing that its schools will remain in distance learning mode for the rest of the school year.  That means by the time students start school next fall, most will have been out of regular school for nearly 18 months.

Safety, interim Superintendent Harold Volkommer explained, was the  most important consideration. “The number of confirmed cases is rising steadily, with an anticipated and continued increase due to the holiday and flu seasons,” he said, acknowledging the “longer-than-originally-expected use of distance learning as our primary instructional delivery model.”

No other large district has announced a similar drastic action. But with the pandemic at its peak, and likely to get worse, the specter of schools being closed for in-person instruction until the end of the school year, other than to small groups of high-needs students, is now a prospect that more school administrators — and parents — may have to face.

This week, the public interest law firm Public Counsel filed a lawsuit on behalf of several Black and Latino students from Oakland and Los Angeles, itemizing the shortcomings of distance learning, and charging that the state has “abdicated its responsibility” in denying students “the basic educational equality guaranteed to them by the California Constitution.”

But regardless of its outcome, the lawsuit will be powerless to slow the virus’ spread.

Just a month ago, the number of schools bringing at least some students back to their campuses was accelerating. Only nine of the state’s 58 counties were in the Tier 1 “purple” zone.  That meant that under state rules, two-thirds of California’s students were in schools that were allowed to bring back students for in-person instruction in regular classes.

Most districts did not take advantage of this opportunity, for a range of reasons. In many districts, teachers through their unions remain strongly opposed to opening classes for safety reasons. Not all parents necessarily support opening schools either. And in many cases, individual counties and districts, most notably Los Angeles Unified, the state’s largest, have set stricter standards than the state for in-person classes.

School plans may be put on hold

But an EdSource survey of 58 counties at the end of October found that all or most school districts in 21 counties — overwhelmingly in more remote, rural areas of the state, with the notable exceptions of Orange and San Diego counties — were bringing back students for at least some in-person instruction, or were planning to do so within days or weeks.

In recent months, numerous research reports have concluded that schools are not the primary drivers of spreading the coronavirus.

But that doesn’t mean there is no risk at all. Administrators have had to balance the pressures they feel to bring students back to school, and the relative risk that in-person instruction presents to teachers and other staff, and to older children especially — and to their families.

Most public health officials, including the most prominent, Dr. Anthony Fauci, have stressed the importance of opening up school campuses. “The default position should be to try as best as possible, within reason, to keep the children in school, or to get them back to school,” he reiterated over the weekend in an interview on ABC’s “This Week.”

But that statement, with qualifiers such  “as best as possible” and “within reason,” was hardly definitive, leaving school and elected officials with wide latitude in deciding what to do.

Complicating the decision-making process is that there is rarely unanimity in a community about whether schools should reopen.

“I have seven board members, 3,500 teachers, and thousands of parents, and they all have different opinions,” Chris Hoffman, superintendent of the 65,000 student Elk Grove Unified District near Sacramento, said recently in an interview for EdSource’s podcast “This Week in California.” “That is just the reality.  There is no set opinion.”

The district had negotiated an agreement with its teachers’ union that if Sacramento County entered the “orange” tier, teachers would be willing to come back to school for in-person instruction by mid-November. “I really thought we would have kids back in school by then,” Hoffman said.

But the virus upset all those plans. Instead of being in the orange tier, the county is now in the purple tier. “We are not giving up,” said Hoffman. “We want to get our kids back. There are so many benefits to having them with us in person.”

But if in-person instruction gets delayed much beyond January, he said, “I do believe that the further you go, more and more families will say, ‘it (distance learning) has worked until this point; our kids are safe,’ and choose to stay in this mode. That will not surprise me at all.”

Under seemingly contradictory state regulations, if schools in counties in the purple tier had previously reopened for in-person instruction, they can remain open. But if schools had not reopened before their respective counties were designated purple, they now cannot open schools until their counties are back in the “red” tier for at least two weeks.

As the pandemic reaches crisis levels, some districts are feeling pressure to close schools they had previously opened.  That’s happening even in Marin County, one of the seven counties that has so far escaped the purple tier designation. For example, Miller Creek School District, an elementary district with just over 2,000 students in San Rafael just north of San Francisco, has suspended in-person classes until the end of 2020 as positive cases in the county rise.

“Given the local surge in cases, the recent travel recommendation for a 14-day quarantine upon return to the county, and competing instructional demands within our schools, the district has made the proactive decision to return to remote learning for all students starting Monday, November 30th and to continue remotely through December,”  superintendent Becky Rosales explained on the district’s website posted on Thanksgiving Day.

For now, all students in the district are back to distance learning.  When they will be able to return to school is unknown.

Most of California’s 6.2 million public school students, and hundreds of thousands more in private and parochial schools, are similarly in the dark.