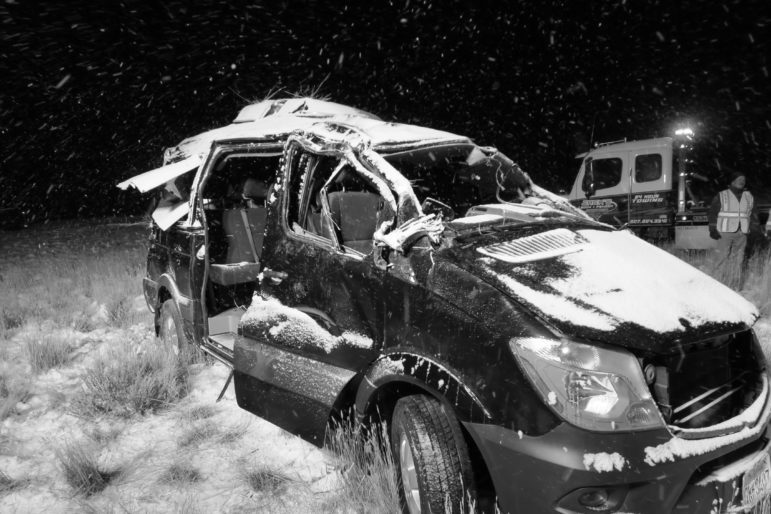 A little over a year ago Max Becker hopped into a van to catch a ride to the next gig for SWMRS, the successful punk-rock band he formed with his brother and two Piedmont High school pals. But that ride delivered him to an unexpected destination.

The van slid that night on a Wyoming highway and rolled over. Its three occupants were all injured: Josh Berl of Piedmont, the band’s sound engineer, broke an arm and took a gash to his head. Photographer Natalie Somekh was stunned but able to climb out of the van and flag down help. Max, who was not buckled in, was hurtled through a window as the van tumbled, landing hard on the median.

He awoke wired up in a hospital bed to the sight of his family and his girlfriend gazing at him. He had no memory of the accident. His toes were numb. His injuries were severe: a broken shoulder, a broken knee, a cracked rib, a broken scapula, a busted spinal disc, injuries to a cranial nerve, and a shock to the head so severe that a brain surgeon hovered nearby. His chances of recovery were unknown.

The next few months were an odyssey of doctors, medical tests, an air ambulance ride, two hospitals, and finally getting the all clear to fly home to his parents’ home in Piedmont and to move his rehab to Kaiser hospital. Because of the blow to his head he’d need to go slow, mostly staying quiet and indoors, giving his brain time to heal.

“I remember crying when we touched down on the tarmac at Oakland Airport,” said Becker. “I had just gone through the closest thing you can get to dying, but I didn’t die.”

He had to adapt to a new life. “Before the crash I was living completely differently,” he said, “playing 150 gigs a year and living out of a suitcase. That all came to an abrupt halt.” The accident also delayed plans he and his girlfriend, Michelle Smolarski, had made. In early 2020 they planned to move in together to an apartment in Washington, D.C., where she works for Unilever and is studying for an MBA. That would have to wait.

In a strange way Max was at peace with the idea of several quiet months ahead of recuperation, even if that meant living as a shut-in and looking out at the world through a window. “I thought I’d hit rock bottom with the car crash and there was no place to go but up,” he said.

Then COVID-19 struck and the whole world got shut inside, too. For Michelle, who spent much of the summer with Max in California, being locked down by the pandemic had a silver lining. “I know most people were made crazy by being cooped up so much, but for us we felt so grateful to have the time together,” she said. As Max recovered he slowly began to gravitate back to music, offering guitar lessons online from his home. Besides his injury, COVID had put the band on hiatus.

But in a year that saw the pandemic, wildfires, unhealthy air in much of California, and flaming nationwide street protests over the police killing of George Floyd, Max’s band SWMRS had a train wreck of its own making. In July on Instagram, Lydia Night, leader of the LA band The Regrettes’ accused SWMRS drummer Joey Armstrong of emotional and sexual abuse. Lydia has 500,000 Instagram followers. Joey responded that he did not agree with everything Lydia wrote, but apologized and promised to do better. Still, it was not a good look.

In the summer Max moved to DC to join Michelle, and with her encouragement and his dad’s, he enrolled in Boston University’s online program. His recovery from the crash continues and he jogs regularly to help strengthen his knee. Max says being in DC with Michelle is yet another transformation in a year that threw plenty of curve balls at him. “I have another brand new life. I saw Jared Kushner the other day,” he joked.

Michelle says when they are not dealing with schoolwork or shopping, the two of them like to play backgammon. Said she: “You can’t control the dice you roll. The strategy is what do you do with what you roll. How do you win the game? It’s like life.”

One thought on “Out of the wreckage”