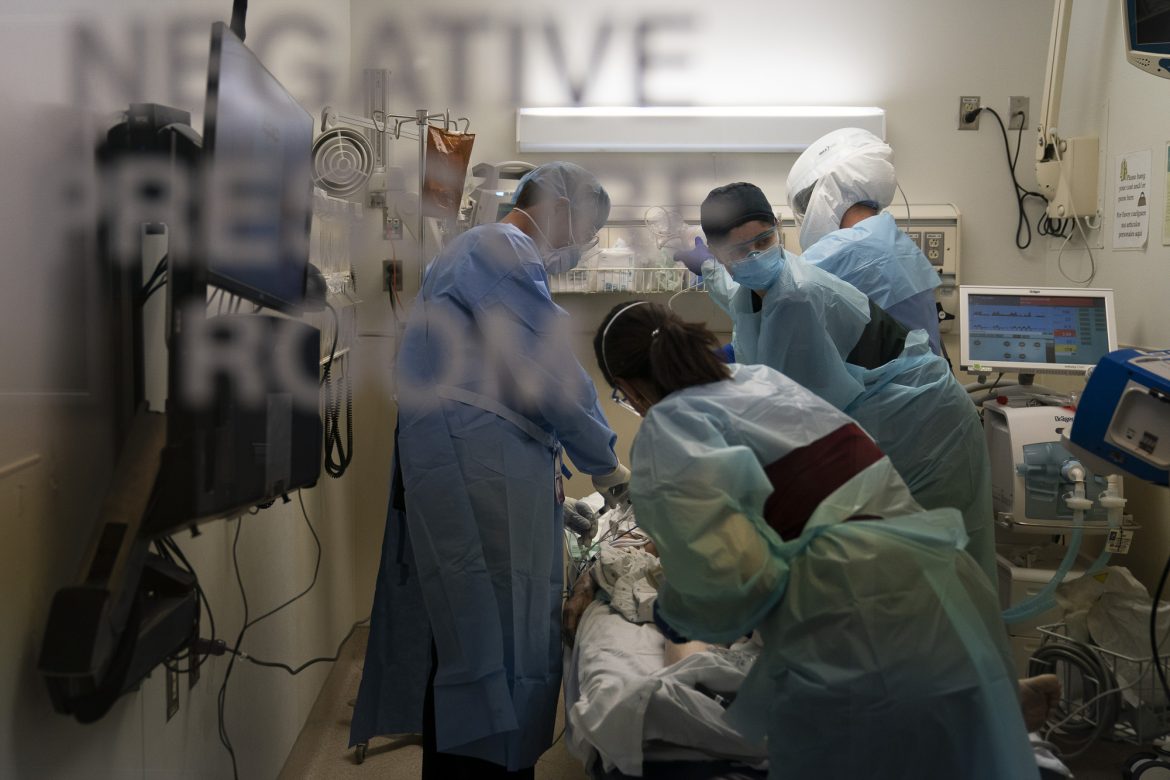 An EMT performs chest compression on a patient who tested positive for coronavirus in the emergency room at Providence Holy Cross Medical Center in Los Angeles on Nov. 19, 2020 (AP Photo/Jae C. Hong, File)

In the face of a “surge on top of a surge,” Gov. Gavin Newsom announced today the strictest measure in months for a regional stay-at-home order tied to the number of ICU beds as hospitals near their capacity in the face of a statewide coronavirus surge.

Though no region has met the threshold, the governor is warning parts of California could cross the new threshold for mandating people stay within their households as much as possible when a region’s ICU capacity drops below 15%.

“We are at a tipping point in our fight against the virus and we need to take decisive action now to prevent California’s hospital system from being overwhelmed in the coming weeks,” Newsom said in a statement.

Under the order, people will have to stay home as much as possible, although they can still go out for essential things like groceries, exercise and doctor appointments. K-12 schools that have reopened can remain open, and retail stores can operate indoors at 20% capacity. If triggered, the stay-at-home order will be applied for three weeks by five regions: Northern California, Bay Area, Greater Sacramento, San Joaquin Valley and Southern California.

California is kicking off what could be the worst month of the pandemic yet. California’s intensive care beds are filling up. At least one county, Imperial, is again transferring patients to hospitals outside county lines, according to the California Hospital Association. In the spring, Imperial County sent more than 500 patients to hospitals as far as Sacramento and the Bay Area. Now, the fear is that holiday gatherings will add fuel to the current spike in new infections.

“The effects of Thanksgiving, they have not yet been felt,” Newsom said. “They will be felt in a number of weeks.”

By Christmas Eve, 112% of the state’s ICU beds could be occupied if current trends continue, Newsom said earlier this week. On Wednesday, the state recorded more than 18,500 new cases, Newsom said — the most in a single day since the pandemic began. With the new restrictions, he said the state hoped to head off “too much concentrated retail activity” during what is normally the busy holiday shopping season.

For businesses and their workers, the big test will be whether keeping their operations going at limited capacity will be “productive enough” to prevent mass closures and job losses, said Julien Lafortune, a research fellow who has studied unemployment during the pandemic for the Public Policy Institute of California. The state’s jobless rate dipped back into single digits in October at 9.3%, down from a high of 16.4% in April, but many businesses are confronting months of accumulated losses just as the virus explodes.

“We can keep businesses open right now,” Lafortune said, “but a lot of people wouldn’t go out.”

The new stay-at-home order is softer than what Newsom announced in the spring. On March 19, California came to a standstill after Newsom declared the country’s first statewide shelter-in-place order. All schools closed their doors and resorted to Zoom lectures; restaurants and bars ceased operations, leaving many workers in limbo; and those who could, began their working-from-home odyssey.

The new shutdown order comes at a precarious moment for the California economy. Home prices have surged to record highs, and declining unemployment decline has fueled what economists at UCLA called “an unequal economic recovery.” Though vaccine optimism has boosted the stock market in recent weeks, those gains could recede this winter as the virus surges, UCLA Senior Economist Leo Feler cautioned in a forecast released this week.

For many caught up in job cuts — which have disproportionately hit Black and Latino Californians, as well as women pushed out of the workforce to care for children — the next few weeks were already going to be stressful. Some 750,000 state residents will lose federal unemployment benefits on Dec. 26 if current deadlines hold, and more than 700,000 households are in danger of losing their rental homes as eviction moratoriums lift weeks later.

“The pandemic has been an inequality bomb,” said Micah Weinberg, CEO and president of progressive advocacy group California Forward. “What people want to see is a plan for an equitable economic recovery that is as serious, as well thought out and as well-funded as the plan to shut everything down.”

“We’ve been calling for another shutdown since 41 out of 58 counties were in purple,” Roberson said. Now 52 counties fall in the purple, most restrictive tier. “I think now is the time. We can try to piecemeal this out, but it’s so widespread we need to take a statewide approach.”

Even before Newsom’s announcement, experts were betting a lockdown order in December would look different than what the state saw in March.

Exactly how the stricter regulations play out for businesses will likely come down to legal battles already underway. Earlier this week, a judge ordered Los Angeles County officials to provide more health evidence for shutting down outdoor dining in addition to indoor restaurants and retail. The lawsuit was backed by the California Restaurant Association, one of several business groups to demand more specifics about how regulators are evaluating public safety and calibrating restrictions.

At the same time, the state has attempted to respond to ongoing concerns about a lack of enforcement for worker safety protocols by issuing new emergency rules for employers. The standards, which went into effect earlier this week, by the Department of Industrial Relations call for site-specific health plans, reporting instances of multiple infections to public health officials and providing masks to all workers. Santa Clara County has also added new quarantine requirements for businesses that ask workers to travel long distances.

In the meantime, the stalemate drags on over whether Californians will see another major round of individual stimulus checks or business loans. The state announced new tax extensions and $500 million in small business grants this week, but Congress remains divided over offering more federal aid before the end of the year, setting the stage for a state battle in the year ahead over how to redirect limited funds to struggling businesses, workers and others.

“We can’t expect the federal cavalry will arrive and bail us out of all of this,” Weinberg said. “The state will have to deal with some budgetary cuts, but it’s actually more our straightjacket budgeting systems that are the problem here.”

Newsom, meanwhile, said the state is focused on stemming the tide of the virus with another round of restrictions now, just months before mass vaccinations could begin.

“There is light at the end of the tunnel,” he said.