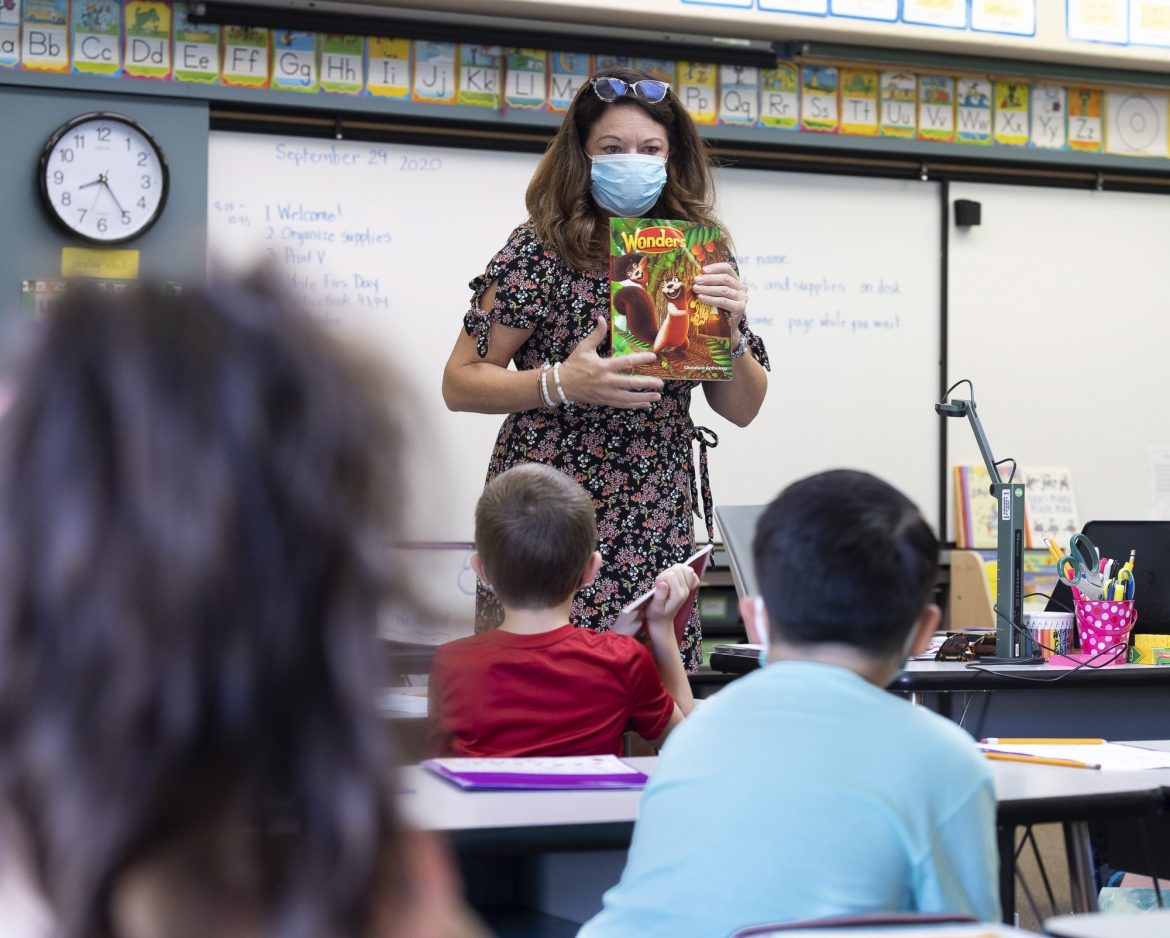 Schools would only qualify in counties with lower infection rates. Kindergarten through sixth grade is prioritized in the governor’s $2-billion plan, which would need the Legislature’s approval.

After painting a dark forecast for the pandemic earlier this week, Gov. Gavin Newsom today offered parents and students some hope: He has a $2-billion plan for schools to start in-person learning by spring.

Newsom’s January budget will call for providing a  one-time payment of $450 per student to school districts that offer in-person instruction to help cover their extra costs related to the virus.

The phased-in approach would prioritize the state’s youngest learners, kindergarten to sixth grade, beginning in February, Newsom said. Distance learning will remain an option for families, he said. Schools serving low-income families, English learners and foster youth could qualify for more than $450 per student, according to the plan posted by the California Department of Public Health.

The proposal would need the approval of the Legislature, since it’s a major increase in spending for the state’s budget.

“It’s a good start, and we look forward to partnering with him on the details,” said Sen. John Laird, a Democrat from Santa Cruz who is chairman of the budget education subcommittee.

The announcement comes as California faces the toughest time in the pandemic, with hospitals strained and transmission rampant. A strain of the virus that has a greater rate of transmitting infections has been found in Southern California, Newsom said today.

Newsom’s plan isn’t a guarantee that schools will reopen soon. Schools will only qualify to reopen in counties with a seven-day average coronavirus case rate of 28 per 100,000 residents, and they must publish a safety plan.

That means students in the most highly populated and hard-hit counties, such as Los Angeles, Fresno and Riverside, probably will have to wait longer to return to in-person learning than students in other areas with lower infection rates. Los Angeles County, for example, currently has 7,209 infections per 100,000 residents, a rate that is 257 times higher than the state’s guideline, according to the county’s surveillance dashboard.

For months, school leaders have been pushing Newsom to enact a plan for reopening. In a November letter, superintendents from across the state asked Newsom for additional funding and a “common standard” for reopening.

“As we plan for a new semester…there is a pressing need for a clear and consistent set of guidelines which would set forth the health, education and employee practices and standards needed to reopen our schools, and keep them open,” the letter said.

The extra state money could help deflect concerns of school districts about the cost of reopening with social distancing procedures and other steps needed to reduce the risk of infection.

Newsom said the state will support schools with frequent coronavirus testing of students and staff, contact tracing and personal protective equipment. Staff and students will have to wear face coverings — surgical masks are recommended for staff, according to the plan.

Reflecting on his own experience as a parent with four young children, Newsom said, he is aware younger children have a harder time learning online.

“Kids are learning. They’re just not learning equally,” he said.

In California, elementary schools are allowed to seek waivers to reopen even if they are in the purple, most restrictive tier of the state’s colored-tier system. But the majority of the state’s students are in schools that have not reopened and continue to learn via Zoom, a system that has notably hurt students without reliable broadband connection.

Some officials noted that risk at schools is minimal. Among California’s 24,738 COVID-19 deaths, six have been among children under 17. “Many of our school districts are open, and they are open safely with little or no transmission, even in this time,” said Linda Darling-Hammond, the president of the California State Board of Education.

The state’s department of public health points to a Centers for Disease Control and Prevention study that shows transmission among students is uncommon, and that children are more likely to become infected in social gatherings and other less-controlled environments.

Dr. Anthony Facui, who today spoke to Newsom in a live-streamed event, said reopening schools is important for children and their mental well-being, but also for working families. “If you really want to get society back to some form of normality, one of the first things you have to do is get the children back in school,” said Fauci, who is the nation’s leading infectious disease expert.

Newsom has been pressured by parents and legislators to reopen schools as many children fall further behind in their studies. But California’s largest teachers union has sought to slow down back-to-school plans. The California Teachers Association sent lawmakers a letter this month saying schools in purple tier area should not re-open.

Newsom said his plan got buy-in from the CTA. “The vast majority of what you’re hearing today has come from their input,” Newsom said today.

But E. Toby Boyd, president of the CTA, said that the union will continue to support distance learning while California remains a COVID-19 hotspot.

“We have been calling for tougher safety standards, rigorous and consistent testing, data collection and transparency. While these tenets are addressed in the proposal released Wednesday, there are many unanswered questions and the devil is always in the details, particularly as it relates to implementation and execution,” Boyd said in a statement.

Despite the restrictions in Newsom’s plan, Raquel Laguna, a teacher at a Los Angeles charter school and vice president of the teachers union that represents the 19 Green Dot Charter Schools, said she still worries that the financial incentive in Newsom’s plan may prompt school administrators to vie for the funds even if COVID-19 cases in their communities are high.

Troy Flint, spokesperson for the California School Board Association, which represents the state’s school boards, called Newsom’s plan promising, but agreed that a lot rides on the details.

“If staff are able to get vaccinated prior to return, I think that’s the ideal, but there will certainly be some school districts that will want to move more rapidly,” Flint said in an interview with CalMatters today. “A lot will depend on community input and the relationship between district governance teams and their labor unions.”

A coalition of superintendents from school districts that enroll more than a million students expressed support for bringing students back to the classroom, but fell short of endorsing Newsom’s plan today. The group promised to “look carefully” at the plan and provide feedback before lawmakers reconvene Jan. 11.

Earlier this month, a group of legislators introduced legislation, AB 10, that starting March 1, would require public schools to reopen soon after they get permission from public health authorities.

Under the proposal led by Assemblymember Phil Ting, a San Francisco Democrat, public schools would need a plan for their transition to in-person instruction within two weeks of their county coming off the most-restrictive tier.

Assemblymember Patrick O’Donnell, a Democrat from Long Beach and chair of the K-12 education committee, said he needs to determine whether Newsom’s plan aligns with the bill, which he co-authored. “We’ll see how the two plans comport or don’t,” he said. “AB 10 is very much alive and it has not gone away.”

Assemblymember Jordan Cunningham, a San Luis Obispo Republican, earlier this month sent a letter to Dr. Mark Ghaly’s office, Newsom’s secretary of health and human services, asking that teachers be next in line for the COVID-19 vaccine.

“Get teachers vaccinations, get them masks, get them socially-distanced classrooms, do what it takes,” Cunningham said.

The state is scheduled to finalize plans today for who will come next in the vaccine line. Teachers are expected to be prioritized in the next group.