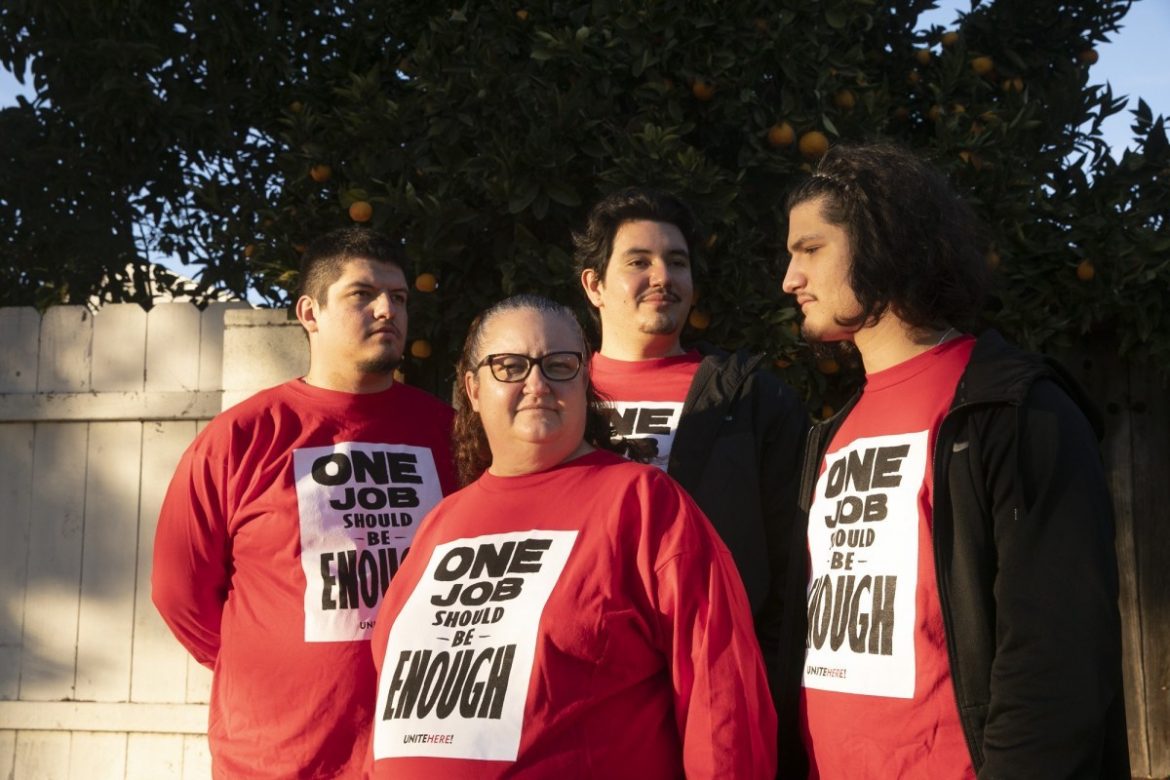 Monica Corona, center, with her sons, from left, Christian, Alfonso and Nicholas, at Washington Manor park near their home in San Leandro on Dec. 19, 2020. Corona and her sons all lost their jobs at Oracle arena in March after the state-mandated shelter in place order went into effect. Photo by Anne Wernikoff for CalMatters

For 21 years, Monica Corona has served food and drinks at Oakland Arena during concerts and basketball games, rising in the ranks to concessions lead and even recruiting her three sons to work there.

But since March, there have been no fans for them to serve. Corona and her sons joined an estimated 2,900 stadium workers in the Bay Area placed on furlough, according to union estimates.

The family has struggled to make ends meet off of unemployment benefits and Corona’s husband’s salary.

Even more devastating would be the potential loss of health benefits. Because her healthcare is tied to working the previous season, Corona’s coverage is set to expire in February.

“I’m not going to be able to afford anything that’s out there,” she said. “I just don’t know what I’ll do without having medication for my husband, who takes seven pills a day as seizure medicine, and then with my daughter’s asthma medicine also.”

In California, football games are being played with no fans due to the state’s ban on large events. It was the same for soccer this fall. The entire Major League Baseball season — including playoff games in Los Angeles and San Diego — was played with no spectators; the Dodgers won their World Series title playing in Texas. And basketball teams played last season’s championship games in a “bubble” in Florida, and this season, which starts today, Lakers, Kings, Warriors and Clippers games will be played in empty stadiums.

Anand Singh, president of UNITE HERE Local 2, which represents 1,000 stadium workers at the Giants’ Oracle Park and the Warriors’ Chase Center, said 2020 has exacted an “incredible toll” on employees in the sector.

“You’re talking about a group of working people that are already kind of living on a razor’s edge in the Bay Area, trying to piece together salaries year round on seasonal sporting events,” he said.

“We’re talking about people who are overwhelmingly people of color. You’re talking about workers who, because they’re in these communities, maybe have the highest predisposition to testing positive for COVID-19 and actually dying from COVID-19.”

Singh said the fact that these employees are likely to lose their health care at this point in the pandemic is illustrative of a “broken” system of employer-based health care.

In addition to urging employers to continue health benefits, he said unions will be pushing legislators in Sacramento for “meaningful and serious health care reform” based on these workers’ experiences.

Jim Kohler, west division president for Levy Restaurants, the food service contractor at Oakland Arena, said in an email that the company has extended health benefits to February despite their contract with the arena expiring Nov. 30.

“We have and continue to welcome open discussions with the union based on our active contracts,” he said. “It’s no secret these continue to be tough times for the hospitality industry nationwide, but we remain hopeful to welcome team members and guests again in 2021.”

The Bay Area unions have already negotiated “recall rights” for their stadium workers, meaning employees should be able to return to their former positions, rather than be replaced by new hires at a lower wage. Still, Singh said enforcement of those provisions will largely fall to local governments, such as the cities of Oakland and San Francisco, which passed emergency ordinances earlier this year.

Corona said strong enforcement of recall rules will be critical because she can’t see herself starting over from the bottom again at age 49.

“A lot of companies are, from what I’ve been hearing out there, taking younger people where they can just pay them pennies, basically,” she said. “Being in the company for 21 years, you know, working your way up … to lose all that, that’s very devastating, worrisome — basically, you’re throwing your life away.”

It’s not just seasonal employees who have lost their jobs — it’s the full-time front office people, too. The Oakland A’s laid off 20% of their baseball and business operations employees in October, and the Dodgers laid off an unrevealed number last month.

The franchises earned money from TV contracts, but not a penny from fans or concessions or other marketing promotions. Dodgers President Stan Kasten reportedthat the team’s 2020 losses were “well north of $100 million.”

University of Oregon marketing professor John Clithero, who studies sports business, said the pandemic has forced teams and leagues to reassess their business models. But one thing that hasn’t changed is the importance of preserving brand image in the communities they serve.

“Teams invest a tremendous amount of time and effort to integrate with the community,” he said.

Clithero said that public pressure might push teams to continue paying some employees.

“I hope, and would expect, teams can realize the value in working with partners who try to maintain support for their employees,” he said. “It’s still going to be awhile before it’s safe to fill up a stadium or an arena, so the economics is quite challenging.”