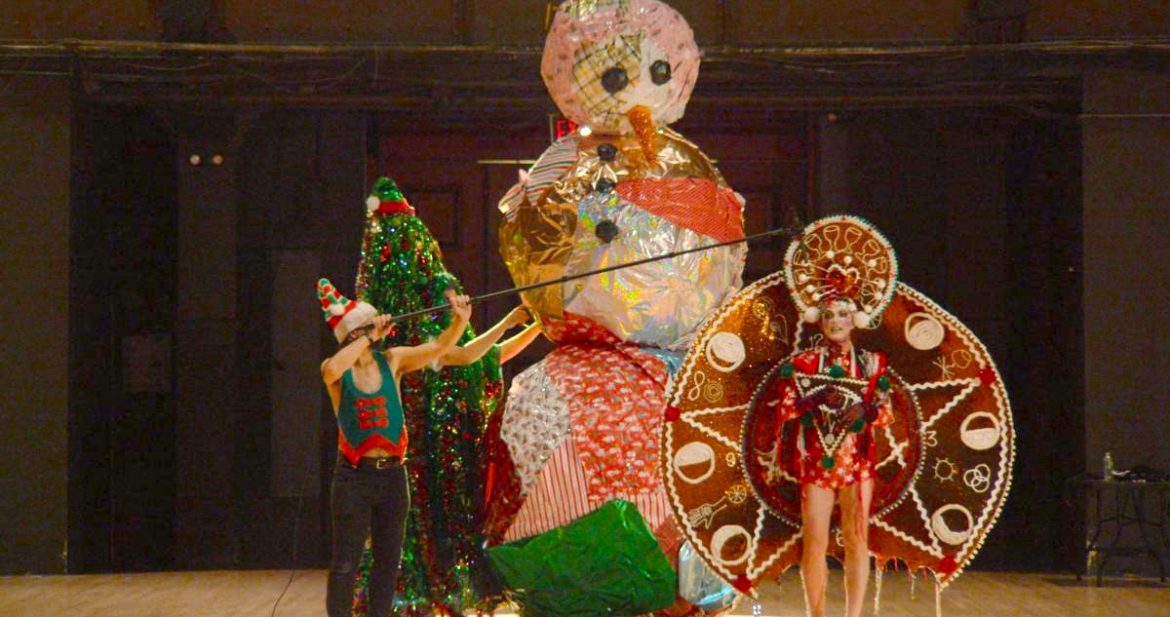 When MacArthur Genius and Obie Award-winner Taylor Mac was 14, judy (Mac’s pronoun) witnessed the first AIDS Walk in San Francisco. It was also Mac’s first time seeing thousands in the LGBTQ+ community out and proud, and it was the Sisters of Perpetual Indulgence who inaugurated judy to the glamour and power of drag.

This experience would stay with Mac well into adulthood, and ultimately inspire judy’s Pulitzer-nominated work, “A 24-Decade History of Popular Music,” in which Mac — bedecked in everything from wine-cork wigs to an enormous rainbow peace sign to a headpiece made of old school 3D glasses — dedicates an hour of the day to every decade in American history expressed in a song that judy believes exemplifies that era’s pop-culture psyche.

This year, Mac has a new rendition of a more recent show, and one suited to a holiday indoors. On Saturday, Stanford University and San Francisco’s Curran Theater, where Mac has formed live before, will host “Holiday Sauce … Pandemic!”

Like the 24-hour show, “Holiday Sauce” examines works of the Western holiday canon, like “Little Drummer Boy” and “Silent Night,” through burlesque and vaudeville by over a dozen performers across Europe and the United States. Mac and judy’s longtime collaborators at Pomegranate Arts, including costume/wearable art maven Machine Dazzle, musical director Matt Ray and Pomegranate Arts’ founder Linda Brumbach, have reunited for the livestream from a Brooklyn venue, with a prerecorded backup, just in case.

“Our field has been really decimated; we’ve been running on fumes,” says Brumbach from her home in New Jersey. “It was time to take a breath, so we spent the summer doing film projects in the woods. It begged the question, what will the holidays look like when people have lost so much?”

This is Brumbach’s third year of working together on “Holiday Sauce” after connecting with Mac in 2013. The show features 18 collaborators across the states and as far as Oslo and Madrid for a “cabaret vaudeville.” In addition to the livestream, Pomegranate Arts produced a record of the 50-minute show available on Bandcamp and will donate a portion of the proceeds to the LGBT Asylum Task Force. On tour, Mac has traditionally honored an elder in the audience from the local community; this year there are 18 elder honorees, one for every artist appearance.

“Taylor celebrates the season in all its dysfunction! He puts his cathartic spell on everyone,” Brumbach says. “So much of Taylor’s vision is the collective power of your chosen family around the holidays.”

Machine Dazzle, the show’s costumer as well as longtime collaborator and friend of Mac’s, might have pulled an all-nighter finishing up a new costume, of “flora n fauna bathed in glitter and mylar.”

Dazzle is entirely self-taught, creating wearable art pieces that blend found objects, fashion and a lot of glitter. He collaborated with Pomegranate Arts for the first time for “24-Decade History” at Taylor’s introduction, and contributed to the film project slated for early 2021, “Whitman in the Woods.”Designing for a livestream differs a bit from the stage.

“I was thinking of Taylor as a painting, framing him [for Zoom]. I think in this country in particular, with the pandemic, things are changing. I see this new Renaissance coming,” Dazzle says. “I love things that are queer. Queer means you don’t settle.”

* Tickets for the 7 p.m. Saturday livestream are available on the Curran Theater website. All of the proceeds go to OPENHOUSE, a San Francisco nonprofit providing services for LGBTQ+ seniors.