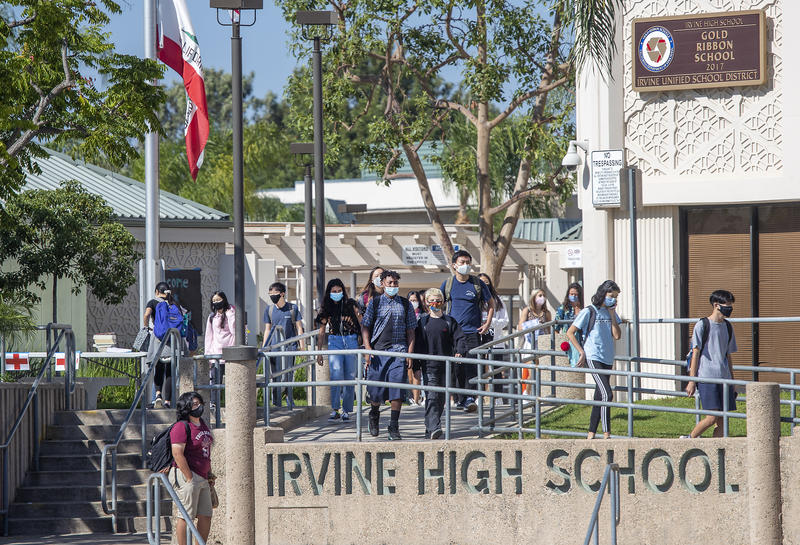 Looking beyond the state-ordered Covid lockdown that has shut down all but essential services in all but a handful of counties in California, three Democratic Assembly leaders proposed legislation Monday that would require public school students to physically return to school in stages by early spring, after public health officials lift closure orders.

The effect would be to start reopening schools for at least the most struggling or perhaps the youngest students when their counties move from the most restrictive purple tier, where 99% school districts are now, to any less restrictive color: red, orange or yellow.

Assembly Bill 10, which has not yet been electronically posted, signals the growing impatience of parents and some legislators that schools have been slow to reopen to in-person instruction and have ignored the needs of low-income students and English learners who have foundered under distance learning. There is new evidence that persistent gaps in learning between those students and others have grown during the pandemic (see here and here).

The bill would make clear what they say has been the Legislature’s intent since the pandemic struck last March, that in-school instruction be the priority, conditions permitting.

“If a health order is lifted, schools should be back in session, with accommodations for vulnerable students and teachers,” O’Donnell said in an interview Monday.

As emergency legislation, to be acted on soon and to take effect immediately, the bill will require a two-thirds approval of the Legislature – a daunting challenge coming in the darkest period of the pandemic. But the bill could also add pressure on Gov. Gavin Newsom to act on his own, which Ting and other legislators had been calling for previously.

O’Donnell said the intent is to “inject a sense of urgency” and to “push and prod” district administrators and unions back to the table to get a plan for fully ready for reopening schools.

Edgar Zazueta, senior director of policy and government relations for the Association of California School Administrators, said that “at first glance, the bill appears to meet the spirit of what we have been hearing from education leaders, that the state should take a more proactive approach to reopening — to tell school not only when we can but should proceed to reopen.”

“At the same time,” he said, “we are going to be sensitive to protect local control and unique circumstances on the ground.”

Most districts, including the largest urban districts, have remained in distance learning since March. Other districts, primarily in rural areas and in parts of San Diego, Orange and Marin counties, have reopened mainly under a hybrid setting for a partial return for in-person instruction for those families who want to return.

Some pre-K-6 schools in counties in the purple tier received waivers to reopen and can continue to operate under the state’s latest Covid clampdown, although no new waivers are permitted. And an unknown number of districts have opened schools for tutoring, counseling and special services for individuals or small cohorts of special education, homeless and foster children, however, some districts, including Los Angeles Unified, have now suspended these operations.

The bill would not set the timing for when districts should send most students back to schools or the instructional model — whether a hybrid setting for a partial return or in-person instruction for those who want to return. And it would assure that students who cannot or would prefer not to return physically to school can continue in distance learning. But it would require districts and charter schools to publicly adopt a plan to offer in-person instruction within two weeks after state and county health departments issue orders allowing school campuses to be open. Under the current system, that would mean moving a county to red, the second-least restrictive conditions, based on infection rates and numbers of patients in hospital intensive care units.

The bill also states that no later than March 1, districts must develop and implement a plan for “tiered reengagement strategies” for all English learners and low-income, foster, and homeless students — comprising more than 60% of students in the state — “who are performing below grade level.” This provision is more detailed and extensive than the current law setting expectations in Senate Bill 98 that was passed in June with the state budget. Districts and charter schools would have to reach out to those students, some of whom may have stopped attending classes, identify their needs and set up health and social services. Schools would then have a choice of offering in-person instruction at a minimum of 50 percent of instructional minutes required, or creating summer school for in-person instruction .

Other districts were unable to reach agreements with their employee unions for in-person instruction during the summer and fall.

The California Teachers Association and the smaller California Federation of Teachers have been demanding that comprehensive Covid testing, staff training in safety protocols, adequate classroom ventilation and better data on the spread of infections be in place before teachers return to classrooms. Their opposition would be a huge obstacle to passing AB 10.

In an email, CTA spokeswoman Claudia Briggs called the bill a starting point and CTA looks forward to working with authors, educators and administrators.

“We know that parents and administrators share our concerns and in order to return safely, it’s important that we have accurate, transparent data information on Covid-19 case rates and transmission and that there is enforcement of the existing guidelines to safely reopen our schools,” she said. “The inequities highlighted by the pandemic have further disadvantaged some of our most vulnerable students as well as our younger kids. This must be addressed by providing these students with additional supports.”

O’Donnell said that if more resources for testing and other safeguards are needed, legislators will work with Newsom to provide them.