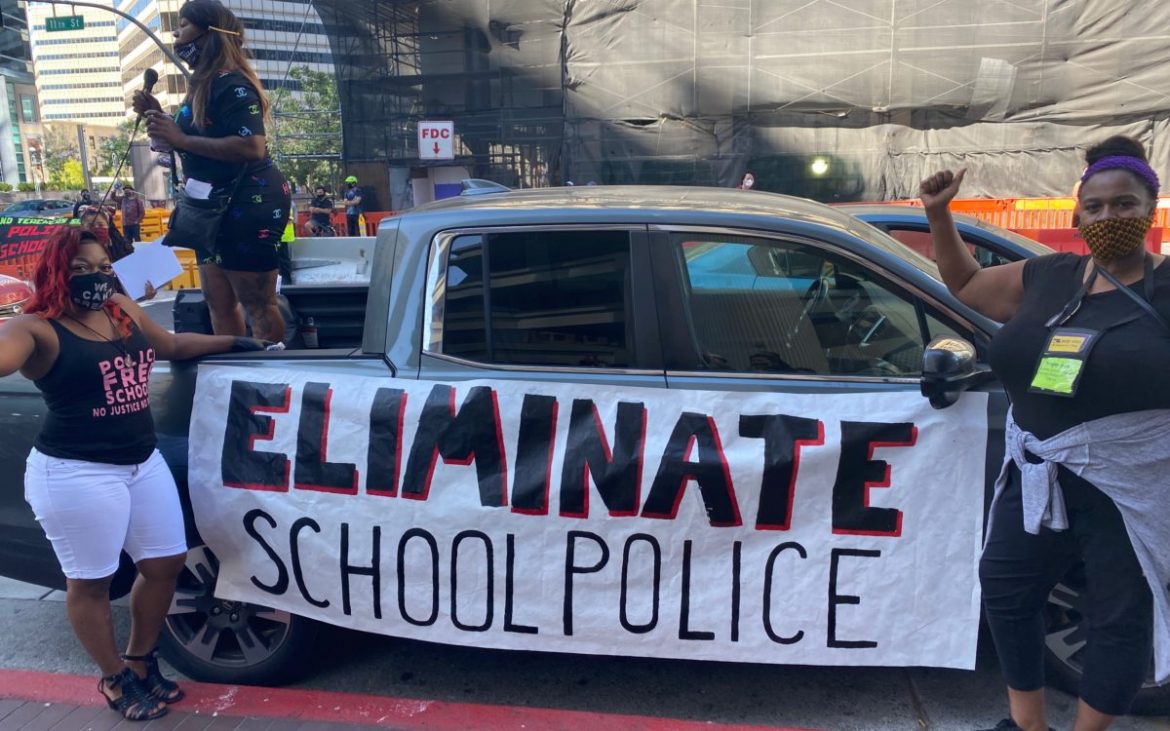 Oakland school board members passed in a final vote Wednesday evening a resolution to remove police from schools, a school district spokesman said.

The final vote on the historic George Floyd Resolution to Eliminate the Oakland School Police Department comes after the initial vote in June.

At least some officers will be on the payroll beyond 2020, but no police will be on any campus in the new year and after that.

“Since our founding, our community has fought to end the criminalization of Black and Brown young people, and ensure Black Sanctuary by investing in alternative models of school safety,” said Jackie Byers, founding executive director of the Black Organizing Project, in a statement.

“Together, we have shown what Black organizing that centers the needs and vision of Black communities can make possible,” Byers said.

Proponents of the George Floyd resolution aim to disrupt what has been a criminalization of Black students and a school-to-prison pipeline for them in local schools.

Proponents provided just a few details of the new plan for school safety, called the Reasonable Compliance Safety Plan, but did say that it’s meant to shift school discipline practices, culture, and climate.

“The Reasonable Compliance Safety Plan gives educators in Oakland a critical opportunity to examine how our practices contribute to the school-to-prison pipeline that is devastating our Black families,” said Keith Brown, President of the Oakland Education Association, in a statement.

“We are grateful for this call to find alternatives for policing on campuses rooted in anti-racism and accountability, and to have BOP’s leadership in this movement.”

Over the course of two to three years, BOP will collaborate with the district to come up with non-police responses to discipline in schools. Those responses will be based in trauma-informed de-escalation.

“To truly transform systems and ensure that Black students are free from racism, implicit bias, fear and physical danger, OUSD must commit to culturally-responsive, trauma-informed de-escalation strategies enacted by trusted adults to respond effectively and compassionately to school discipline issues,” said Jessica Black, organizing director for BOP, in a statement.

Oakland Unified School District spokesman John Sasaki said a lot of the new safety plan is in place and a big part of it is reconditioning staff members, who were calling police many times when calls to police were unnecessary. The task of removing all police from schools will take some time, Sasaki said.

“A police department, even one the relatively small size of Oakland School Police Department, cannot be shut down overnight,” he said.

For example, guns and vehicles need to be disposed of among other things. That cannot be done this year while police are still working.

He said, “We look forward to continuing to work with BOP and the community as we implement our new safety plan, and our students return to campus as we all move beyond the pandemic.”