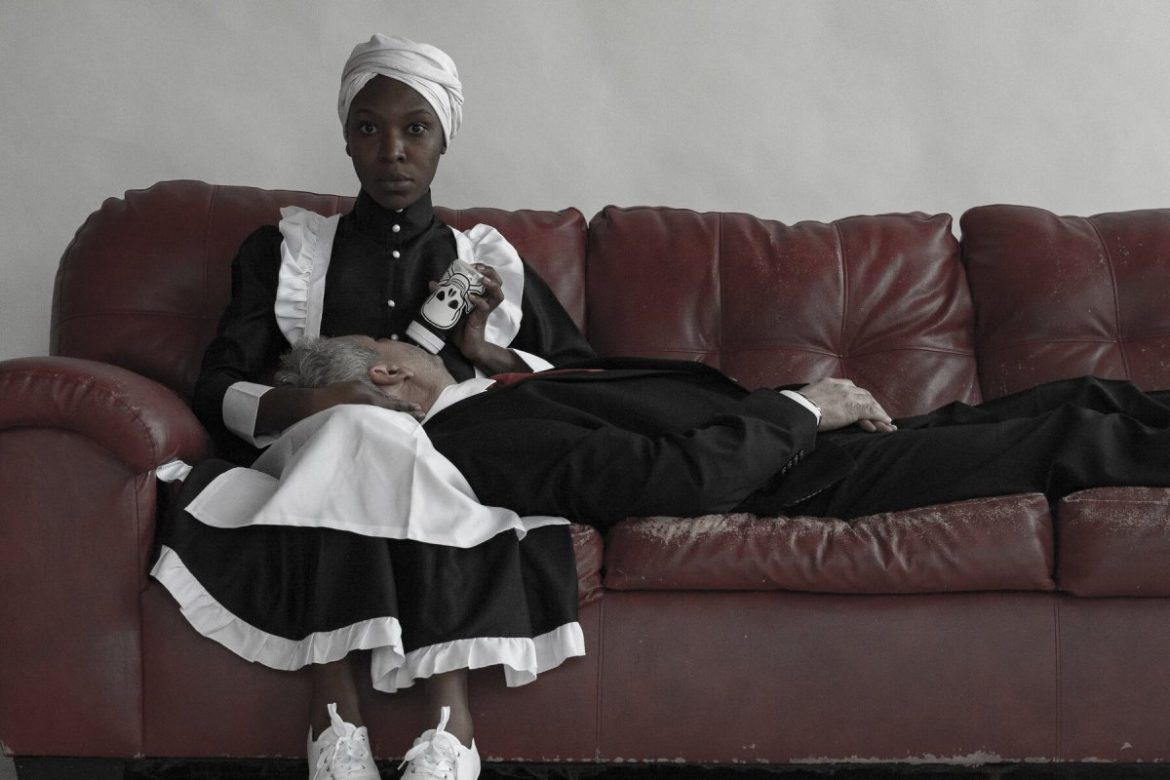 With her “Kulela” series, Kyle Malanda reimagines the historic exploitation of black women’s domestic labor from a place of resistance. (Courtesy of “The Black Woman is God”)

Weeks after the presidential election, the calls of “voter fraud” from the right were matched only by messages of gratitude from the left. Specifically, the latter messages consisted of articles and op-eds thanking Black women for “saving” the election and the Democratic Party as a whole.

Yet, even as the winning ticket boasts the Bay Area’s own Kamala Harris — the first woman and first person of color to be named vice president — it’s hard to believe the U.S. holds Black women in high regard when officers who killed Breonna Taylor still walk free. This paradox is not lost on artist Karen Seneferu.

“Certainly, there appears to be more white allies at the frontlines of protest,” she tells me. “But this can also be problematic if they are not there to support the liberation of Black people.” She aims to change that with the latest incarnation of “The Black Woman is God (TBWiG)”, an annual art exhibition in which the purpose is to let Black women speak for themselves unrestricted.

Like Harris, Seneferu is an Oakland native. She also developed her political leanings early on as she partook of the Black Panther Party’s famous free breakfast program. It wasn’t until adulthood, however, that she began to show any artistic inclination, eventually enrolling at UC Berkeley as a single mother. “I needed art or creativity in my life to get through the university,” she says.

After graduating with a B.A. in English, she put her self-taught artistic skills to use, crafting images with a notably Afrofuturist bent. After meeting fellow artist/activist Melorra Green, the two collaborated on “TBWiG” in 2013 with the intent of challenging the popular Western concept of The Almighty as a white man in a long flowing beard.

The showcase ran annually (except for 2015 and 2019) in separate San Francisco locations before finding its SOMArts home in 2016. It was scheduled to return there this year before the pandemic cancelled those plans, necessitating a move online. For Seneferu, the “extremely positive” response to the virtual showcase has been a boon for the project as a whole.

“It has allowed us to reach artists [in a way] that might not be as financially feasible,” she tells me. “We have had somewhere between 60-100 Black women artists from every medium in art [..] There is Ashleigh Alexandria’s photo ‘Solo,’ Stacy Mootoo’s delicate-but-strong paper sculpture ‘I Am,’ Nichole Washington’s Afropunk ‘The Choice Is Yours,’ Mimi Tempestt’s animated short film ‘Homecoming Queen’ and Kyle Malanda’s ‘Kulela’ series — all prove the dynamic power Black women artists continue to present, especially when given a platform to express what they make.”

By her telling, it’s hard to conceive of an art form not represented this year, “except neon lights — we plan to change that.”

The necessity of “TBWiG” in 2020 isn’t lost on her. In a year marked by unprecedented public protests and PoC reaching some of the highest offices in the land, it’s clear to Seneferu the goal of the exhibition is more relevant than ever: “We are living during a period where Black female achievement is even more possible.”

* The 2020 virtual showcase of “The Black Woman is God” is currently available to view for free in its entirety on its official website.