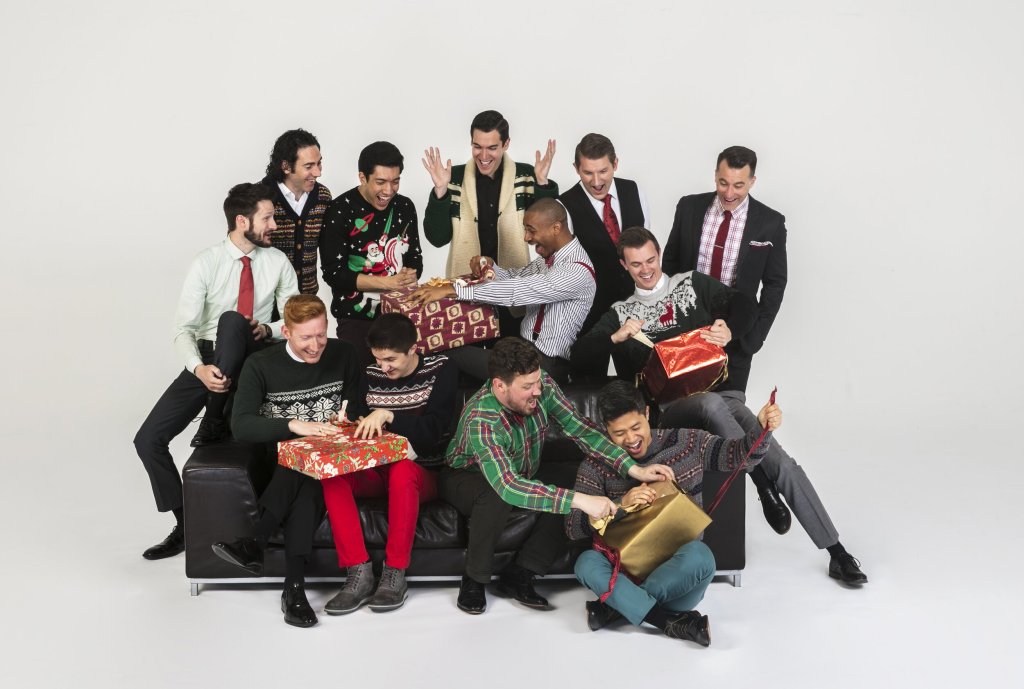 Chanticleer’s annual holiday concert will be available to stream for two weeks, up unti noon on New Year’s Day. (Courtesy of Lisa Kohler)

Music of the season: Streaming now and steadily through noon on New Year’s Day is “A Chanticleer Christmas: From Darkness to Light,” the pandemic-era version of a revered holiday tradition. The annual concert by the world-renowned a cappella men’s group, which used to see the 12 members popping up at churches and cathedrals all around the Bay Area, will begin with their traditional candle-lit procession but be confined to a single, professionally filmed event. Chanticleer, celebrated for their crystalline harmonies and purity of tone, will be singing works by Josquin des Prez and Antoine Brumel and other holiday repertoire, including the beloved “Ave Maria” by Franz Biebl. Tickets, $25-$42 at www.chanticleer.org, entitle you to watch as many times as you like over the next two weeks. Here’s a video of their rendition of “Silent Night”: https://youtu.be/368qwMhwJ5k.

A keyboard wizard: Brilliant young Russian pianist Vyacheslav Gryaznov — affectionately known as “Slava” — is renowned worldwide both for his virtuosity and his unique transcriptions. The Steinway Society in San Jose, which hosted him to high acclaim four years ago, is bringing him back for an online encore performance streaming from Friday-Monday. On his program is Ravel’s “La Valse,” works by Monteverdi and Grieg, plus his own transcriptions of pieces by Bach, Beethoven, Mahler, and Debussy. Tickets, $20 per household, are available at steinwaysociety.com or by calling 408-300-5635.

Virtual recitals: If you’ve had it up to your Tchaikovsky with “Nutcrackers,” you have a couple of other streaming dance options this weekend. On Saturday, Zaccho Dance Theatre, which specializes in site-specific airborne dance performances, is presenting the San Francisco Aerial Arts Festival — online version. The film features footage of 16 aerial dance performers doing their thing at sites around the Bay Area, from the sides of buildings and bridges to the tops of mountains to ancient forts and flowering gardens. The company will also post video interviews with some of the performers and choreographers to stream on Sunday. The films are free but donations are encouraged. Go to sfaerialartsfest.org. Meanwhile ZiRu Dance in Redwood City presents the third annual Silicon Valley Dance Festival beginning Saturday. The virtual event features a “mainstage” program featuring works by ZiRu artistic director Philein Wang, Robert Moses (of Robert Moses’ Kin) and Brenda Way and KT Nelson (of ODC/Dance), among others, plus a second program devoted to emerging choreographers. Performances will be livestreamed 7 p.m. Saturday (mainstage) and 5 p.m. Sunday (emerging choreographers) and will afterward be available on demand through Jan. 3. Ticket packages run $15-$50; www.zirudance.com.

Scrooge with puppets: The acclaimed Manual Cinema theater troupe, having made a splash in the Bay Area with its stunning adaption of Mary Shelley’s “Frankenstein” this fall, returns to the Bay Area (at least virtually) to tinker with another classic — Dickens’ “A Christmas Carol.” Using puppetry, live theater and evocative sets and props, the Chicago troupe’s take features a contemporary setting that references the pandemic but becomes unmistakably a Dickens story once the puppets take over. The world premiere production will be livestreamed at 5 p.m. Thursday (you can meet some of the puppets after this performance), 7 p.m. Friday and 1 p.m. Saturday. Access is available through Cal Performances ($15-$60, free to subscribers; calperformances.org) and Stanford Live, where it is exclusive to subscribers (live.stanford.edu).

Roots-rockin’ Christmas: That crafty Lucinda Williams has figured out a way to deliver some holiday cheer to her fans and music clubs across America — all in one fell swoop.

On Thursday, the singer-songwriter with that distinctive drawl and a knack for timeless country/rock hooks, will livestream a show titled “Have Yourself a Rockin’ Little Christmas,” which will serve up blues, jazz, country and other rootsy versions of seasonal songs, backed by a full band. The show is part of the “Lu’s Jukebox” concert series that concludes on New Year’s Eve with her covering Rolling Stones classics. Proceeds benefit music clubs, such as Berkeley’s Freight & Salvage, which are streaming the series. “Rockin’ Little Christmas” kicks off at 5 p.m.Thursday; ticket packages with varying extras run $20-$40; go to www.thefreight.org.