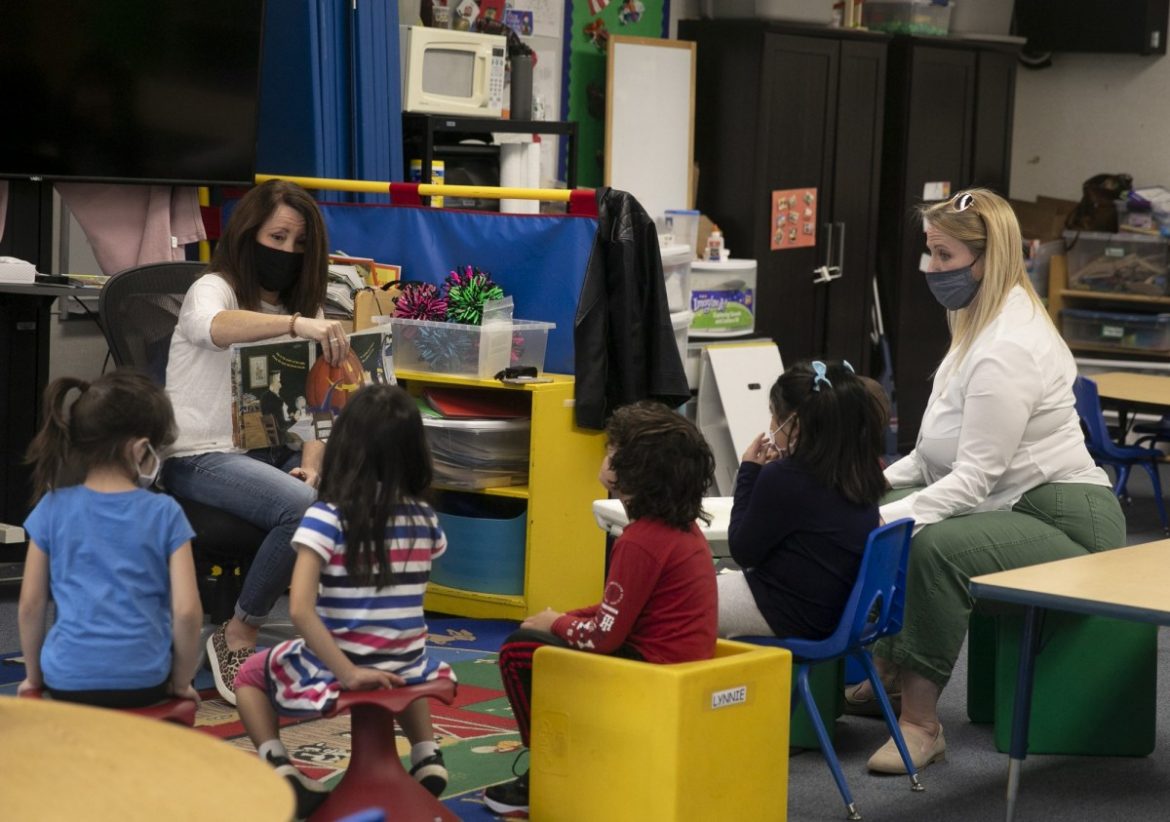 A special education pre-k class that has been permitted to reopen amid coronavirus concerns on the Lu Sutton Elementary school campus in Novato on Oct. 27, 2020.

The measure would have brought billions to California’s cash-strapped schools and community colleges, though not in time to help deal with immediate financial crises.

In the second-most expensive ballot fight this election, Prop. 15 supporters said the measure would help right what they viewed as a fundamental wrong in the state’s school funding system by increasing the share of property-tax revenues going toward schools. Opponents characterized Prop. 15 as harmful to small businesses and the state’s economy at a time when the pandemic has already strained or shuttered several local businesses.

“We’re the fifth-largest economy in the world,” said E. Toby Boyd, president of the California Teachers Association, the top benefactor for the Yes on 15 campaign, “and big corporations should be paying their fair share to invest in our students, our public schools, our families and our communities.”

The measure backed by labor unions, community organizations and several of the state’s progressive leaders challenged the state’s still-popular 1978 constitutional amendment, Prop. 13, and had been slightly trailing in the vote count since election night before the Associated Press called its defeat Tuesday by a 51.8% No to 48.2% Yes margin.

Legislative analysts projected Prop. 15 would have drawn between $6.5 billion and $11.5 billion in commercial property tax revenues, with 40% of the take going to K-12 schools and community colleges beginning in 2022-23.

So while the measure would have been a boon in the long term, any financial fruits borne out of a Prop. 15 win would not have arrived soon enough to address the immediate twin financial crises facing the state’s public schools: Tense efforts to physically reopen campuses and the state education budget’s looming cliff.

California K-12 schools and community colleges, almost a decade removed from the steep Great Recession-era cuts that resulted in more than 30,000 teacher layoffs, were slated to receive a record $84 billion in state funding this year — up from $81.6 billion — before the pandemic cratered the state’s budget forecast.

Faced with a potential 10% cut to the state’s main school finance artery, the Local Control Funding Formula, Gov. Gavin Newsom and the Legislature protected school budgets this year by deferring $11 billion in state funding for schools. That move held schools’ funding flat by delaying payments to schools into the next fiscal year – some installments coming as late as seven months – but also means the state will have to confront a potentially taller school finance cliff starting next year.

“Yes, Prop. 15 would’ve helped in the long run, but it wouldn’t have fixed this short-term problem that the Legislature’s going to face in the coming spring,” said Bruce Fuller, a professor at UC Berkeley’s Graduate School of Education.

As state education funding increased over the latter part of the decade, so too have fixed costs such as employee pension contributions and support services for growing populations of students in the state who have special needs or are English learners.

Several communities across California with the state’s permission to reopen campuses are engaged in fraught debates among school leaders, teachers, parents and employee unions over when and how to do so. Among the sticking points has been whether schools have the resources to implement and sustain safety measures, such as surveillance coronavirus testing for employees. At a recent legislative hearing, state lawmakers acknowledged schools’ dearth of testing capacity was prolonging potential campus reopenings while noting that the state had little room in its budget to assist with local efforts.

“(This) is not magical money that can be stretched forever,” Troy Flint, spokesman for the California School Boards Association, said of the CARES Act funding, adding that schools are “in a very perilous position” financially.

“Anytime there’s a new expectation or the state imposes a new requirement, it keeps pointing to that same pot of money,” Flint said.

Prop. 15 is the second education-related statewide measure to face defeat this year, in part, due to the tall shadow of the landmark measure commonly referred to as the third rail of state politics.

Voters also rejected in the March primary a $15 billion state bond for school construction that, because of the state’s sequential numbering requirements for ballot measures, shared the same name as the 1978 property-tax cut: Prop. 13. Though some political observers pointed to the measure’s confusing name as a reason for its defeat, others also noted that its supporters failed to adequately communicate to voters the bond’s importance.

Despite Prop. 15’s defeat, supporters were optimistic late election night when initial returns came in, saying that the closeness of the vote suggested an appetite from voters to invest more money in public services such as K-12 education.

At the local level, school measures across the state continued to receive broad support — another sign of voters’ support for education funding, according to advocates. About 80% of the 60 K-12 and community college bonds on local ballots, including a $7 billion bond in Los Angeles Unified, appeared headed toward approval at press time, according to results gathered by Michael Coleman, publisher of the California Local Government Finance Almanac. Nine out of 13 parcel taxes, which require two-thirds voter approval, appeared to pass, though the votes remained too close to call in two communities.

Another attempt at an education-related tax measure in the near future seems likely, though it’s too soon to predict how a future measure would be structured. Also unclear at the moment is whether education and community advocates would again mount their own effort, similar to Prop. 15, or if the governor and Legislature would get involved.

Before the state’s budget crunch, researchers affiliated with Stanford University had calculated it would take an additional $25 billion in school funding for all of the state’s 6.1 million public-school students to meet its learning standards. In recent years, some state lawmakers have wanted to go even further. The pandemic has increased those needs, according to advocates.

Newsom endorsed Prop. 15 in September, though did not campaign for the measure. The governor also said recently that he would not support legislation calling for higher income taxes.

Whatever the course, the road to more schools funding will likely require broad support among state leaders, education unions, advocacy groups as well as a unified message, said Carrie Hahnel, an independent education researcher and fellow with the Berkeley-based Opportunity Institute.

Without federal or state intervention, Hahnel wrote in a recent Policy Analysis for California Education brief, schools are likely to face a downturn like the one they experienced nearly a decade ago. Because California’s public schools are heavily reliant on state income taxes, it makes them more susceptible to volatility amid the peaks and valleys of the state’s economy, Hahnel wrote.

In 2012, at the tail end of the recession as the state neared a similar school funding cliff, then-Gov. Jerry Brown campaigned aggressively for Proposition 30, a quarter-cent sales tax that aimed to prop up school funding. The message then was clear: Vote yes or schools stood to lose $6 billion in cuts. It passed, 55.4% to 44.6%. That kind of support from the governor might be what it takes to put a future ballot measure over the top.

“I think we need to start from scratch and get everybody together and say what we are trying to do and how we can build this thing even if it means some compromises, some shared pain,” Hahnel said. “It’s very hard to hit the business community alone.”