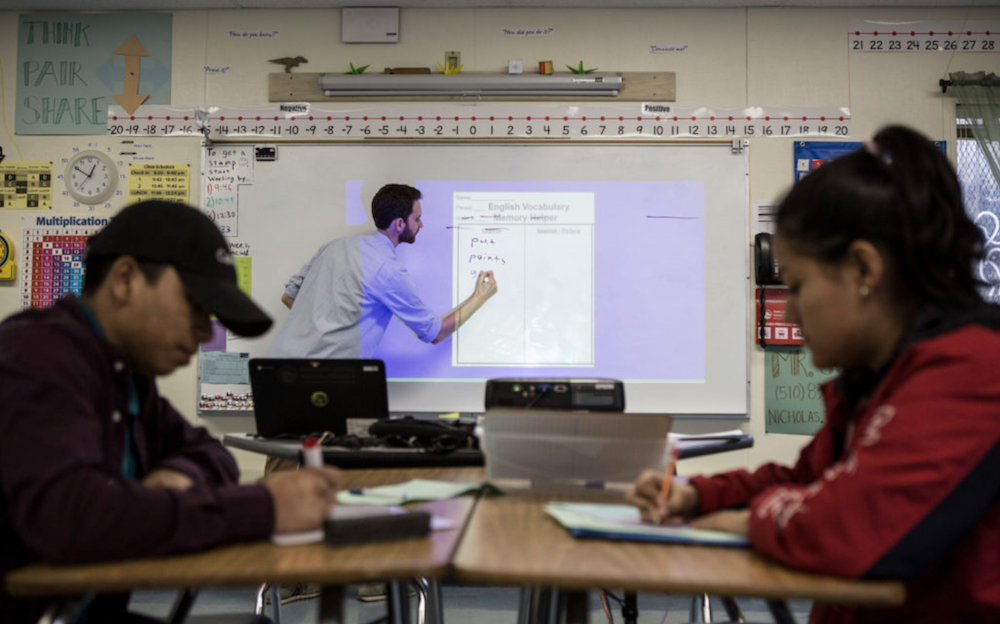 Students take notes as teacher, Nick Johnson, writes unfamiliar words on the board in his Algebra 1 math class at Rudsdale Newcomer High School in Oakland, California.

High school students planning to apply to the University of California now have a broader set of courses they can take to meet the math requirement for admission to the public university system.

As more high schools across California have developed and adopted new college-prep math courses, math education and equity advocates have urged the state’s public universities to allow these courses to count toward admission requirements.

Under the new rules adopted in October, students in 11th and 12th grade can take data science, computer science, statistics and other approved quantitative reasoning courses to satisfy the required third year or recommended fourth year of math needed to be eligible for UC.

Both the UC and California State University require three years of high school math but recommend four as part of the A-G courses that students must take to be eligible for admission. Historically, that typically includes Algebra 1, Geometry and Algebra 2, which often leads to Calculus.

But some students do not reach Algebra 2 or Calculus by their senior year, the courses aren’t offered, or they don’t want to take the courses because they don’t align with their academic pathway, creating barriers to college admission for students.

According to UC officials, the decision to accept a variety of quantitative reasoning courses for admission aims to provide more options outside of the traditional Calculus track, which isn’t required for most non-STEM pathways.

It will also expose students to other math topics that are increasingly available on college campuses and in-demand in the workforce.

“There have been ongoing efforts from high schools to design and implement an expanded range of college-prep math courses, so at its core, this is an opportunity to broaden the range of course options for students to enter UC,” said Eddie Comeaux, chairman of the UC Board of Admission and Relations with Schools, which approved the admission change.

Students must still complete three years of math, including a course in geometry or an integrated math course that covers enough geometry to be eligible for UC. Approved math and quantitative reasoning courses must also cover topics included in elementary algebra, two- and three-dimensional geometry and advanced algebra.

In recent years, courses such as Introduction to Data Science, a high school course developed by Los Angeles Unified and UCLA, have grown increasingly popular. First offered in Los Angeles Unified in the 2014-15 school year, it has since expanded to 17 California school districts plus other districts in Idaho, New Jersey and Oregon.

Phineas Banning High School in Los Angeles was among the first schools to implement the data science course, which was already accepted by UC to meet the required third or optional fourth year of math prior to the recent admissions change.

Shirley Guzman, assistant principal at Phineas Banning, saw students struggling with the traditional math course progression and wanted to introduce opportunities to engage them in quantitative reasoning. After bringing on the course about five years ago, Guzman said students began to “see math differently because they felt successful in it, even if they didn’t before or didn’t like their Algebra courses.”

Although UC already accepted that particular data science course, Guzman had trouble convincing counselors — who work with students to develop their course schedules — to recommend students take data science instead of traditional advanced math courses. The expansion of acceptable math courses will help remove that barrier, she said, and hopefully encourage more schools to adopt and create alternative math options for students.

“Counselors feel better when it’s in writing,” Guzman said. “No one will question why a kid has data science instead of Algebra 2 in their transcripts. This validates a lot of our conversations.”

Updating the list of approved courses is also critical for expanding access to college for first-generation students, she said, because many of those students rely on their counselors for information about how to apply to college and what courses they can or should take.

Nearly 90% of students at Phineas Banning are eligible for free or reduced-price lunch and about 94% are Latino, according to data from the California Department of Education, and many graduates who go on to college are the first in their family to do so, Guzman said.

“We have to step away from thinking that there’s only one way to get to college. Now we can tell students they can take statistics or computer science,” Guzman said. “Giving students choices at the high school level is very important because if we narrow the pathway, we will leave a lot of students behind.”

“I think the admissions policy that UC has articulated really opens up more possibilities to teach math in ways that are more effective and better support students in developing quantitative reasoning skills, whether they want to pursue a STEM career or not,” said Pamela Burdman, executive director of Just Equations, a nonprofit focusing on the role of mathematics in educational equity.

Comeaux, who is an associate professor of higher education at UC Riverside, sees the adoption of the Common Core math standards in 2015 as driving the appetite for differentiated math pathways. The current math standards have required a significant shift in instruction, such as emphasizing math concepts over memorizing facts and procedures and finding multiple ways to get to an answer.

“You have all of these different ideas for math within Common Core,” Comeaux said. “That appears to be the motivation for this movement because there are a number of campus stakeholders already engaged in these conversations.”

Math requirements for college admission stirred controversy last year when the California State University system proposed requiring a fourth year of math or a quantitative reasoning course for admission. Under that proposal, which is slated for a vote in 2022, students could choose from a number of different courses to satisfy the additional year requirement, including data science, computer science and applied mathematics

Advocates of the CSU proposal said it would help students come better prepared for math courses in college. But skeptics pointed out it isn’t necessary because the vast majority of students who attend CSU already take four years of math. They also argue that requiring an additional year of math or quantitative reasoning could put some students at a disadvantage if they are otherwise qualified for admission but they attend a school that doesn’t offer enough courses.

“My organization and others were concerned that CSU’s proposed policy could narrow access because students’ ability to take the fourth year was contingent on their high school circumstances,” Burdman said. “We wanted to see more evidence about the claim that it wouldn’t have a negative impact on equity.”

Both the CSU proposal and UC’s decision to revise its math course list open up a wider range of math courses students can take to be eligible for admission, and officials in both systems have said more exposure to advanced high school math will help prepare students for college-level courses. But unlike the CSU proposal, UC does not want to make it mandatory.

That’s one reason why UC has so far put off increasing the number of science courses students must take to be considered for admission from two to three, which was proposed after the state adopted the Next Generation Science Standards in 2013.

“If we increase the number of courses required, and a handful of high schools don’t have access to enough science courses, what message does that send to students?” Comeaux said. “They can apply to UC, they still have as good of a chance to get in, but when you have students already at a disadvantage, the perception might be that ‘we are not welcome.’”

Initially, Comeaux worried that the math courses update could put students at schools that don’t have alternative quantitative reasoning courses at a disadvantage for admission. But those concerns have largely subsided after learning that schools can create their own quantitative reasoning courses, and that it won’t create any new restrictions for prospective students.

“Just like any other discipline or content area,” he said, “the opportunity to expose students to a wide range of options in math pushes their critical thinking skills and could expose them to another way of thinking that might not be presented to them.”