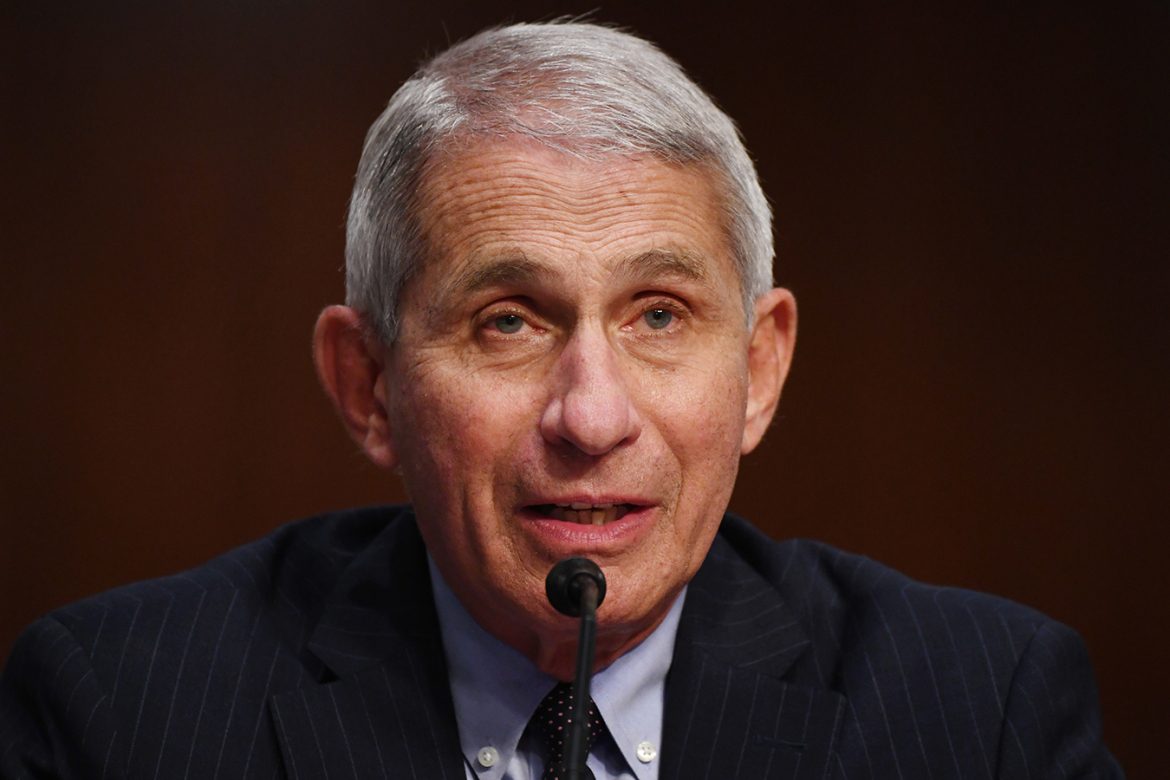 Dr. Anthony Fauci, director of the National Institute for Allergy and Infectious Diseases, testifies at a hearing of the Senate Health, Education, Labor and Pensions Committee on June 30, 2020 in Washington, DC.

As a health journalist, a physician and a former foreign correspondent who lived through SARS in Beijing, I often get questions from friends, colleagues and people I don’t even know about how to live during the pandemic. Do I think it’s safe to plan a real wedding next June? Would I send my kids to school, with appropriate precautions? When will I trust a vaccine?

To the last question, I always answer: When I see Anthony Fauci take one.

Like many Americans, I take my signals from Dr. Fauci, the country’s top infectious disease expert and a member of the White House task force on the coronavirus. When he told The Washington Post that he was not wiping down packages but just letting them sit for a couple of days, I started doing the same. In October, he remarked that he was bringing shopping bags into the house. He merely washes his hands after unpacking them. (Me too!)

Now we are in a dangerous political transition, with cases spiking in much of the country and Fauci and the original task force largely sidelined. President-elect Joe Biden has appointed his own, but it can’t do much until the General Services Administration signals that it accepts the results of the election. And Fauci told me he has not yet spoken with the Biden task force. President Donald Trump has resisted the norms on government transition, in which the old and new teams brief each other and coordinate.

The past tumultuous months have been filled with information gaps (we’re still learning about the novel coronavirus), misinformation (often from the president) and a host of “experts” — public health folks, mathematical modelers, cardiologists and emergency room doctors like me — offering opinions on TV. But all this time, the person I’ve most wanted to hear from is Fauci. He’s a straight shooter, with no apparent conflicts of interest — political or financial — or, at 79, career ambition. He seemingly has no interests other than yours and mine.

So I asked him how Americans might expect to live in the next six to nine months. How should we behave? And what should the next administration do? Some answers have been edited for clarity and brevity.

Q: Are there two or three things you think a Biden administration should do on Day One?

There were some states in some regions of the country that somehow didn’t seem to have learned the lessons that could have been learned or should have been learned when New York City and other big cities got hit. And that is to do some fundamental public health measures. I want to really be explicit about this, because whenever I talk about simple things like uniform wearing of masks, keeping physical distance, avoiding crowds (particularly indoors), doing things outdoors to the extent possible with the weather, and washing hands frequently, that doesn’t mean shutting down the country. You can still have a considerable amount of leeway for business, for economic recovery, if you just do those simple things. But what we’re seeing, unfortunately, is a very disparate response to that. And that inevitably leads to the kind of surges that we see now.

Q: Do you think we need a national policy like a national mask mandate? The current administration has left a lot of COVID-19 management to the states.

I think that there should be universal wearing of masks. If we can accomplish that with local mayors, governors, local authorities, fine. If not, we should seriously consider national. The only reason that I shy away from making a strong recommendation in that regard is that things that come from the national level down generally engender a bit of pushback from an already reluctant populace that doesn’t like to be told what to do. So you might wind up having the countereffect of people pushing back even more.

Q: What would a national mask mandate look like to you? It means different things in different states. Many states require face coverings, but not specifically masks. Many 20-somethings use only a bandanna.

I think it is unlikely that there’s a substantial difference. I mean, the typical type of a mask is the surgical mask. It’s not an N95 mask. One that has thick cloth, you know, can be equally as effective. We believe there may be some small differences between them, but the main purpose is that you prevent yourself from infecting others. Recent studies have shown that [wearing a mask] also has the good effect of partially protecting you. So it goes both ways.

Q: Many places that have mask mandates have had trouble enforcing them.

That’s really one of the reasons there’s a reticence on the part of many people, including myself [to support a national mandate]. If you have a mandate, you have to enforce it. And, hopefully, we can convince people when they see what is going on in the country. But I have to tell you, Elisabeth, I was stunned by the fact that in certain areas of the country, even though the devastation of the outbreak is clear, some people are still saying it’s fake news. That is a very difficult thing to get over: why people still insist that something that’s staring you right in the face is not real.

Q: People often think of shutdowns as binary. You’re open or you’re shut. Often, when you answer questions about how to live, you start with. ‘Well, I’m in a high-risk group. …” So I would love to hear Dr. Fauci’s hierarchy of “Safe and important to keep open with precautions” and “Things that aren’t safe under any circumstances.”

The reason I answer with some degree of trepidation is because the people who are the proprietors of these businesses start getting very, very upset with me. There are some essential businesses that you want to keep open. You want to keep grocery stores open, supermarkets open, things that people need for their subsistence. You might, if it’s done properly, keep open some nonessential businesses, you know, things like clothing stores, department stores.

Q: We’re heading into the winter months. You could social distance in a restaurant or in an indoor gathering. But would you feel OK being in there without a mask?

If we’re in the hot zone the way we are now, where there’s so many infections around, I would feel quite uncomfortable even being in a restaurant. And particularly if it was at full capacity.

Q: I see you’ve been getting your hair cut. What do you think about hair salons?

Q: Transportation? Trains? Planes? Metro? Where are we at the moment?

It depends on your individual circumstances. If you are someone who is in the highest risk category, as best as possible, don’t travel anywhere. Or if you go someplace, you have a car, you’re in your car by yourself, not getting on a crowded subway, not getting on a crowded bus or even flying in an airplane. If you’re a 25-year-old who has no underlying conditions, that’s much different.

Bars are really problematic. I have to tell you, if you look at some of the outbreaks that we’ve seen, it’s when people go into bars, crowded bars. You know, I used to go to a bar. I used to like to sit at a bar and grab a hamburger and a beer. But when you’re at a bar, people are leaning over your shoulder to get a drink, people next to each other like this. It’s kind of fun because it’s social, but it’s not fun when this virus is in the air. So I would think that if there’s anything you want to clamp down on, for the time being, it’s bars.

Q: Some airlines and some states are telling people you have to get a coronavirus test before you get on the plane or visit another state. Does that make sense medically?

If you’re negative when you get on the plane — except in the rare circumstance that you’re in that little incubation window before you turn positive — that’s a good thing.

Q: If you had a national plan for testing, what would it be?

Surveillance testing. Literally flooding the system with tests. Getting a home test that you could do yourself, that’s highly sensitive and highly specific. And you know why that would be terrific? Because if you decided that you wanted to have a small gathering with your mother-in-law and father-in-law and a couple of children, and you had a test right there. It isn’t 100%. Don’t let the perfect be the enemy of the good. But the risk that you have — if everyone is tested before you get together to sit down for dinner — dramatically decreases. It might not ever be zero but, you know, we don’t live in a completely risk-free society.

Q: There are a number of vaccine candidates that are promising. But there’s also a lot of skepticism because we’ve seen the FDA come under both commercial and, increasingly, political pressure. When will we know it’s OK to take a vaccine? And which?

It’s pretty easy when you have vaccines that are 95% effective. Can’t get much better than that. I think what people need to appreciate — and that’s why I have said it like maybe 100 times in the last week or two — is the process by which a decision is made. The company looks at the data. I look at the data. Then the company puts the data to the FDA. The FDA will make the decision to do an emergency use authorization or a license application approval. And they have career scientists who are really independent. They’re not beholden to anybody. Then there’s another independent group, the Vaccines and Related Biological Products Advisory Committee. The FDA commissioner has vowed publicly that he will go according to the opinion of the career scientists and the advisory board.

Q: You feel the career scientists will have the final say?

Q: And will the decisions that are being made in this transition period — like the vaccine distribution plan — in any way limit the options of a new administration?

No, I don’t think so. I think a new administration will have the choice of doing what they feel. But I can tell you what’s going to happen, regardless of the transition or not, is that we have people totally committed to doing it right that are going to be involved in this. So I have confidence in that.

Q: When do you think we’ll all be able to throw our masks away?

I think that we’re going to have some degree of public health measures together with the vaccine for a considerable period of time. But we’ll start approaching normal — if the overwhelming majority of people take the vaccine — as we get into the third or fourth quarter [of 2021].

Q: Thank you so much. And have a nice Thanksgiving.

Take care, and you too.

[Editor’s note: Dr. Fauci has said his family is forgoing the usual family Thanksgiving gathering this year because his adult children would have to fly home and that travel would expose him to risk.]

You can listen to the full interview on KHN’s “What the Health?” podcast.