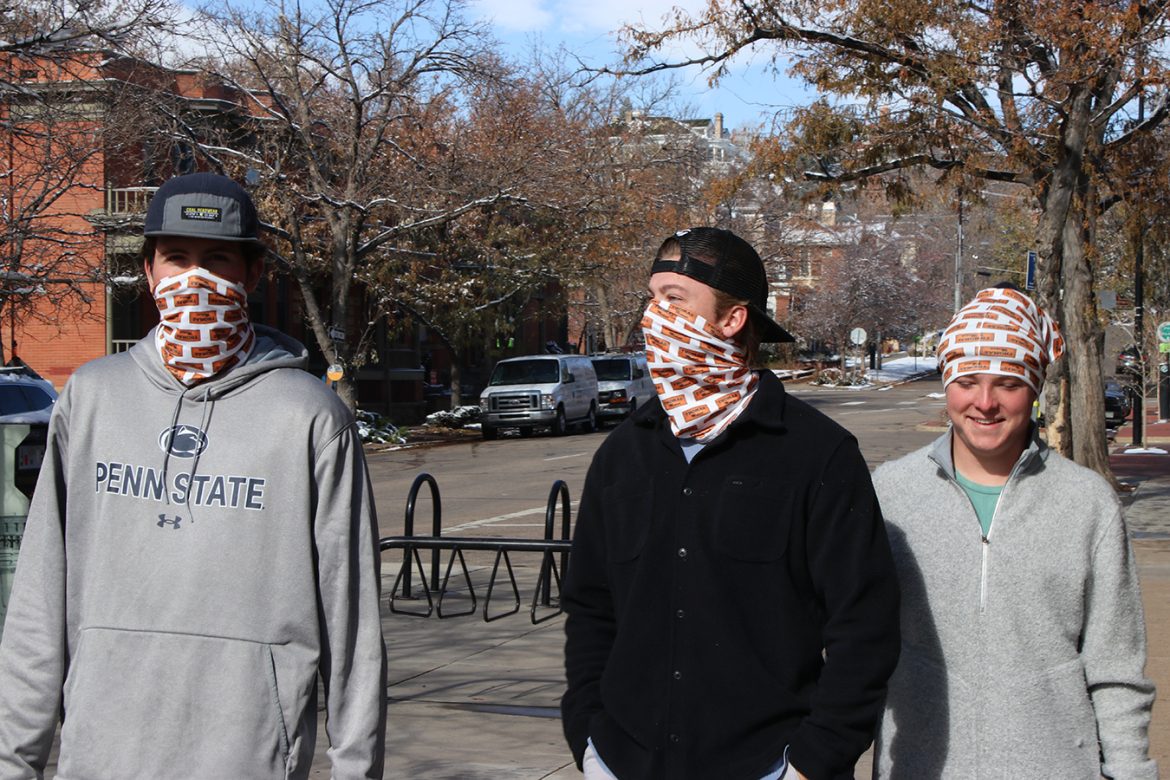 College students Colin Berg (left), Connor Dreher and Brady Bowman stroll through downtown Boulder, Colorado, in mid-November wearing matching neck gaiters. Some research suggests the thin material used in gaiters does not block as much of the coronavirus as cloth face masks do, even when worn correctly, doubled over and covering the nose and mouth.

BOULDER, Colo. — Brady Bowman, a 19-year-old student at the University of Colorado-Boulder, and two friends strolled down 11th Street, all sporting matching neck gaiters branded with the Thomas’ English Muffins logo. He had received an entire box of the promotional gaiters.

He thinks they are just more comfortable to wear than a face mask. “Especially a day like today, where it’s cold out,” he said, with the top of his gaiter pulled down below his chin.

With states such as Colorado requiring face coverings indoors to prevent the spread of COVID-19, gaiters and bandannas have become popular accessories, particularly among college students and other young adults. Less restrictive than masks, they can easily be pulled up or down as needed — and don’t convey that just-out-of-the-hospital vibe.

But tests show those hipper face coverings are not as effective as surgical or cloth face masks. Bandannas, like plastic face shields, allow the virus to escape out the bottom in aerosolized particles that can hang in the air for hours. And gaiters are often made of such thin material that they don’t trap as much virus as cloth masks.

As new COVID cases, hospitalizations and deaths surge upward heading into winter, many public health experts wonder whether it’s time to move beyond the anything-goes approach toward more standardization and higher-quality masks. President-elect Joe Biden reportedly is mulling a national face-covering mandate of some sort, which could not only increase mask-wearing but better define for Americans what sort of face covering would be most protective.

“Unlike seat belts, condoms or other prevention strategies, we have not yet standardized what we are recommending for the public,” said Dr. Monica Gandhi, an infectious disease specialist at the University of California-San Francisco. “And that has been profoundly confusing for the American public, to have all these masks on the market.”

Masks have been shown to reduce the spread of respiratory droplets that contain the coronavirus. And the Centers for Disease Control and Prevention now says that masks not only help prevent people from infecting others but help protect the wearers from infection as well.

According to a recent analysis by the Institute for Health Metrics and Evaluation, implementing universal mask-wearing in late September would have saved nearly 130,000 American lives by the end of February.

Even so, many Americans still aren’t wearing masks. And in some states, they haven’t been required to do so.

At least 37 states and the District of Columbia have mandated face coverings but show wide variation in defining what qualifies. States such as Maryland and Rhode Island include bandannas or neck gaiters in their definitions, while South Carolina and Michigan do not, according to a KHN review of the orders. Some spell out the circumstances in which coverings must be worn or establish enforcement policies.

But according to Lawrence Gostin, a Georgetown University law professor, many states are not holding residents to those rules. Some state or local officials are choosing not to enforce them.

“We have a patchwork of inconsistent rules and laws around the country,” Gostin said. “And when we are dealing with a nationwide pandemic, a patchwork just won’t get the job done.”

Cloth mask manufacturing was nearly nonexistent in the U.S. before the pandemic, so public health officials opted early in the year to stress the importance of wearing any face covering rather than trying to focus on one standard. As a result, Americans are wearing a hodgepodge of coverings, from home-sewn to commercial versions, with various levels of protection.

And what is worn matters. Dr. Iahn Gonsenhauser, an infectious disease specialist at the Ohio State University Wexner Medical Center, said face coverings generally fall into three categories of effectiveness. N95 masks (not those with valves), surgical masks and well-made cloth masks (constructed of tightly woven material, folded over two or three times, and properly covering the mouth and nose) are in the highly effective category.

Bandannas, neck gaiters and face shields lie at the other end of the spectrum, and most everything else falls in the middle.

“Bandannas are typically a thinner material, so if they’re not doubled or tripled up, that can allow respiratory droplets, in particular, to move through the masks,” he said. “But the fact that they’re open along the bottom of the mouth and neck, if they’re not tucked into a shirt or something like that, also allows for a lot of that exhalation droplet to escape around the mask and become airborne.”

A plastic face shield can block larger droplets but won’t stop aerosolized particles from flowing beyond its edges.

The evidence around neck gaiters has been mixed, in part because so many materials and designs are used. But recent testing suggests even the thin material commonly used to make gaiters is nearly as effective as a cloth mask if doubled over.

Researchers at the National Institute for Occupational Safety and Health have found most of the commercially produced cloth masks block 40% to 60% of droplets, approaching the effectiveness of surgical masks.

“You can’t possibly test everything, but certainly one take-home message is that anything is better than nothing,” said William Lindsley, a NIOSH biomedical engineer. “We haven’t tested anything that has not worked.”

But Gandhi believes it’s time to raise the standards for masks, ramp up the production of disposable surgical masks and encourage, if not order, Americans to wear them. Early in the pandemic, the Trump administration reportedly considered sending masks to every American but ultimately decided against it.

Taiwan, on the other hand, invested in manufacturing and distributing surgical masks, and it has one of the lowest COVID death counts in the world: fewer than 10 deaths in a country of 24 million people.

“It makes more sense to standardize masks, to mass-produce surgical masks, which are not very expensive,” Gandhi said. “We’re spending a lot more on everything else.”

She said surgical masks might even reduce the severity of COVID-19. Gandhi and several colleagues recently wrote in a medical journal article that evidence suggests the less virus a person is exposed to, the less sick they become.

That’s been backed up in tests with lab animals exposed to the coronavirus and with humans exposed to other, less dangerous respiratory viruses.

Other evidence also supports that theory. While the CDC estimates about 40% of COVID cases are asymptomatic, outbreaks in food processing plants where workers were handed surgical or N95 masks as they entered showed a much higher proportion of infected workers never developed symptoms. That could explain why many Asian countries, where mask-wearing has been a cultural norm for decades, have been able to reopen their economies without seeing death rates as high as in the United States.

If she’s right, a national mandate calling for surgical masks could both reduce transmission and prevent serious disease.

“We can’t wait,” Gandhi said. “We’ve had enough deaths from this infection. Our case fatality rates in a country of this degree of development are just tragic.”

It remains to be seen whether Americans will be more willing to wear dowdier, less comfortable but more effective masks to protect themselves and others. When Bowman, the Boulder college student, was asked if he was worried that his gaiter might not block as much of the virus as a face mask, he seemed unconcerned.

“As long as the other person is wearing a mask,” he said.