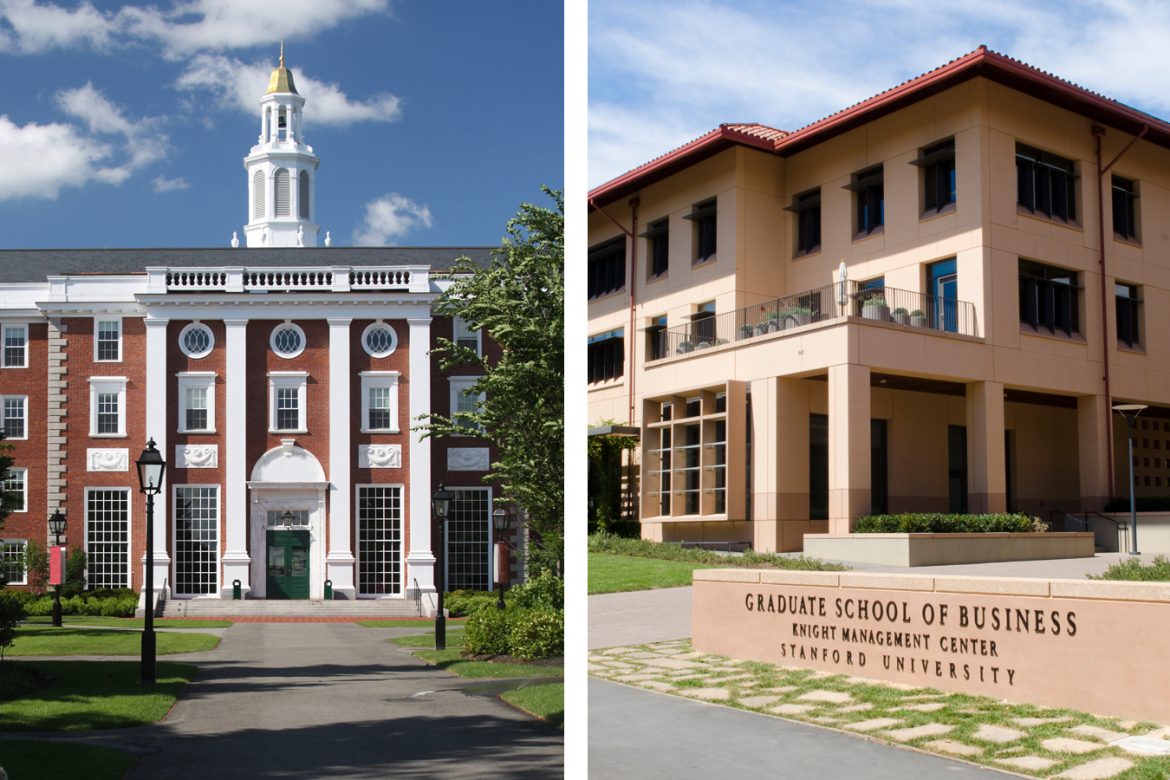 While the Harvard Business School gently chided returnees to be on their best behavior, Stanford deployed green-vested enforcers and campus police who sometimes threatened students if they violated the rules.

At the Stanford Graduate School of Business in Northern California, the stories got weird almost immediately upon students’ return for the fall semester. Some said they were being followed around campus by people wearing green vests telling them where they could and could not be, go, stop, chat or conduct even a socially distanced gathering. Others said they were threatened with the loss of their campus housing if they didn’t follow the rules.

Across the country in Boston, students at the Harvard Business School gathered for the new semester after being gently advised by the school’s top administrators, via email, that they were part of “a delicate experiment.” The students were given the ground rules for the term, then received updates every few days about how things were going. And that, basically, was that.

In the time of COVID-19, it’s fair to say that no two institutions have come to quite the same conclusions about how to proceed safely. But as Harvard’s and Stanford’s elite MBA-granting programs have proved, those paths can diverge radically, even as they may eventually lead toward the same place.

For months, college and university administrators nationwide have huddled with their own medical experts and with local and county health authorities, trying to determine how best to operate in the midst of the novel coronavirus. Could classes be offered in person? Would students be allowed to live on campus — and, if so, how many? Could they hang out together?

“The complexity of the task and the enormity of the task really can’t be overstated,” said Dr. Sarah Van Orman, head of student health services at the University of Southern California and a past president of the American College Health Association. “Our first concern is making sure our campuses are safe and that we can maintain the health of our students, and each institution goes through that analysis to determine what it can deliver.”

With a campus spread over more than 8,000 acres on the San Francisco Peninsula, Stanford might have seemed like a great candidate to host large numbers of students in the fall. But after sounding hopeful tones earlier in the summer, university officials reversed course as the pandemic worsened, discussing several possibilities before finally deciding to limit on-campus residential status to graduate students and certain undergrads with special circumstances.

The Graduate School of Business sits in the middle of that vast and now mostly deserted campus, so the thought was that Stanford’s MBA hopefuls would have all the physical distance they needed to stay safe. Almost from the students’ arrival in late August, though, Stanford’s approach was wracked by missteps, policy reversals and general confusion over what the COVID rules were and how they were to be applied.

Stanford’s business grad students were asked to sign a campus compact that specified strict safety measures for residents. Students at Harvard Business School signed a similar agreement. In both cases, state and local regulations weighed heavily, especially in limiting the size of gatherings. But Harvard’s compact emerged fully formed and relied largely on the trustworthiness of its students. The process at Stanford was unexpectedly torturous, with serial adjustments and enforcers who sometimes went above and beyond the stated restrictions.

Graduate students there, mobilized by their frustration over not being consulted when the policy was conceived, urged colleagues not to sign the compact even though they wouldn’t be allowed to enroll in classes, receive pay for teaching or live in campus housing until they did. Among their objections: Stanford’s original policy had no clear appeals process, and it did not guarantee amnesty from COVID violation punishments to those who reported a sexual assault “at a party/gathering of multiple individuals” if the gathering broke COVID protocols.

Under heavy pressure, university administrators ultimately altered course, solicited input from the grad student population and produced a revised compact addressing the students’ concerns in early September, including the amnesty they sought for reporting sexual assault. But the Stanford business students were already unsettled by the manners of enforcement, including the specter of vest-wearing staffers roaming campus.

According to the Stanford Daily, nine graduate students were approached in late August by armed campus police officers who said they’d received a call about the group’s outdoor picnic and who — according to the students — threatened eviction from campus housing as an ultimate penalty for flouting safety rules. “For international students, [losing] housing is really threatening,” one of the students told the newspaper.

The people in the vests were Event Services staff working as “Safety Ambassadors,” Stanford spokesperson E.J. Miranda wrote in an email. The staffers were not on campus to enforce the compact, but rather were “emphasizing educational and restorative interventions,” he said. Still, when the university announced the division of its campus into five zones in September, it told students in a health alert email that the program “will be enforced by civilian Stanford representatives” — the safety ambassadors.

The Harvard Business School’s approach was certainly different in style. In July, an email from top administrators reaffirmed the school’s commitment to students living on campus and taking business classes in person in a hybrid learning model. As for COVID protocols, the officials adopted “a parental tone,” as the graduate business education site Poets & Quants put it. “All eyes are on us,” the administrators wrote in an August email.

But the guts of the school’s instructions were similar to those at Stanford. Both Harvard and Stanford severely restricted who could be on campus at any given time, limiting access to students, staff members and preapproved visitors. Both required that anyone living on campus report their health daily through an online portal, checking for any symptoms that could be caused by COVID-19. Both required face coverings when outside on campus — even, a Harvard missive said, in situations “when physical distancing from others can be maintained.”

So far, both Harvard and Stanford have posted low positive test rates overall, and the business schools are part of those reporting totals, with no significant outbreaks reported. Despite their distinct delivery methods, the schools ultimately relied on science to guide their COVID-related decisions.

“I feel like we’ve been treated as adults who know how to stay safe,” said a Harvard second-year MBA candidate who requested anonymity. “It’s worked — at least here.”

But as the experiences at the two campuses show, policies are being written and enforced on the fly, in the midst of a pandemic that has brought challenge after challenge. While the gentler approach at Harvard Business School largely worked, it did so within a larger framework of the health regulations put forth by local and county officials. As skyrocketing COVID-19 rates across the nation suggest, merely writing recommendations does little to slow the spread of disease.

Universities have struggled to strike a balance between the desire to deliver a meaningful college experience and the discipline needed to keep the campus caseload low in hopes of further reopening in 2021. In Stanford’s case, that struggle led to overreach and grad-student blowback that Harvard was able to avoid.

The fall term has seen colleges across the country cycling through a series of fits and stops. Some schools welcomed students for in-person classes but quickly reverted to distance learning only. And large campuses, with little ability to maintain the kind of control of a grad school, have been hit tremendously hard. Major outbreaks have been recorded at Clemson, Arizona State, Wisconsin, Penn State, Texas Tech — locations all over the map that opened their doors with more students and less stringent guidelines.

In May, as campuses mostly shut down to consider their future plans, USC’s Van Orman expressed hope that universities’ past experiences with international students and global outbreaks, such as SARS, would put them in a position to better plan for COVID-19. “In many ways, we’re one of the best-prepared sectors for this test,” she said.