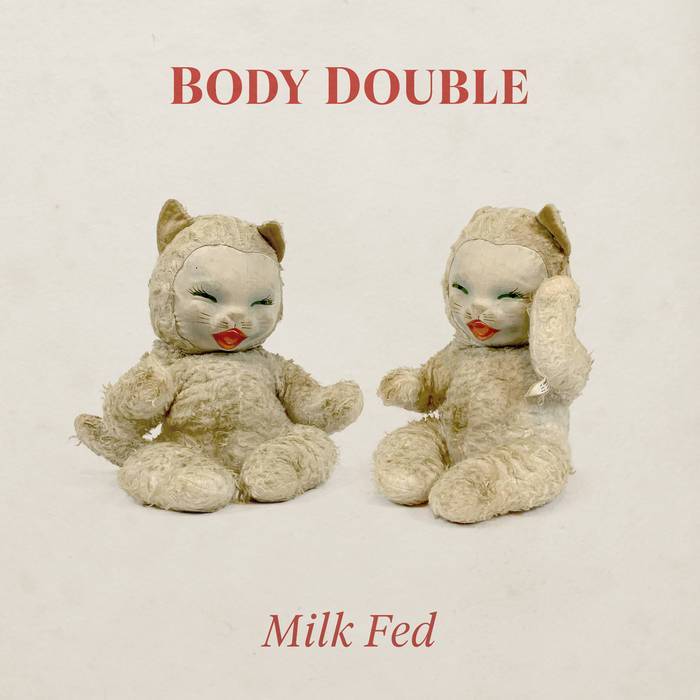 Two tarnished cat dolls sit opposite one another and exchange silent squeals. Their fur is matted and mottled with age, yet their crimson lips appear freshly lacquered. The cat on the right inexplicably raises an arm, exposing a yellowed tag with loose threading.

As seemingly promised by the Oakland post-punk band’s moniker, Body Double has produced uncanny doppelgangers, slumped in frozen feline glee on the cover of their debut album, “Milk Fed.” Note: The dolls are doubled, but not quite mirrored. It’s as if the asymmetrical pair serves to introduce a “Milk Fed” motif: The splitting of selves, at once complementary and contradictory. Don’t expect a digestible delivery; “Milk Fed” is a bonafide hall of mirrors.

Firstly, the title is meant to be more curdled cream than cute. Lyricist and founder of Body Double, Candace Lazarou, considers “milk fed” to be an insult. “I don’t know if other people use it as an insult, but the phrase icks me out,” Lazarou says, cringing. “I told my guitar player that my mom didn’t breastfeed me and he said, ‘That explains everything.’” It’s a denunciation of those who suckle the silver spoon, content in their passive dependence. And certainly Lazarou aims for self-sufficiency. Originally, Lazarou intended the album to be a solitary endeavor, written, recorded, and released by herself alone.

“I started writing Body Double songs way before shelter-in-place with the intention of writing and recording the entire album myself,” she says. “But a year into it, I had to drag an engineer in (Jason Kick), and then a year after that, I had to drag in a whole band (Noah Adams on bass, Chase Kamp on drums, Jascha Ephraim on guitar, and Mel Weikart on keyboard). My desire to pull a party trick gave way to my desire to release the record before I died — plus I got to write and play most of it anyway.”

Before Lazarou called in backup, however, she submitted herself to a lengthy period of rumination, one that involved “hours and hours of staring at walls.” In the stillness, she created a list of elements drawn from her favorite songs, which she then mapped in an elaborate thought collage. The themes that emerged spoke to universal concerns: “Love and hate, sexy stuff, petty bullshit …” Not to say that her music is the usual pop drivel. Lazarou has conjured something entirely her own.

“Milk Fed” is an artful assemblage of lyrical innovation, filtered through Lazarou’s sonorous vocals and sonically bolstered by Adams’ bassline and Kamp on drums. The sound is as manifold as her lyrics, in that it defies immediate definition. “I wanted the album to make me feel grand like glam does, juiced like punk does and uncomfortable like noisier stuff does,” Lazarou explains. “If everything is beautiful and melodious, then nothing is beautiful and melodious.”

In sidestepping the limitations of genre, Lazarou creatively wanders at will. Alongside Adams, her occasional co-writer, Lazarou lyrically explores varied versions of selfhood, and the illusion of fixed identity. In Body Double videos, darker urges are embodied by visions of alternative selves, obscured by rubber masks or mustard-yellow face paint.

At turns, these selves produce contradictions. In “Ready to Die,” Lazarou’s lyrics tease out lines that don’t immediately play nice with one another. “I was born in my lover’s arms,” she drawls, calling forth a picture of romantic intimacy, immediately dashed by the following line: “I was born way too warm.” These lines are then followed by the chorus, uniting opposite ends of the mortal coil in one wicked knot: “I was born ready to die.”

In “The Floating Hand,” Lazarou arms these selves with teeth.

“You know my shape is always shifting, right? / Which of these mouths will bite? What’s the joke?”

Her lyrics echo a sentiment from “40 Versions,” a track off of Wire’s “154” album in which vocalist Colin Newman claims to possess 40 versions of himself, “all dying to get the part.” Lazarou cites this album as a primary creative influence, along with Brian Eno’s “Taking Tiger Mountain,” David Bowie’s “Lodger,” Tones on Tail, Lou Reed’s “Street Hassle,” Ministry, a VHS copy of Adrian Belew’s “Electronic Guitar,” German photographer and gay icon Peter Berlin, giant glitzy cathedrals, short story writer Donald Barthelme, and all of her friends.

“I identify as a thief, but I think I steal so much that it becomes more representative of the way my brain filters information than the information itself,” Lazarou says.

“I’m so glad I finally learned how to play nice with others.”