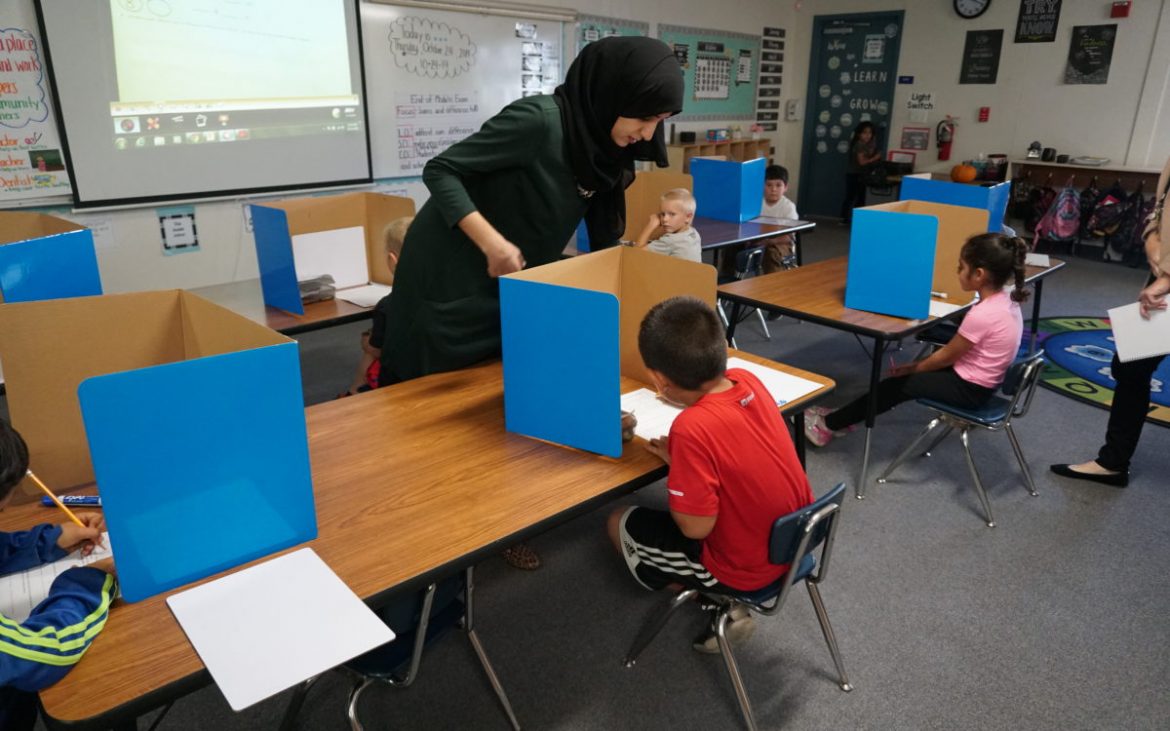 A teacher checks in on her 1st grade students during a math test at Robbins Elementary.

Parents, teachers and school administrators who want to know how students are doing academically during the pandemic will have another report card to turn to this year.

As school districts continue to grapple with distance learning and campus reopenings, the California State Board of Education on Thursday votedunanimously to adopt a modified and shortened version of the Smarter Balanced exams students in grades 3-8 and 11 are required to take in math and English language arts.

The changes would reduce the computer-adaptive questions by about half and only affects the 2020-21 school year. The California Science Test will not be affected by the proposal because it is already shorter than the math and English language arts exams, officials said.

“We had a year without data… and this puts us on the path to get more information as a way to check on the system,” Mao Vang, director for the Assessment Development and Administration Division at the California Department of Education, said on Thursday.

Last spring, after school districts closed their buildings and pivoted to distance learning during the coronavirus pandemic, the U.S. Department of Education waived federal requirements for statewide standardized testing. In September, federal education officials said that such a waiver will likely not be available this year.

The majority of California students are still learning in an online setting as coronavirus case counts continue to present a threat to public safety. However, some school districts have started bringing students back on campus. Many students are also still struggling with the lack of internet needed to log on to online classes, limited time with teachers and trauma stemming from the pandemic.

Then there’s the question about whether waivers or other options could become available in the spring if a new secretary of education is brought on following the election. “There could be a change in administration and the framework around spring testing will all become clearer in the next few days and weeks than it is now,” said state board President Linda Darling-Hammond

With so many variables this school year, it will be hard for schools to predict their situation during the upcoming testing window from January to July 2021. State education officials hope that reducing the number of test items will make strategies, such as staggering in-person instruction or taking tests online, more manageable.

“We know we have students with varying degrees of bandwidth, and we know we must continue to provide flexibility and innovative options to support teachers, students and families in an ever-shifting landscape,” Rachael Maves, deputy superintendent of instruction and measurement for the California Department of Education, said during the Board meeting on Thursday.

The tests are aligned to the Common Core academic standards that California adopted in 2010. Typically, the tests take about seven to eight hours in total for students to complete, but this year it should take closer to three to four hours, Maves said.

But many teachers and administrators have expressed concern over requiring standardized assessments and question the reliability of the test outcomes given the uncertain and unprecedented circumstances students and teachers are facing this school year.

“To truly meet California’s diverse needs the state must pursue a waiver” from standardized testing in the spring of 2021, California Teachers Association President E. Toby Boyd wrote in a letter to the California State Board of Education this week. “Otherwise, we risk perpetuating the vast inequities in our state.”

Unlike a handful of other states, California has not yet required districts to measure learning loss during the pandemic and intervene with students who need extra support in any uniform way. Some education officials and experts have applauded the state’s efforts to reinstate the tests in a short form to give parents, state and school officials a snapshot of how California students are doing in their academics this year.

Darling-Hammond also emphasized that schools and teachers should be completing a variety of assessments to give students and parents feedback beyond the Smarter Balanced tests because those scores aren’t available until months later. “Everyone should have more data about their child from other assessments,” she said.

During a public comment portion of the meeting, some callers expressed concern over how the results will be reported. But officials said it’s too early to say what results will be available for parents and how the data will work with the existing California Dashboard, which shows test scores, college readiness and other academic indicators for all California school districts.

“It is unclear what student data results will be available until an analysis of data is complete,” Vang said. “We can’t make a definitive statement about how the data will be used on the dashboard.”