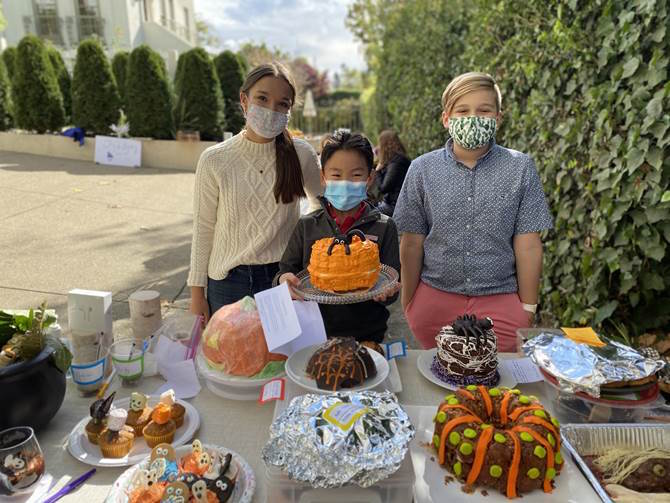 On a bright and chilly November afternoon, car after car pulled up to deliver sweet treats through a backyard gate in central Piedmont. Behind the gate, a table held a delectable array of cakes, cookies, tarts, and more – all with a Halloween theme. The collection of delicious dishes were all made by local children participating in the inaugural Top Chef Junior Piedmont competition, a student-led fundraiser for the Piedmont Education Foundation’s Giving Campaign.

The Giving Campaign is a family affair for Stevanovic. “Part of why I did this is because my aunt (Teebie Saunders) is the head of the Giving Campaign,” he says. “I thought that this would be a way for people to raise money for the schools while having fun doing it.” Co-founder Preston Kwei had a similar motivation. “My parents have always supported the Giving Campaign, so I thought I should help in my own way too,” he added. The Kwei family hosted the socially-distanced judging portion of the competition in their backyard.

Pulling off a cooking competition amid a global pandemic wasn’t easy. “The most challenging part was putting it together in a COVID world,” said student judge Grace Rego, who was also involved in event planning. “We made sure we were keeping safe distances and that the contestants were wearing masks when they dropped off their food.”

On the morning of the event, the children competing met virtually via Zoom to review the rules then began mixing, cooking, and baking in their own kitchens. At 12:30 PM, they dropped their creations off for the socially-distanced judging. A total of 23 local students, ranging from 3rd to 8th grade, participated.

Student judge Esme Krumins said the judging panel enjoyed their job. However, making it through all the entries turned out to be an arduous task. “I really liked tasting all the desserts! All of them were great,” she says. “At the end, we started to get really full – we had 23 things to taste! I had to take very small bites.”

The baking and cooking talent on display during the competition was impressive. Eight-year-old Jane Weisner (3rd grade) made pumpkin patch cake pops, painstakingly forming them with chopsticks. “I really like baking,” she said when dropping off her creation for the judges to sample. “The most fun was making the frosting!”

The grand prize winner was a chocolate cake baked by Elizabeth Payne (3rd grade), with intricate fondant decorations. Judge and professional chef Omri Aflalo was particularly impressed by the fondant bats attached to wires that appeared to “float” above the cake.

Honorable mentions went to Lucy Dorsey (5th grade), who made pumpkin-spice doughnuts encased in a chocolate shell, and Annabelle Allessio (4th grade), who made a meatloaf zombie head emerging from a pool of tomato sauce “blood” with claws of pizza crust.

The event raised $1,725 for the Giving Campaign (the largest annual fundraiser for Piedmont’s public schools) and created a day of socially-distanced fun for young bakers and chefs across Piedmont. Founders Luka Stevanovic and Preston Kwei are very happy with the results of all their hard work. “We are so proud of our amazing turnout, and can’t wait to do another round!” said Stevanovic.

Student judge Asher Dolid hopes to see the Piedmont Top Chef Junior competition become an annual event for the Giving Campaign. “I want people to know that this event is helping the Piedmont schools,” he says. “It’s supporting other people in a way that builds the community.”