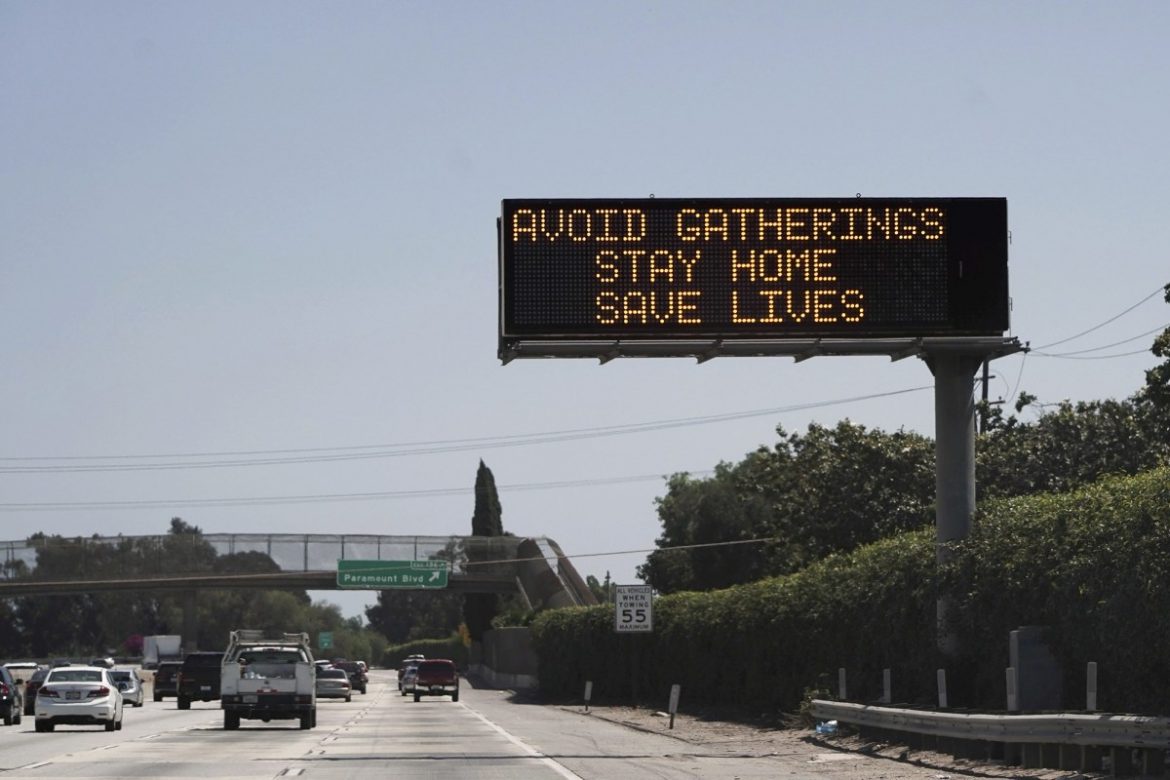 Photo by Kirby Lee via AP

A message board on Interstate 5 South with the words "Avoid Gatherings. Stay Home. Save Lives." on May 2, 2020 in Downey. Today, Gov. Gavin Newsom announced a new curfew order in response to growing concern over a new wave of COVID infections.

The curfew starting right before Thanksgiving week will shut down non-essential work and gatherings from 10 p.m. to 5 a.m. and applies to all counties in the most restrictive purple tier of California’s reopening plan. The order will remain in effect until Dec. 21.

Essential businesses, such as grocery stores, will be exempted. However, restaurants may offer takeout-only after 10 p.m. and people can walk their dogs during curfew hours, California’s top health official said during an update today.

“COVID can go from zero to 60 miles per hour very quickly,” said California Health and Human Services Secretary Dr. Mark Ghaly in a livestream update. “Today’s collective actions target activities that are particularly high risk while minimizing the social connections we all need.”

Ghaly said there is “no single culprit” behind California’s current spike in COVID-19 cases, citing a combination of colder weather bringing people indoors, gatherings for holidays like Halloween and Veteran’s Day, the gradual reopening of businesses across the state, and more people traveling.

As California joins Ohio and other states and cities in mandating curfews, public health experts are mixed on whether curfews are effective in curbing the spread of disease.

“They seem like the worst sort of compromise,” said Tara C. Smith, professor of epidemiology at the Kent State University College of Public Health. “They’re not supported by evidence or public health professionals, so they undermine any claim of following the science, and they give cover for leaders who want to be seen as ‘doing something’ even though they likely won’t be effective.

“It’s frustrating — at this point in the pandemic we really need brave leaders to make the hard calls and protect their citizens,” she said.

Still, any measure that limits the opportunity for people to gather will help bring COVID-19 rates down, said Anne Rimoin, professor of epidemiology at the UCLA Fielding School of Public Health.

“Curfews in and of themselves aren’t going to make all the difference,” Rimoin said. “Wearing masks, social distancing and avoiding getting together with people outside their own households — those are the key things that will make a difference. It’s a layered approach.”

Los Angeles County officials on Wednesday ordered restaurants, breweries, wineries, bars and other non-essential retail stores to close from 10 p.m. to 6 a.m. — not a curfew, but a restriction on operating hours.

While business backlash has been intense to past state shutdown orders, initial reactions to the curfew were more muted. That’s in large part because many restaurants and breweries have already altered their operations more drastically — moving to takeout-only orders, investing in elaborate new outdoor dining setups or closing even earlier to keep costs down. Bars still open late are likely to bear the brunt of the new health orders.

“This curfew has very little, if any, impact on the brewing industry,” said Leia Bailey, associate executive director of the California Craft Brewers Association.

Breweries, for instance, are classified as bars under current state rules, so they must serve a meal to open. That’s led to major expenses and logistical hassles for those that don’t already have full commercial kitchens, leaving them at the mercy of food trucks or other outside vendors to operate.

“What does the meal make inherently safer?” Bailey said. “The wineries don’t have those regulations. We’ve really struggled to get an answer.”

While the curfew is enforceable, it is up to local governments to carry that out, Ghaly said.

When the order goes into effect on Saturday, local jurisdictions can “use it to the extent that they believe it helps them control these activities that could add to the transmission,” Ghaly said.

But it is not clear if local law enforcement would enforce the governor’s latest restriction.

Sacramento Sheriff Scott Jones said his department wouldn’t enforce the curfew but instead route complaints to the county’s health office. And Fresno County, like most counties, has opted for voluntary compliance.

“That’s been our stance all along — we don’t go out and enforce wearing a mask or when someone is out past a certain time,” said Tony Botti, a spokesperson with the Fresno County Sheriff’s Office.

The timing of the retrenchment just before the busy holiday season is “the worst possible” for businesses that rely on end-of-year spending to stay afloat, said Rob Lapsley, president of the California Business Roundtable.

He interpreted the curfew as an acknowledgment that social gatherings are the state’s main target, rather than activities during normal business hours. Still, Lapsley is one of several business advocates who has been frustrated by a lack of comprehensive public data on precisely where virus transmission is occurring in California — private homes versus retail shops or restaurants, for example — as well as a failure to enact state economic stimulus measures after federal talks crumbled this fall.

“Governor, you just found out you’ve got $26 billion more in the budget than what was anticipated, so is there anything there?” Lapsley said, adding that a state COVID-19 economic task force also has yet to propose a concrete path forward for struggling businesses. “We don’t see anything from them. It’s like they don’t care.”

Newsom had hinted at a curfew last week when he abruptly rolled back many counties’ reopenings and toughened the state’s mask order. Now, 41 of the state’s 58 counties — representing nearly 95% of Californians — are in the most restrictive purple tier of the state’s reopening plan.

The governor has faced withering criticism, including from his 2018 Republican challenger John Cox, after attending a dinner party for a lobbyist at the luxe French Laundry restaurant in Napa after exhorting Californians to stay home and cancel their Thanksgiving gatherings.

Until recently, California seemed to have escaped the startling climb in COVID-19 cases across the nation, but in the past two weeks, cases and hospitalizations have risen sharply. More than 11,000 cases and 106 deaths were reported today, bringing California’s coronavirus death toll to 18,466.

“We are sounding the alarm,” Newsom said in a statement. “It is crucial that we act to decrease transmission and slow hospitalizations before the death count surges. We’ve done it before and we must do it again.”

CalMatters reporters Lauren Hepler and Ana B. Ibarra contributed to this report.