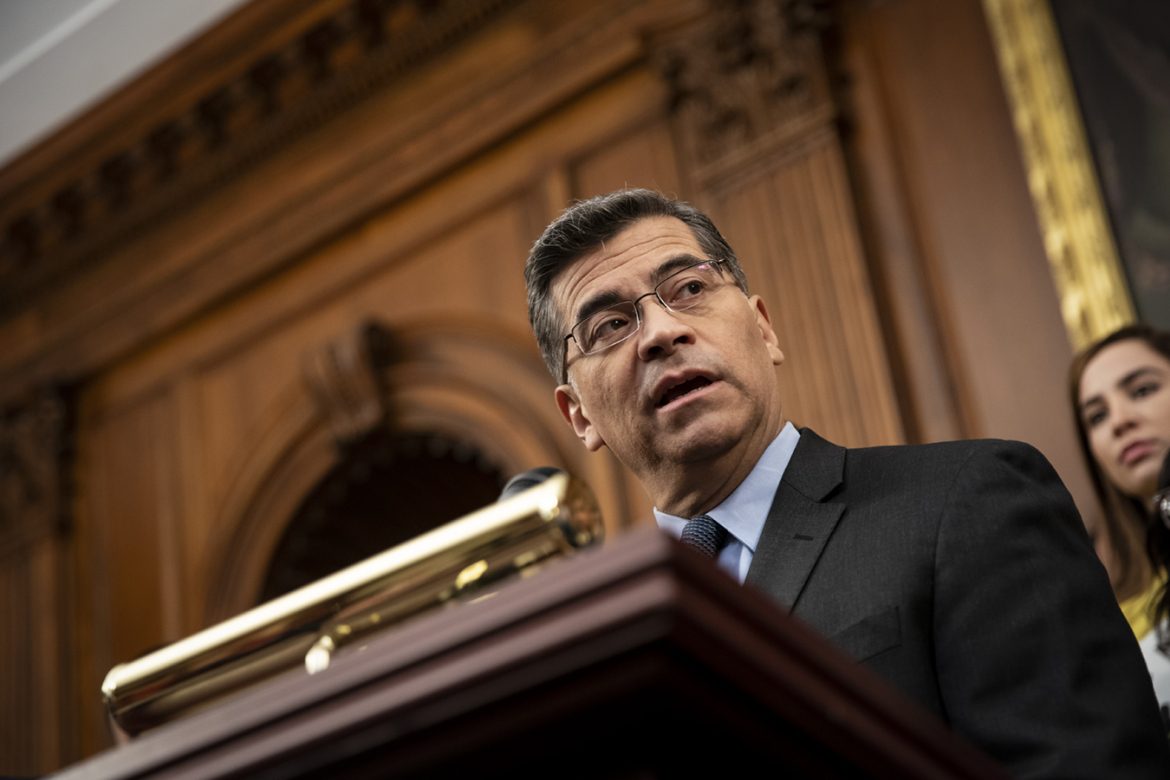 SACRAMENTO — When the U.S. Supreme Court hears a case Tuesday that could decide the fate of the Affordable Care Act, California will be leading the defense to uphold the federal law that touches nearly every aspect of the country’s health care system.

It’s usually the federal government’s job to defend a federal law, but President Donald Trump’s administration wants this law, also known as Obamacare, to be overturned.

So California Attorney General Xavier Becerra, backed by more than 20 other states, is defending the law against the challenge brought by a coalition of Republican state officials two years ago.

Becerra has been one of Trump’s most formidable adversaries, taking the administration to court scores of times over its policies, ranging from immigration and birth control to climate change. He is considered one of the leading contenders to fill the Senate vacancy that will open now that Sen. Kamala Harris of California has been elected vice president.

“Just as vigorously as a president and his administration are fighting to destroy the Affordable Care Act, we are fighting to save it for every American,” Becerra told reporters in a press conference Monday.

Should the court overturn the entire law, the impact would be felt widely. The law provides health insurance to more than 23 million Americans. It allows qualified people to buy subsidized insurance through federal or state insurance exchanges; permits states to expand their Medicaid programs to more people; prevents insurance companies from denying coverage to people with preexisting medical conditions; bans lifetime limits on coverage; adds benefits to Medicare; and allows children to stay on their parents’ plans up to age 26.

At issue in California v. Texas is the federal tax penalty for not having health insurance, as the law requires. The Republican-led Congress in 2017 zeroed out the penalty but kept the rest of the health law intact, a move Becerra and some other legal experts say shows congressional intent to support the law. The Republican state officials, however, say the loss of the tax invalidates the mandate to have insurance — as well as the entire law.

Becerra said it’s possible the court may determine that the challengers don’t have standing to sue the government because no one has been harmed by a zero-tax penalty.

Although the court has twice upheld the federal health care law, the composition of the court has changed since its last ACA ruling in 2015. Trump has appointed three conservative judges since then. Two replaced other conservatives, but Amy Coney Barrett, who was confirmed in late October, took the seat of a liberal icon, Justice Ruth Bader Ginsburg.

Abbe Gluck, faculty director of the Solomon Center for Health Law and Policy at Yale Law School, said that if the court believes the health insurance requirement is unconstitutional without the penalty, it should just hold that section of the law invalid but not overturn the entire law.

But “I have learned that you can never predict what happens in court when it comes to the Affordable Care Act,” Gluck said. “And that is why there is this heightened sense of concern, because the statute has become so fundamentally important to one-fifth of our economy and the health care of virtually all Americans.”

Becerra talked to California Healthline’s Samantha Young about his defense of Obamacare and the far-reaching influence of the law. The interview has been edited for length and clarity.

Q: What are the chances the Supreme Court could overturn the Affordable Care Act?

Q: The makeup of the U.S. Supreme Court has changed since it last ruled on the ACA. Why do you think these justices will rule the same way?

Q: What should the public pay attention to during the oral arguments?

One thing interesting to watch is how the court interprets the actions taken by Congress in 2017 when they passed the tax break bill and zeroed out the individual mandate fee or penalty. Now, we’re looking at a president and at least one house in Congress that’s prepared to defend the Affordable Care Act. How might the court look at the fact that another Congress could reinstitute part of that mandate?

What does that do to the legal argument that having zeroed out the mandate somehow triggered the unconstitutionality of the entire law? I think that’s a question the court will have to examine.

The worries return. Preventative care under Medicare would be gone. The days when Americans don’t have to worry about going personally bankrupt for having visited a hospital would pretty much be gone.

I’ve got three daughters. There was a time when all three of them as adults were on our health care coverage. That would be gone because the provision that allows adult children under the age of 26 to remain on a parent’s coverage would disappear. I could go on and on.

Q: Could states, including California, afford to step in on their own?

I don’t know if there’s any state who has the capacity to replace what the Affordable Care Act does. It’d be almost insurmountable. Part of that is because we can’t replicate some of the things that the federal government can do. We don’t have that federal jurisdiction, we don’t have that breadth and depth of reach.

Q: If the court overturns the ACA, can’t Congress pass piecemeal protections that have Republican support, such as coverage for preexisting conditions?

We have heard Republicans say “repeal and replace” for more than 10 years, and it’s been empty rhetoric from the beginning. I’ve gotta tell you that for parents who have children with preexisting medical conditions, it is no comfort to have someone promise you that they will replace a right that you know you now have for your child to visit a hospital. And, why would you throw that away for an empty promise that’s 10 years old?

Most Americans would say, Keep building on the Affordable Care Act. Let’s make it better, but don’t scrap what’s worked.

Q: How do you know the Affordable Care Act is working?

The Affordable Care Act made it possible for working families to secure coverage and that’s huge. That’s the kind of burden that’s lifted off your soul.

Q: Do you think having a President Joe Biden and a Vice President Kamala Harris in the White House will lead to an improved Affordable Care Act?

As a candidate for president, Joe Biden said that he would build on the success of the Obama-Biden presidency and make sure that we continue to increase the number of Americans who have access to affordable health care. The good thing is you finally have someone at the top of the totem pole who says we’re going to make it better. And that’s why this election was so important.