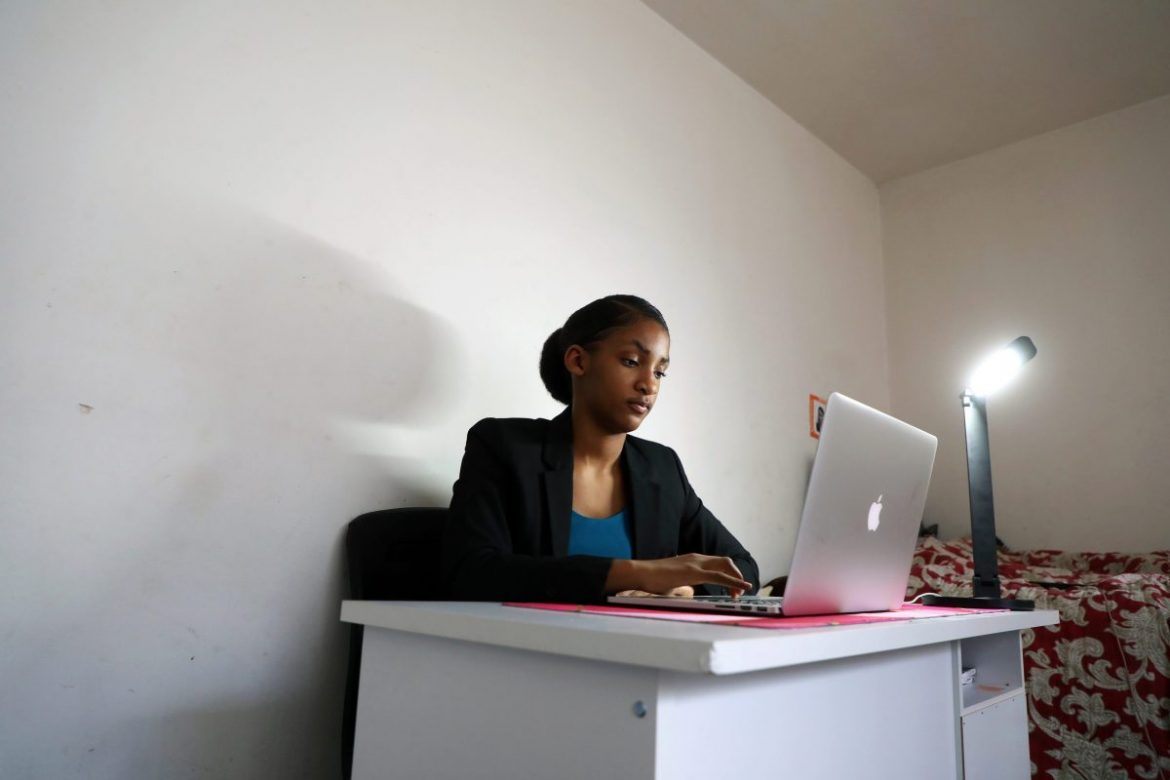 Oakland High School senior Mia Irvin-Pollard gets ready to start her work day as an intern for Okta Inc. from the apartment she shares with her grandmother on Wednesday, Nov. 18, 2020, in Oakland.

High school senior Mia Irvin-Pollard had hoped to finally win a title running track this year. She wanted to ramp up fundraising as the head of her school’s Black student union. But the pandemic quickly put a dent in those plans to build up her college résumé for the first step in her journey to become a successful Black woman in tech.

For Irvin-Pollard, that has placed even more importance on a traditional aspiration for ambitious high school students: the prestigious internship.

With college application deadlines right around the corner, thousands of California students are still in virtual school, making it harder for them to network, complete extracurricular activities and get critical internships they hope will get them into the colleges of their choice.

“In a way, they have fewer chances and less of a fallback,” said Till von Wachter, professor of economics at UCLA.

Opportunities available to high schoolers weren’t spared from the economic downturn which cost the jobs of millions of Californians: by April, internship openings had dropped by more than half, according to the job hiring site Glassdoor. And for students of color like Irvin-Pollard who are eager to get into tech, it feels like the challenges have gotten even tougher.

Students say the pandemic has made it harder for them to build relationships with teachers and future professors. With the UC system waiving SAT scores for incoming freshmen and many extracurricular activities canceled, internships are likely to bear more weight than usual for college entrants, according to counseling service providers.

Irvin-Pollard has already bucked the odds and landed a paid internship at a risk management company. Black students are underrepresented in paid internships and over-represented in unpaid ones, according to a survey of roughly 4,000 graduating college students recently published by the National Association of Colleges and Employers. Meanwhile, Hispanic high school students are more likely than others to have never had an internship.

Those still willing to pursue a career in tech will face persistent inequalities. Not only are people of color underrepresented in computer and engineering occupations, but they are also disproportionately working as service workers for tech firms, according to a new study by Working Partnerships USA.

Even before the pandemic, Irvin-Pollard knew her chances of attending a top-tier university or getting recruited for one of the tech giants’ internships were slim: She can’t afford the better colleges, which she saw as a prerequisite for a future career in tech. “I come from a low performing area and they don’t often look there,” said the straight-A Oakland High School student. “So, for a long time I really just focused on my grades because that’s all I had the opportunity to do.” If her dream of pursuing a degree in electrical engineering is to materialize, she knows her biggest hope is for her college applications to be strong enough to get a scholarship.

Irvin-Pollard’s internship may help. She got it through Genesys Works, a Texas-based nonprofit with offices in Oakland, which provides eight-week summer training sessions to high school juniors in underserved areas. After training, some students are placed in internships during their senior year. In September, Irvin-Pollard started as an engineering intern at Okta Inc., where she works from home 20 hours a week, creating charts and reports from large datasets and onboarding new employees.

“Talent that comes from nontraditional backgrounds, unfortunately if they hadn’t been offered opportunities like this, they would’ve probably not gotten there,” said Paul Chapman, a spokesperson for Box, a Silicon Valley cloud management company that’s been partnering with Genesys Works for five years. Chapman said Box has over the years hired multiple interns into full-time jobs.

That was the case for Michelle Villagran, who after a high school internship at Peet’s Coffee became a college freshman intern at PG&E, where she quickly was offered a full-time position the next year, a job she started while she was still a sophomore. “Working there allowed me to see [that] opportunities are handed out to students that don’t look like me way more than students that look like me,” said Villagran, who juggled her new job and college classes.

At 23, the East Oakland native now works as a data and software specialist for a small analytics consulting firm. She recently found an internship there for her little sister.

Recognizing the need to shake up their disproportionately White and male workforces, many of Silicon Valley’s tech giants in 2014 started to publish diversity reports and have invested in programs to support local students.

Facebook, for example, last summer sponsored an initiative to offer paid internships for more than 1,000 underserved students in San Francisco. Google committed $10 million to help 3,000 students of color and low-income students join STEM and computer science classes in the Bay Area. Facebook’s tech workforce has gone from 1% to 1.7% Black and 3% to 4.3% Latinx, while Google’s tech workforce is 5.5% Black and 6.6% Latinx. California is 6.5% Black and 39.4% Latinx.

The Central Valley-based nonprofit Digital NEST wants to see that disparity change. The organization offers class credits and work opportunities in tech to students in underserved areas. This week, it announced it is opening offices in Gilroy and plans six more offices in the next few years. “We’re going to surround the Bay Area with highly-skilled youth from low-income areas,” said founder Jacob Martinez, “and challenge Silicon Valley to start looking at talent in their own backyard.”

Giselle Mora, a Digital NEST course participant and Watsonville High School senior, said she’s found it hard to stay motivated without access to the school’s in-person resources and activities. The young Latina hasn’t gotten an internship yet to boost her application, but “now that I have a bit of background in that field, it’s really not as scary.”