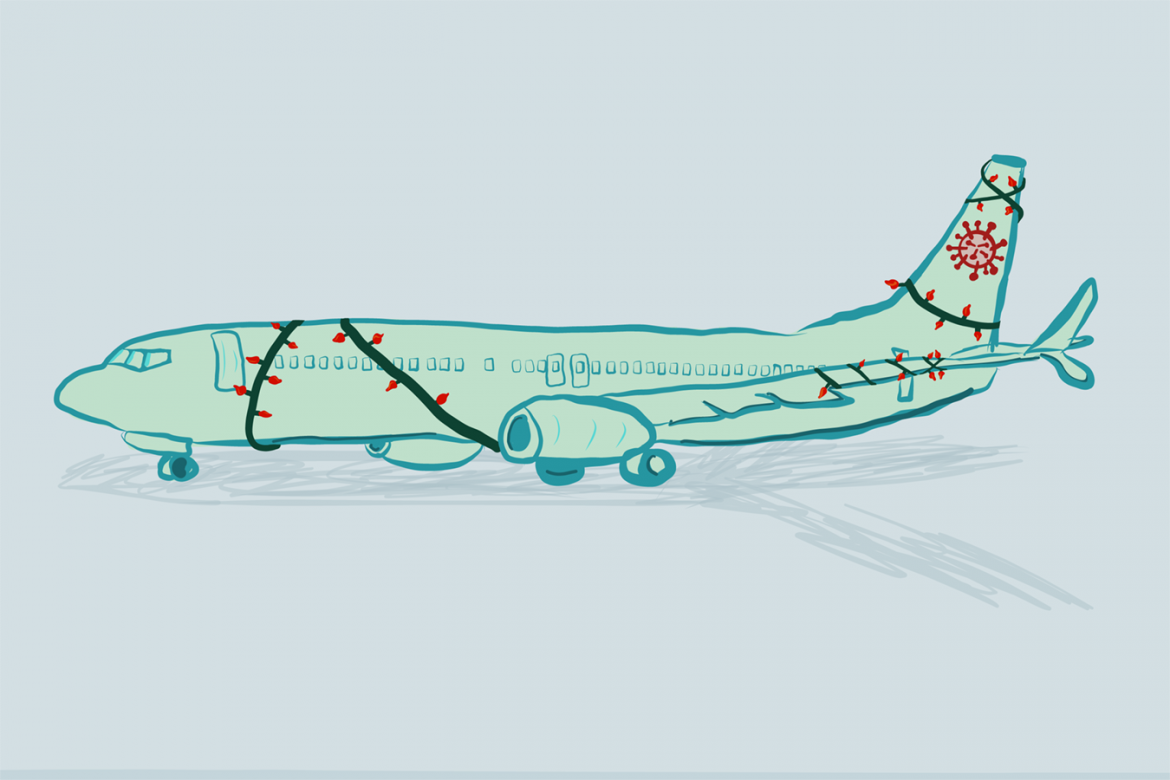 The holidays are approaching just as COVID-19 case rates nationwide are increasing at a record-breaking pace, leading to dire warnings from public health experts.

The Centers for Disease Control and Prevention has issued cautions and updated guidelines related to family gatherings. Dr. Anthony Fauci, a White House coronavirus adviser and director of the National Institute of Allergy and Infectious Diseases, said in interviews that his kids won’t be coming home for Thanksgiving because of coronavirus risks. “Relatives getting on a plane, being exposed in an airport,” he told CBS News. “And then walking in the door and saying ‘Happy Thanksgiving’ — that you have to be concerned about.”

Are Americans listening? Maybe not. Especially as airlines, reeling from major revenue blows since the pandemic took hold in March, tell passengers they can travel with peace of mind and sweeten the deal with special holiday fares.

The airlines argue more is now known about the virus and recent industry-sponsored studies show flying is just as safe as regular daily activities. They also tout policies such as mask mandates and enhanced cleaning to protect travelers from the coronavirus.

Time for a reality check.

Americans who do choose to fly will be subject to evolving COVID safety policies that vary by airline, a result of the continuing lack of a unified federal strategy. Under the Trump administration, government agencies such as the Federal Aviation Administration and the Centers for Disease Control and Prevention have failed to issue and enforce any national directives for air travel.

And, though President-elect Joe Biden has signaled he will take a more robust federal approach to addressing COVID-19, which may result in such actions, the Trump administration remains in charge during the upcoming holiday season.

Here’s what you need to know before you book.

Airlines Say It’s Safe to Fly During the Pandemic. Is it?

The airline industry pins its safety clearance to a study funded by its leading trade group, Airlines for America, and conducted by Harvard University researchers, as well as one headed by the Department of Defense, with assistance from United Airlines.

Both reports modeled disease transmission on a plane, assuming all individuals were masked and the airplane’s highly effective air filtration systems were working. The Harvard report concluded the risk of in-flight COVID-19 transmission was “below that of other routine activities during the pandemic, such as grocery shopping or eating out,” while the DOD study concluded an individual would need to, hypothetically, sit for 54 straight hours on an airplane to catch COVID-19 from another passenger.

But these studies’ assumptions have limitations.

Despite airlines’ ramped-up enforcement of mask-wearing, reports of noncompliance among passengers continue. Most airlines say passengers who outright refuse to wear masks will not only be refused boarding, but will also be putting their future travel privileges at risk. Recent press reports indicate Delta has placed hundreds of these passengers on a no-fly list. Some passengers may still try to skirt around the rule by removing their mask to eat or drink for an extended time on the flight, and flight attendants may or may not feel they can stop them.

And though public health experts agree that airplanes do have highly effective filtration systems spaced throughout the cabin that filter and circulate the air every couple of minutes, if someone who unknowingly has COVID-19 takes off their mask to eat or drink, there is still time for viral particles to reach others seated nearby before they get sucked up by the filter.

Public health experts said comparing time on an airplane with time at the grocery store is apples and oranges.

Even if you wear a mask in both places, said Dr. Henry Wu, director of Emory TravelWell Center and associate professor of infectious diseases at Emory University School of Medicine, the duration of contact in both locales can be very different.

“If it’s a long flight and you are in that situation for several hours, then you are accumulating exposure over time. So a one-hour flight is 1/10 the risk of a 10-hour flight,” said Wu. “Whereas most people don’t spend more than an hour in the grocery store.”

Also, both studies analyzed only one aspect of a travel itinerary — risk on board the aircraft. Neither considered the related risks involved in air travel, such as getting to the airport or waiting in security lines. And public health experts say those activities pose opportunities for COVID exposure.

“Between when you arrive in the airport and you get into a plane seat, there is a lot of interaction that happens,” said Lisa Lee, a former CDC official and associate vice president for research and innovation at Virginia Tech.

And while Wu said he agrees that an airplane cabin is likely safer than other environments, with high rates of COVID-19 in communities across the U.S., “there is no doubt people are flying when they’re sick, whether they know it or not.”

Another data point touted by the airline industry has been that out of the estimated 1.2 billion people who have flown so far in 2020, only 44 cases of COVID-19 have been associated with air travel, according to data from the International Air Transport Association, a worldwide trade group.

But this number reflects only case reports published in the academic literature and isn’t likely capturing the true picture of how many COVID cases are associated with flights, experts said.

“It’s very difficult to prove, if you get sick after a trip, where exactly you got exposed,” said Wu.

The low count could also stem from systemic contact-tracing inconsistencies after a person with COVID-19 has traveled on a flight. In a recent case, a woman infected with the coronavirus died during a flight and fellow passengers weren’t notified of their exposure.

That may be due to the decentralized public health system the U.S. has in place, said Lee, the former CDC official, since contact tracing is done through state and local health departments. The CDC will step in to help with contact tracing only if there is interstate travel, which is likely during a flight — but, during the pandemic, the agency has “been less consistently effective than in the past,” said Lee.

“Let’s say there is a case of COVID on a flight. The question is, who is supposed to deal with that? The state that [the flight] started in? That it ended in? The CDC? It’s not clear,” said Lee.

Is Now the Time to Fly?

Most airlines have implemented safety measures beyond requiring masks, such as asking passengers to fill out health questionnaires, enhancing cleaning on planes, reducing interactions between crew members and passengers, and installing plexiglass stations and touchless check-in at service desks.

This policy change is a result of airlines’ lack of cash on hand, said Robert Mann, an aviation analyst. It also reflects a rising demand from consumers who feel increasingly comfortable traveling again, especially as holiday gatherings beckon.

“It was easy to keep middle seats empty when there wasn’t much demand,” said Mann.

American, United, Alaskan and Hawaiian, among others, offer some form of preflight COVID test for customers traveling to Hawaii or specific foreign destinations that also require a negative test or quarantine upon arrival. JetBlue recently partnered with a company to offer at-home COVID tests that give rapid results for those traveling to Aruba.

Airlines are likely to expand their preflight COVID testing options in the next couple of months. “This is the new dimension of airline competition,” said Mann.

But is it a new dimension of travel safety?

Emory’s Wu said there is certainly a risk of catching the coronavirus if you travel by plane, and travelers should have a higher threshold in making the decision to travel home for the holidays than they would in years past.

After all, COVID case rates are surging nationwide.

“I think the less folks crowding the airports, the less movement in general around the country, will help us control the epidemic,” said Wu. “We are worried things will get worse with the colder weather.”