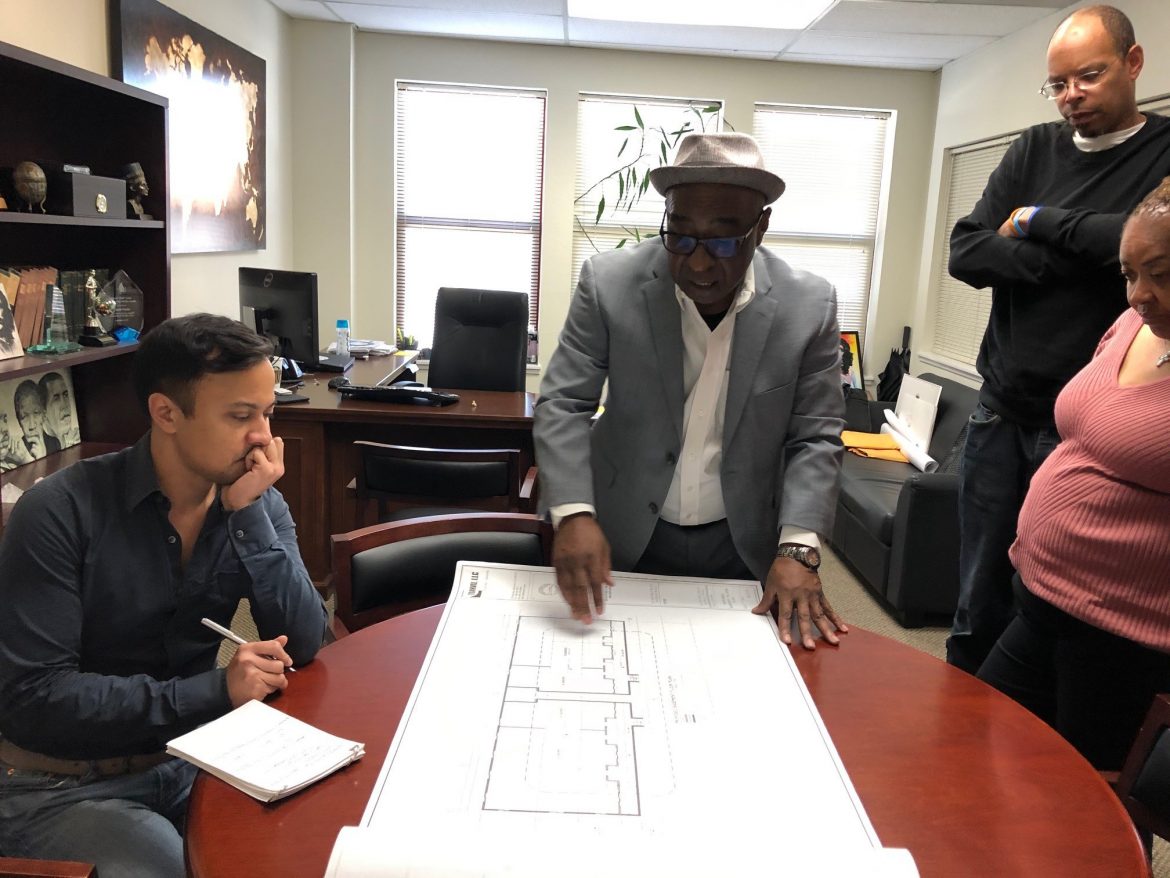 Donald Frazier, seen here leading a meeting for a new housing project, has dedicated most of his career to providing much needed social services and equal opportunities for the Black community. (Photos courtesy of BOSS)

Not many people think of Arizona as the land of self-discovery, but for Donald Frazier, it changed the course of his life.

In 1989, after a childhood informed by poverty in Chicago and some time moving around the Southwest, Frazier enrolled at the Amity Foundation treatment center in Tucson to address his alcoholism. For years, Frazier had been unable to define the origin of his trauma, before acknowledging multiple institutional factors were at play.

“I learned a lot about who I am, and that’s when I really got into working in the social services, like homelessness and re-entry,” he recalled recently. “A lot of the conditions that I was living in were causal effects of my responses to things that impacted me as a kid.”

For the past seven years, Frazier has served as the executive director of Berkeley’s Building Opportunities for Self-Sufficiency (BOSS), a nonprofit founded 50 years ago to address the displacement of people with mental illness. Under Frazier’s leadership, BOSS has expanded its outreach and added such programs as the Social Justice fellowship, re-entry resources for formerly incarcerated people, and treatment support for those dealing with substance abuse.

Frazier’s work at BOSS this month earned him the Social Impact Award at the virtual East Bay Philanthropy Awards.

“I’m here to serve others,” he said of the award. “If I have the opportunity to make a difference, that’s my job, for the rest of my life; to be a voice for the people who don’t have one.”

Frazier, the youngest of 11 children, lived for a time in Chicago’s Cabrini-Green housing projects. “The poverty and economic conditions, racial segregation, inequitable health outcomes, crime, violence, it was all there centered in the community,” Frazier said. “Growing up poor creates a mindset, I think, and I think that all that came with that really impacted me in a traumatic way. I started running the streets with gangs like the Black Gangsta Disciples, in and out of county jail.”

By the age of 23, Frazier had a family of his own to support. He had filled out paperwork for the Air Force when a local nonprofit offered him the chance to attend college at William Penn University in Iowa, where he studied English and Sociology.

Upon graduation and after his time in Arizona, Frazier became certified as a counselor. In San Diego, he helped implement the first in-prison drug treatment program at the Richard J. Donovan Correctional Facility.

Frazier arrived in San Francisco in 1999, and served as the chief development officer of Walden House, now known as HealthRIGHT360, where he worked on the African American Health Disparity Project.

“We got then-mayor Willie Brown at the Fairmont for a ‘health in SF’ presentation (that showed) Black folks were at the bottom of every health indicator — stroke, HIV, heart disease, homicide, prenatal death,” he said. “I saw people’s jaws drop to the table. It was awful. At that moment it kind of shifted the entire mood of the room.” That same day, he said the CEOs of major Bay Area hospitals, including San Francisco General and UCSF Health, committed to combating health disparities in the African American community.

He was intrigued by the opportunity to build new programs at BOSS. “When I got here, the organization was mainly focused on homelessness and housing. We did a local environmental survey for violence, homicide, poverty in Oakland, Berkeley and Hayward at the time. East and West Oakland were the two dominating epicenters by far.”

Dan Scarola, a former executive director of the Alameda County Community Food Bank and a member of the BOSS board of directors, was among those who nominated Frazier for the Social Impact award.

“He’s done a wonderful job,” Scarola said of Frazier. “Unfortunately homeless organizations are always struggling with funding, and when Donald came in we were in that situation. He made changes that needed to be made. The organization is running much more smoothly, staff is more in tune with what’s going on and financially we’re in better shape. It just made sense that we suggest that Donald’s name be up for (the award).”

“I’m here to serve others. If I have the opportunity to make a difference, that’s my job, for the rest of my life; to be a voice for the people who don’t have one.”

Like Frazier, many BOSS employees have lived through what they are trying to repair and prevent.

“Because they are from those marginalized communities, they’re extremely valuable assets. A lot of it is relatable to me, because I’ve experienced just about everything they’ve experienced,” Frazier said. “Their role is to tell their story, the conditions that they came from.”

The pandemic has interfered somewhat with BOSS’s hands-on approach. Advocacy is not as direct, and the training programs and fellowships are now held remotely. Frazier and partners in Los Angeles are in the early stages of developing a collaborative re-entry organization to advance BOSS’s goals on a statewide scale.

BOSS has also taken the lead in founding a new network of Oakland-based grassroots organizations to address the steep disparities in how minority communities have been impacted by the pandemic, called Oakland Frontline Healers (OFH).

One of its partners is The East Oakland Collective (EOC), founded in 2016 by Executive Director Candice Elder to specifically address the disparities in the African American-dominant area from Hyde Street to San Leandro. Since the beginning of the pandemic, EOC has increased its food delivery program from 400 meals twice a week to upwards of 2,000 a day, five days a week. They also deliver meals to over two dozen encampments for unhoused people, and thanks to BOSS, have been able to provide hotel housing vouchers.

“Most systematic issues were exacerbated by COVID. I’m really proud to be a part of OFH, and grateful to BOSS for orchestrating that. These are community-backed, POC-led organizations in Oakland, many long-standing,” said Elder. “It’s great to get such a large group of folks together who have never had the time to talk together before. It’s been a highlight, this coalition forming.”