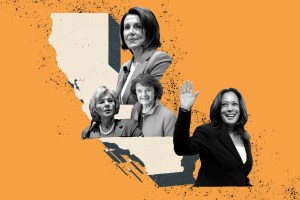 With California’s junior senator Kamala Harris poised to become America’s first female vice president, a remarkable pattern has taken hold: Once again, a woman from California is making history in the nation’s capital.

“While I may be the first woman in this office, I will not be the last,” Harris vowed in her victory speech Saturday night.

California also is home to the first woman to become Speaker of the House, Democrat Nancy Pelosi of San Francisco, who first won the post in 2007. And, when voters elected Democrats Barbara Boxer and Dianne Feinstein in 1992, California became the first state in the nation to send two women to the United States Senate.

But such ceiling smashing has not happened in Sacramento. When it comes to women leading in state politics, California lags other parts of the nation. More than half the states have had a woman governor, but California never has. The Golden State elected Eleni Kounalakis its first female lieutenant governor just two years ago — something Vermont did in 1955. Harris, the Democrat who will serve as Joe Biden’s vice president, became California’s first woman elected attorney general in 2010. But Rhode Island elected the nation’s first female attorney general in 1985.

Similarly, though women have been prominent in California’s legislative leadership in the last dozen years, other states blazed that trail long ago. California Senate leader Toni Atkins, a San Diego Democrat, became the state’s first woman to hold the post in 2018, and is one of three women to have served as Assembly speaker. Women also lead both Republican caucuses. But the first state legislature to choose a woman speaker? North Dakota’s, in 1933.

Even though women are poised to hold more seats in the California Legislature than ever before when votes from this month’s election are all tallied, the number is likely to comprise roughly one-third of state lawmakers. At the start of the Legislature’s last session, California tied Georgia for 20th place in female representation. Next door in Nevada, women made up more than half the state legislature.

“There is a great tradition of California women leading at the federal level,” said Susannah Delano, executive director of Close the Gap California, which recruits Democratic women to run for elected office. “We are sort of middling on our statehouse’s gender balance.”

Women currently hold 38 of the Legislature’s 120 seats — the most ever, in part because voters chose women to fill seats vacated by a handful of men who resigned during the #MeToo movement. Between one and five more women will join them next year, depending on the outcome of several close races. That will bring women to the highest numbers they’ve ever had in the California Legislature, comprising a little more or less than a third of the body.

“We’re constantly facing the dual challenge of women who have termed out or retired, needing to replace and backfill them… and then also recruiting new women to go ahead and challenge and drive the overall numbers up,” Delano said.

By contrast, Congress does not have term limits, making it easier for a representative like Pelosi to build power over time.

“Women have a much harder time getting elected to an executive position,” said Rose Kapolczynski, a Democratic political strategist who led Boxer’s Senate campaigns.

“The many women running for president in 2020 all had impressive profiles and records and yet, none of them survived until the end. Harris didn’t stay in even for Iowa. She became vice president with an electorate of one: Joe Biden.”

Harris said Biden showed his character in selecting a woman as VP, saying in her speech Saturday that “he had the audacity to break one of the most substantial barriers that exists in our country.”

Another factor that may explain the meteoric national rise of Pelosi and Harris: their political roots in San Francisco. Cutthroat politics in the progressive city has proven to be a formidable training ground.

“People would have looked at us like we were crazy if you said a person would emerge from San Francisco and become vice president of the United States,” said Ace Smith, a Democratic political consultant who has run campaigns for Harris and fellow San Franciscan Gov. Gavin Newsom.

“But there’s a huge amount of upside in having come out of that, and it is an incredibly talented pool of people who really have to emerge from a cauldron.”

Women nationally also gained seats in Congress in this election, and are poised to make up a greater share of the House and Senate than ever before. Much of that is due to gains by Republicans, who worked to elect more women after Democratic women had a historic year of House victories in 2018. Three female House candidates in California — Democrat Christy Smith of Santa Clarita, and Orange County Republicans Michelle Steel and Young Kim — are challenging incumbent men in tight races that haven’t yet been called.

In the domino effect of politics, Harris will soon resign her Senate seat to become vice president, and Gov. Newsom will appoint a replacement to fulfill her term as senator. Which has some Californians urging him to choose another woman for the post.