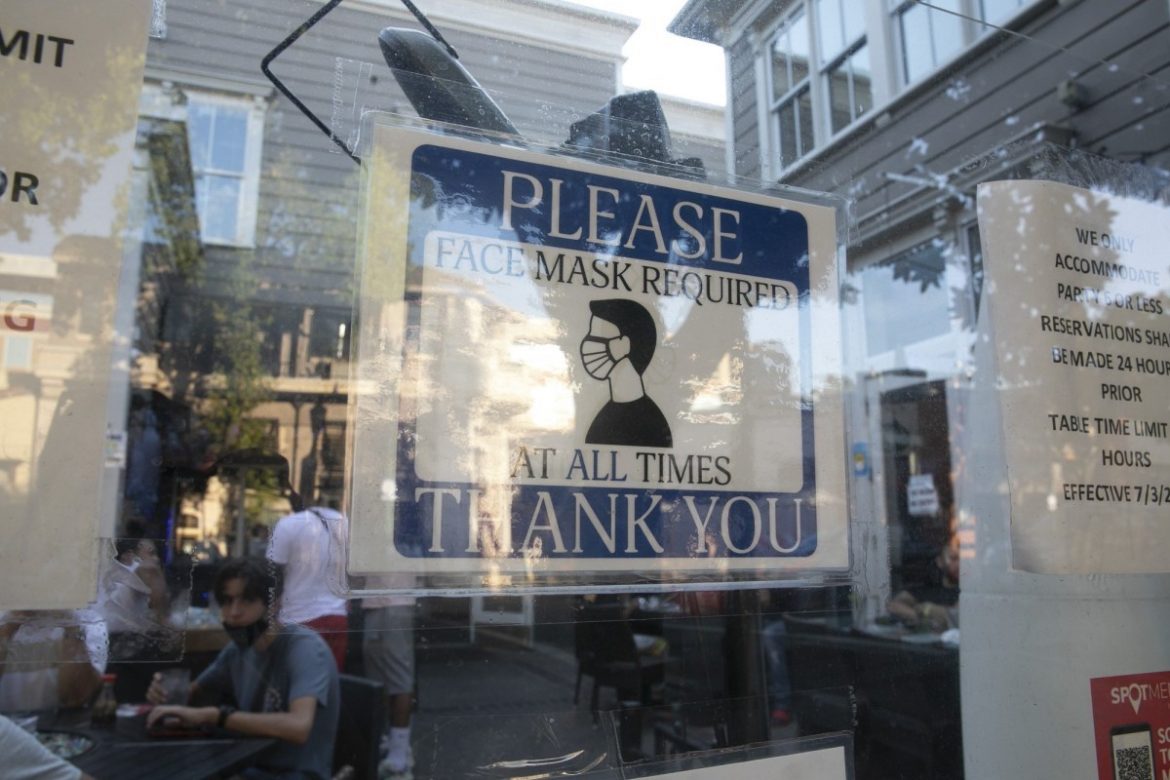 A sign requiring customers to wear a mask is posted outside Modern China Cafe in Walnut Creek on August 16, 2020.

As California’s COVID-19 daily case count climbed to nearly 10,000 – a height not seen since early August – Gov. Gavin Newsom today announced tough new restrictions as an “emergency brake” to slow a coming surge that could overwhelm hospitals during the holiday season.

Most nonessential businesses, restaurants, bars and places of worship will have to close or severely restrict their operations, starting Tuesday, as state officials either moved or kept 40 of California’s 58 counties in the most restrictive “purple” tier of the state’s reopening plan. The dramatic change will affect about 94% of Californians.

“We’re moving from a marathon to a sprint,” Newsom said at a news conference. “These last 10 days have been challenging. We need to be more aggressive, more surgical, more targeted.”

Newsom also announced a tougher – but simpler – mask mandate: Californians must wear a mask whenever they’re outside their homes, with a few exceptions. People don’t have to wear masks in their cars, working in an office or room alone, or when they’re outside and farther than six feet from other people. However, they need to carry a mask and put it on when they are closer than six feet to others.

The previous mandate, announced in June, required people to wear masks in all indoor public public spaces and when they would be in close proximity to others, such as on public transit. Recent studies show that masks can protect not only others but the wearer from some droplets carrying the novel coronavirus.

Newsom also noted that a statewide curfew is being considered and that more restrictions may be coming later this week. Yet he injected a note of optimism about forthcoming COVID-19 vaccines, citing biotechnology firm Moderna Inc.’s announcement today that its experimental coronavirus vaccine appears to be nearly 95% effective in a preliminary analysis.

The news on the ground was much bleaker for state officials nationwide who are grappling with surging COVID-19 caseloads of their own.

In some California counties, test positivity and case rates have spiked so dramatically they were pushed back two tiers. Counties entering a more restrictive tier must make changes immediately—no more three-day grace periods for businesses that had reopened.

California follows other states that recently have tightened rules amid rising case numbers. Over the weekend, Gov. Jay Inslee of Washington prohibited indoor operations in restaurants and gyms, and banned indoor gatherings unless people quarantined for 14 days prior to the gathering.

Oregon implemented a “freeze” order for two weeks, which means most indoor operations must shut down, and Michigan also announced new restrictions for three weeks.

Last week, the California Department of Public Health issued a voluntary travel advisory urging people to avoid non-essential travel. It recommended that those arriving in California or residents coming home quarantine for 14 days upon their return.

Although California seemed to have escaped the worst of an alarming national surge in COVID-19 cases, hospitalizations have increased by nearly 50% in the past two weeks, Newsom said. The state’s 14-day test positivity rate—a sign of the amount of disease in the community—has jumped nearly 44% since Halloween.

As a result, state officials now will reevaluate counties’ reopenings more quickly than once every two weeks, depending on their health indicators.

Johns Hopkins University’s testing tracker lists California as one of only eight states that is currently meeting the recommended testing criteria. The World Health Organization has recommended that governments keep positivity rates at 5% or lower before reopening or easing restrictions. According to its tracker, 4.8% of tests in California are coming back positive within seven days.

California schools that have not yet reopened may not open in the purple tier. Schools that already have opened can continue to operate as long as they’re following state and county disease prevention protocols, such as mask-wearing. Elementary schools can still seek waivers to reopen in counties in the purple tier.

Newsom also apologized again for his decision to attend a Nov. 6 outdoor birthday party in Napa for one of his political advisers – exactly the type of gathering he has repeatedly urged Californians to avoid.

“I need to … practice what I preach,” Newsom said, noting that he had been out socially only three times since February. “We’re all human. We all fall short sometimes.”

The governor’s orders today were quickly felt across the state, including in Santa Clara County, which was moved back from the relatively open orange tier to the most restrictive purple tier.

Restaurants that until today could operate indoors at half-capacity must return to outdoor-only dining starting Tuesday. Churches must hold services outdoors. All retail stores must now limit capacity to 25% and gyms must close indoor operations.

“We really need everyone living and working in our county to take this extremely seriously,” said Dr. Sara Cody, the county’s health officer. “Even though it’s the holidays, we strongly discourage travel outside the Bay Area.”

San Jose’s Park Station Hashery had been poised to reopen indoor dining recently as Santa Clara County moved into the orange zone. But it held off “out of concern for the community” as cases started to rise in the past two weeks, said Johnny Montes, a general manager for the small neighborhood restaurant.

On Tuesday, the restaurant will continue its takeout and outdoor patio dining operation. Servers will wear masks and gloves and have their temperatures taken before work.

“We don’t want anybody to get sick, none of our employees and customers,” Montes said. “We’re very community oriented.”

Supervisor Wagner, she said, is looking at how the county can use CARES Act money to make winter more comfortable for outdoor businesses. “We could buy heating lamps, outdoor lighting, tents,” Lurya said. “For these businesses the show must go on.”

Gov. Gavin Newsom today announced a rollback of reopenings across the state, describing it as “pulling an emergency brake.” Here’s what you should know:

Mandates and curfews will only undermine people’s voluntary compliance, Lurya said. She added that hospitals in Orange County are well equipped and not overwhelmed at this time.