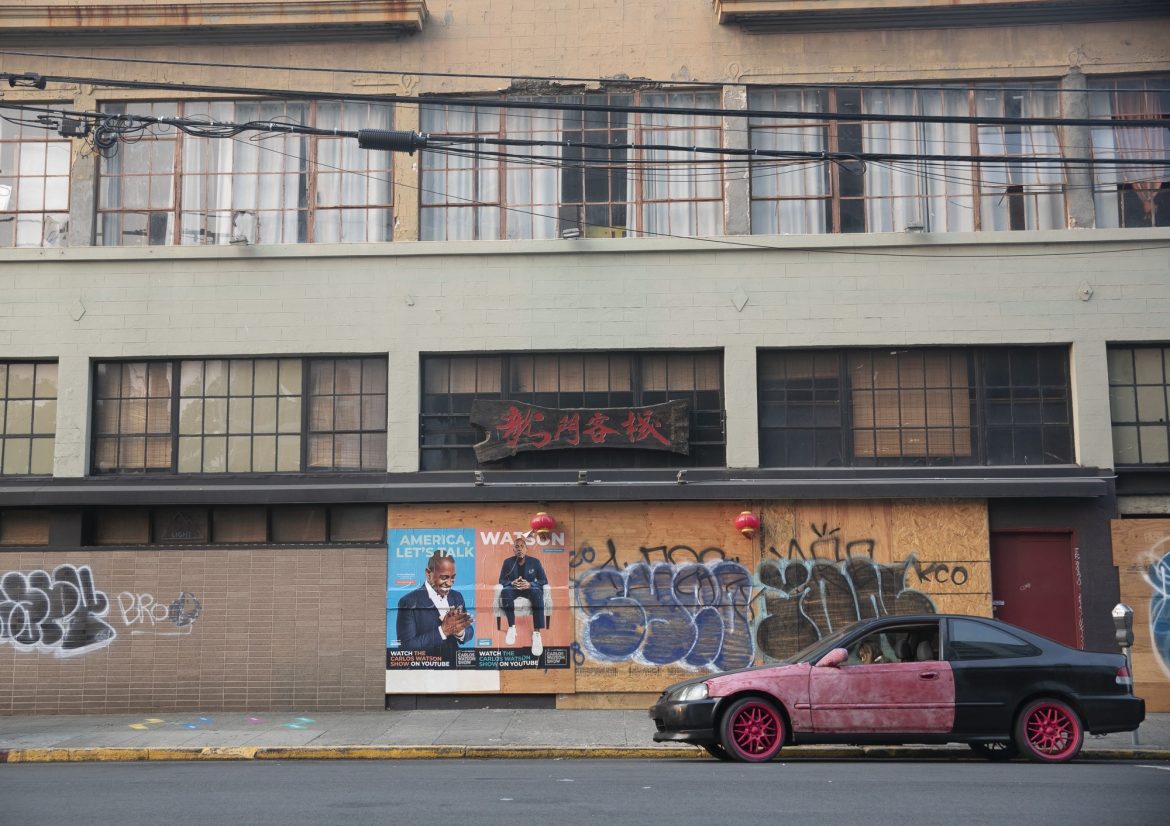 A restaurant in Oakland remains closed on Sept. 1, 2020. Photo by Anne Wernikoff for CalMatters

As Thanksgiving approaches, the mood in California isn’t too festive.

Los Angeles County, which will ban outdoor dining starting Wednesday, is considering another stay-at-home-order that would bar residents from leaving their homes unless they’re essential workers or accessing essential services. Ninety-four percent of California residents are currently under a curfew, and more could join them today, the state’s top health official warned Monday. And Gov. Gavin Newsom, still under fire for the French Laundry debacle, is quarantining at home at a critical inflection point for the state.

Amid a 77% increase in hospitalizations and 55% increase in intensive-care admissions, tensions are flaring up across the state. Protests against the curfew broke out in Huntington Beach, Redding, Fresno and other cities. A surge in weekend gun violence propelled Los Angeles to surpass 300 homicides in one year for the first time in a decade. Unemployment claims are rising again. Late-night and Los Angeles restaurants that had counted on remaining open over the Thanksgiving holiday are now facing massive losses for outdoor tents and heaters they won’t be able to use.

And although many county sheriffs aren’t enforcing the curfew, the state Department of Alcoholic Beverage Control is threatening noncompliant restaurants and bars with fines or revoked liquor licenses. It’s yet another frustration for restaurants, a group of which sued government agencies last month to recoup millions in liquor, health and tourism fees.

Although 61% of Californians said they approved of Newsom’s handling of the pandemic in October, the French Laundry fiasco has reignited a longshot attempt to recall Newsom. Meanwhile, the Secretary of State on Friday cleared for circulation a 2022 ballot initiative that would limit the government’s authority amid public health emergencies.

The coronavirus bottom line: As of 9 p.m. Monday night, California had 1,110,370 confirmed coronavirus cases and 18,726 deaths from the virus, according to a CalMatters tracker.

1. Pressure over Senate seat ramps up

Aside from steering California through a pandemic, Newsom has another politically dicey situation on his hands: who to appoint to Vice President-elect Kamala Harris’ Senate seat. The pressure on the governor is reaching new heights. Longtime Assembly Speaker and former San Francisco Mayor Willie Brown is assembling a group of prominent Black leaders to urge Newsom to appoint a woman of color, even as rumors swirl that Newsom is leaning toward Secretary of State Alex Padilla, who would be California’s first Latino senator, Politico reports.

Also on Monday, 150 of California’s biggest women donors took out full-page ads in the Los Angeles Times and San Francisco Chronicle encouraging Newsom to appoint a woman of color, Recode reports. Some of the signatories are among Newsom’s top financial backers.

Meanwhile, a myriad of Latino advocacy groups have launched statewide campaigns of their own, arguing that with Latinos making up nearly 40% of California’s population, now “is the time for Gov. Newsom to act.”

In a signal of how California’s national influence will likely grow under a Biden-Harris administration, General Motors announced Monday that it would no longer support the Trump administration in lawsuits challenging the Golden State’s authority to set its own fuel economy standards. In the stunning — and politically charged — reversal, General Motors said it supports President-elect Joe Biden’s plan to expand zero-emissions cars, CalMatters’ Rachel Becker reports. That has big implications for California, which wants to ban new gas-powered cars by 2035. General Motors also encouraged other car companies fighting California’s stricter fuel emission standards — including Toyota, Fiat Chrysler, Mazda and Mitsubishi — to abandon ongoing litigation.

3. Battle at the beach

Welcome to Oceano Dunes, the most contested stretch of sand in California. For 40 years, the park south of San Luis Obispo has not only divided two branches of state government, but also the surrounding community — and things may have finally reached a breaking point, CalMatters’ Julie Cart reports. Oceano Dunes is one of only nine state parks established expressly for motorized recreation, including off-roading and dirt biking — activities that threaten endangered animals. One state agency, the Coastal Commission, recently issued a cease-and-desist order to its sister agency, the state Department of Parks and Recreation, ordering it to stop harming imperiled birds. But the parks department — which collects fees paid by off-roaders — plans to expand motorized recreation into new areas of the park.

Baked into the conflict is a disconnect between the park’s constituencies. There are fiercely devoted off-roaders; there are conservationists determined to protect endangered birds; and there are neighbors frustrated by the dust pollution kicked up by the trucks and the violence that seems to accompany off-roading, Julie reports.