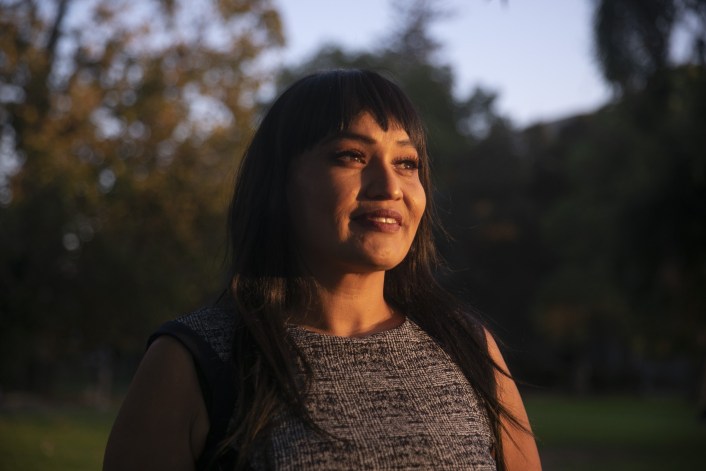 Nona Claypool, a third year student at UC Berkeley and transfer student coordinator, at Mosswood Park in Oakland on Oct. 28, 2020. Claypool, who focuses her work on recruiting Native American transfer students from community colleges, says it is often the students who would benefit most from higher education who are unable to access it.

When Ayo Banjo arrived at the University of California, Santa Cruz for his freshman year, he was surprised to find that only a small fraction, about 4%, of the campus population was Black. It was “stressful,” he recalls, to not see other people who looked like him on campus.

“Where’s the outreach?” Banjo, now a senior, remembers asking himself. “We’re supposed to be this diverse campus…but as a Black student, I didn’t feel that representation.”

So Banjo got to work creating the community he was searching for. He started an NAACP chapter on campus and ran for student body president, becoming the first Black man to be elected to the position. He partnered with the Black Student Union on a mentoring program for Black students considering UC Santa Cruz to help encourage them to come to the university.  And last year, he and other student leaders from across the UC founded the Pan African Student Association, a coalition of Black and African student unions that advocates for the welfare of Black students.

Californians voted this week by a 56.1% to 43.9% margin to continue the state’s ban on considering race, ethnicity and gender in public college admissions, hiring and contracting. But universities are pushing forward with other efforts to recruit and retain a diverse student body. Often, they’re led by students from underrepresented backgrounds like Banjo, who take time out from their studies to make their campuses more welcoming for other students like them.  They say that even though Proposition 16 — the affirmative action ballot measure —  did not pass, their work will continue.

Black and Latino students are underrepresented at the University of California compared to those groups’ share of the state’s population. Statewide, many students of color enter college but don’t graduate. Among Californians who identify as Black, Latino, Native American and Pacific Islander, about half of those who attended college left without a degree, according to a 2019 report by the Campaign for College Opportunity. That’s compared with only 20% of Asian students and 32% of white students.

The University of California runs outreach programs that provide academic advising and college application assistance to high school students who are low-income, from an underrepresented group, or the first in their families to attend college. High schoolers who participate in the programs are more likely than their peers to be admitted to and enroll at UC, according to the university. But since 2000, the annual budget for those programs has fallen from about $85 million in 2000 to just over $24 million.

And after California banned affirmative action at public universities with Proposition 209 in 1996, enrollment of Black and Native American students in UC’s outreach programs fell, too. Afraid of running afoul of the law, campuses pulled back on targeted outreach to students of color, said Fabrizio Mejia, the Assistant Vice Chancellor for Student Equity and Success at UC Berkeley.

“Back when Prop. 209 happened, I think everybody swung to the conservative. ‘We don’t want to get sued, let’s stay away from all of that,’” said Mejia.

But in recent years, Mejia said, campus leaders have begun to look for creative ways to support recruitment and retention through fundraising from foundations and individual donors, and working with students on fee referenda.

The number of staff at Berkeley’s on-campus retention and support centers has grown from about nine to more than 25 over the last eight years, Mejia said. While the centers target specific populations like transfer and formerly incarcerated students as well as those from underrepresented ethnic groups, their services are open to any interested students, Mejia said — a key element in complying with Prop. 209.

But not every campus has the resources of a Berkeley or UCLA, he said.

Berkeley junior Nona Claypool works at the Indigenous Native Coalition at UC Berkeley, one of seven on-campus recruitment and retention centers for underrepresented groups, doing outreach to Native American community college students.  A member of the Cheyenne River Sioux Tribe, Claypool grew up in Wyoming near the Wind River Reservation.

Claypool moved to California and enrolled at Laney Community College in Oakland, when she first encountered the Indigenous Native Coalition. Students from the program helped her apply to Berkeley and introduced her to the Native community there.

Inspired by her experience, Claypool is currently surveying Native American students about the challenges they face in getting to college — asking them about things like housing and financial aid. Communicating directly with students, she believes, is the best way to identify and address those hurdles.

“Native Americans represent about the smallest population in higher education,” Claypool said. “But we would benefit greatly from education. We need more tribal leaders who can speak up for tribes and assert, you know, on policy and legislation and things that affect our communities directly.”

Over the summer, the Pan-African Student Association sat down with representatives of the University of California’s Office of the President to discuss ways the UC could support its Black students. They proposed a Black research grant that would fund Black student leaders to study how the university could improve recruitment and retention in their community.

Among the topics Banjo said students hope to tackle: how to improve Black graduation rates, and why Black alumni from some campuses earn significantly less than white alumni after graduation.

“We’re trying to help shape the UC as a model for successful Black students in higher education,” he said, “while Black students are compensated for that labor as organizers and scholars.”

UC spokesperson Claire Doan said that the university was “interested in the idea of a Black research grant program systemwide” and had asked students for a detailed, written proposal. But, she added, “We cannot take any action until we have a clearer idea of our budget and whether we have the funding necessary.”

Prop. 16 would have given the UC more legal flexibility to support projects like Claypoole’s and Banjo’s. But perhaps a bigger challenge is finding the money to boost recruitment and retention of underrepresented students systemwide. The university lost $300 million in funding this year after the coronavirus pandemic put the squeeze on state budgets.

“Our capacity does not in any way meet the demand, and as California’s population has continued to grow and diversify and as students (from underrepresented backgrounds) have moved out of urban centers into more suburban areas, our ability to reach those students has been impacted,” Yvette Gullatt, UC’s chief diversity officer, told the university’s regents at a recent meeting.

On Wednesday, as the vote totals for Prop. 16 rolled in, the No on 16 campaign jubilantly declared victory over a measure that California’s Democratic-dominated legislature had placed on the ballot.

“We have successfully defeated a far-left measure in America’s bluest state!” Wenyuan Yu, the executive director of Californians for Equal Rights wrote in a statement.

UC President Michael Drake called the measure’s defeat a “setback” for the university, but added, “We will continue our unwavering efforts to expand underrepresented groups’ access to a UC education.”

Banjo said that for students working on recruitment and retention, Prop. 16’s defeat is “disheartening” but also creates an opportunity.

“Hopefully, It’s also empowering for our student organizers and communities,” he said. “Because it gives them a reason to continue to translate what could have been the benefits of Prop. 16 into an intentional plan that’s created by their campus.”

Kayleen Carter is a fellow with the CalMatters College Journalism Network, a collaboration between CalMatters and student journalists from across California. This story and other higher education coverage are supported by the College Futures Foundation.