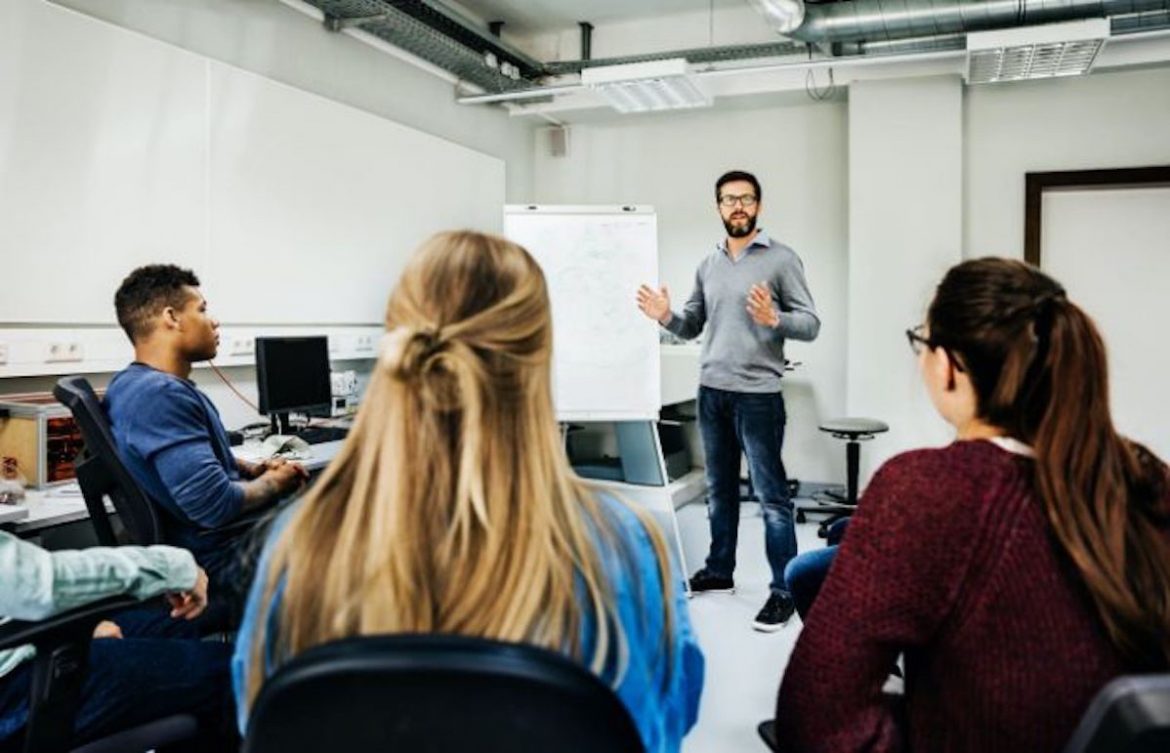 Classroom experiments show how the coronavirus can spread and who’s at greatest risk. (Photo by Tom Werner via Getty Images, The Conversation)

It doesn’t take long for airborne coronavirus particles to make their way through a room. At first, only people sitting near an infected speaker are at high risk, but as the meeting or class goes on, the tiny aerosols can spread.

That doesn’t mean everyone faces the same level of risk, however.

As an engineer, I have been conducting experiments tracking how aerosols move, including those in the size range that can carry viruses.

What I’ve found is important to understand as more people return to universities, offices and restaurants and more meetings move indoors as temperatures fall. It points to the highest-risk areas in rooms and why proper ventilation is crucial.

As we saw recently with President Donald Trump and others in Washington, the coronavirus can spread quickly in close quarters if precautions aren’t taken. University campuses have also been struggling with COVID-19. Cases among 18- to 22-year-olds more than doubled in the Midwest and Northeast after schools reopened in August.

As the case numbers rise, the risk to anyone who spends time in those rooms rises as well.

Most current models describing the role of ventilation on the fate of airborne microbes in a room assume the air is well mixed, with the particle concentration uniform throughout. In a poorly ventilated room or small space, that is likely true. In those scenarios, the entire room is a high-risk region.

However, in larger spaces, such as classrooms, good ventilation reduces risk, but likely not uniformly. My research shows that how high the level of risk gets depends a lot on ventilation.

To understand how the coronavirus can spread, we injected aerosol particles similar in size to those from humans into a room and then monitored them with sensors. We used a 30-foot by 26-foot university classroom designed to accommodate 30 students that had a ventilation system that met the recommended standards.

When we released particles at the front of the classroom, they reached all the way to the back of the room within 10 to 15 minutes. However, because of active ventilation in the room, the concentrations at the back, about 20 feet from the source, were about one-tenth of the concentrations close to the source.

That suggests that with appropriate ventilation, the highest risk for getting COVID-19 could be limited to a small number of people near the infected speaker. As the time spent indoors with an infected speaker increases, however, risk extends to the entire room, even if ventilation is good.

In the past, the transmission of respiratory diseases has focused on the role of larger particles that are generated when we sneeze and cough. These droplets fall quickly to the ground, and social distancing and mask wearing can largely prevent infection from them.

The bigger concern now is the role of tiny particles known as aerosols that are generated when we talk, sing or even just breathe. These particles, often smaller than 5 micrometers, can escape from cloth face masks and linger in air for up to about 12 hours. The Centers for Disease Control and Prevention finally acknowledged that risk on Oct. 5 after Trump was hospitalized and several other people in or close to the administration tested positive for COVID-19.

While these smaller particles, on average, carry less virus than larger particles that people emit when they cough or sneeze, the high infectivity of SARS-CoV-2 combined with the high viral load before symptoms appear makes these particles important for airborne disease transmission.

How much ventilation is enough?

To minimize COVID-19 transmission indoors, the CDC’s top recommendation is to eliminate the source of infection. Remote learning has effectively done this on many campuses. For face-to-face teaching, engineering measures such as ventilation, partition shields and filtration units can directly remove particles from the air.

Of all the engineering controls, ventilation is probably the most effective tool to minimize infection spread.

Understanding how ventilation lowers your risks of getting COVID-19 starts with air exchange rates. An air exchange of one per hour means that the air supplied to the room over one hour equals the volume of air in the room. Air exchange rate ranges from less than one for homes to around 15-25 for hospital operating rooms.

For classrooms, the current regulations of primary air flow correspond to an air exchange of about six per hour. That means that every 10 minutes, the amount of air brought into the room equals that of the volume of the room.

How high the concentration gets depends in part on the number of people in the room, how much they emit and the air exchange rate. With social distancing reducing classroom populations by half and everyone wearing masks, the air in many indoor spaces is actually cleaner now than it was before the pandemic.

Parts of the room to avoid

It’s important to remember that not all parts of a room are at equal risk.

The corners of the room will likely have a lower air exchange — so particles can linger there longer.

Being close to an air exit vent could mean that airborne particles from the rest of the room could wash over you. A study of ventilation airflow in a restaurant in China traced its role in several COVID-19 illnesses among the patrons there.

About 95% of particles in the room will be removed by a properly functioning ventilation system in 30 minutes, but an infected person in the room means those particles are also continuously emitted. The pace of particle removal can be accelerated by increasing the air exchange rate or adding other engineering controls such as filtration units. Opening windows will also often increase the effective air exchange rate.