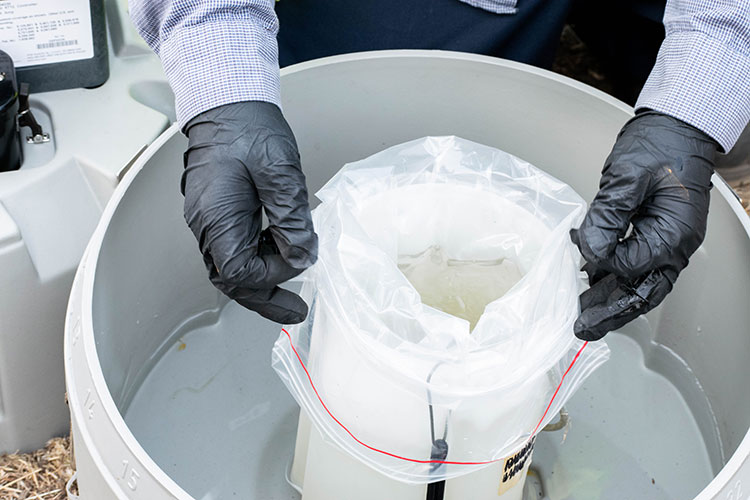 This 2-liter wastewater sample, collected from a sewer in University Village in early October, was returned to the pop-up lab for COVID-19 screening.

A team of University of California at Berkeley scientists has launched a pop-up lab to test wastewater from throughout the Bay Area to monitor for signs of the novel coronavirus.

Coronavirus researchers have observed that people who contract COVID-19 tend to shed the virus in their feces, offering an easy way to monitor the virus’ spread inside a neighborhood or an entire city. The university announced the new lab on Thursday.

“Wastewater naturally pools the waste from hundreds to even millions of people in a single sample, so if you can collect a representative sample of wastewater and analyze it, you can gain a tremendous amount of information that you likely couldn’t gain through testing people individually,” UC Berkeley professor of civil and environmental engineering Kara Nelson said.

Nelson is leading the team of scientists that will study Bay Area wastewater in a 1,200-square-foot lab located in an empty section of the university’s Hildebrand Hall.

The team plans to monitor several sewersheds — areas at which all sewers flow to a single pipe for easier sampling — for the project. For now, the lab is only analyzing the wastewater from a few thousand people and can process around 30 samples per week from 11 wastewater agencies around the Bay Area. By the end of the year, the team hopes to scale up to analyze some 200 samples per week.

“One of the huge bottlenecks in wastewater testing has just been testing capacity,” Nelson said. “This pop-up lab is the first high-throughput lab in the Bay Area that has the capacity to bring in a large number of samples and provide results quickly to public health officials.”

While wastewater testing is not as precise as the standard nasal swab tests for the coronavirus, the practice has already stopped an outbreak at the University of Arizona.

In late August, shortly after some 5,000 students moved onto the university’s campus in Tucson, university officials identified a wastewater sample from one dorm that was positive for the coronavirus.

The school then tested all 311 people who live and work in the building. Two students were found to be asymptomatic and were subsequently quarantined, preventing a potentially larger outbreak.

According to Nelson, finding vestiges of the virus within local wastewater samples can be difficult because wastewater often contains other viruses as well as other chemicals like bleach that may kill the virus before it gets to a sampling site.

People carrying the virus also shed different amounts of it in their feces, which can reduce the likelihood it is detected in a water sample.

According to the university, the lab uses cheap and easy-to-obtain materials like table salt and ethanol to isolate the virus’ RNA within a wastewater sample. The lab’s technique of using salt to extract the RNA is also highly sensitive, enabling the team of researchers to identify virus particles that have disintegrated partially while flowing through the sewer system.

Adrian Hinkle, a UC Berkeley graduate student and member of the team, said the materials used when researchers first started examining wastewater for the virus in early May were much harder to obtain than common table salt or ethanol.

“We tried to develop a method that required as few materials as possible and was fast, because we wanted to get the results as fast as possible, to inform public health authorities,” Hinkle said.

Given the wastewater test’s simplicity, the lab is able to turn around results for a water sample in three days or fewer. Sasha Harris-Lovett, a postdoctoral fellow with the university’s Berkeley Water Center, suggested wastewater testing could help public health agencies monitor areas where residents are not getting tested frequently or do not proper health care access.

Nelson said she hopes the UC Berkeley lab can serve as a model for other regions. The team is already frequently collaborating with hundreds of researchers around the world who are also focused on perfecting wastewater testing for the virus.

“We want to share information as soon as we possibly can, so that we can speed up the process for other regions that are trying to create something similar,” she said.