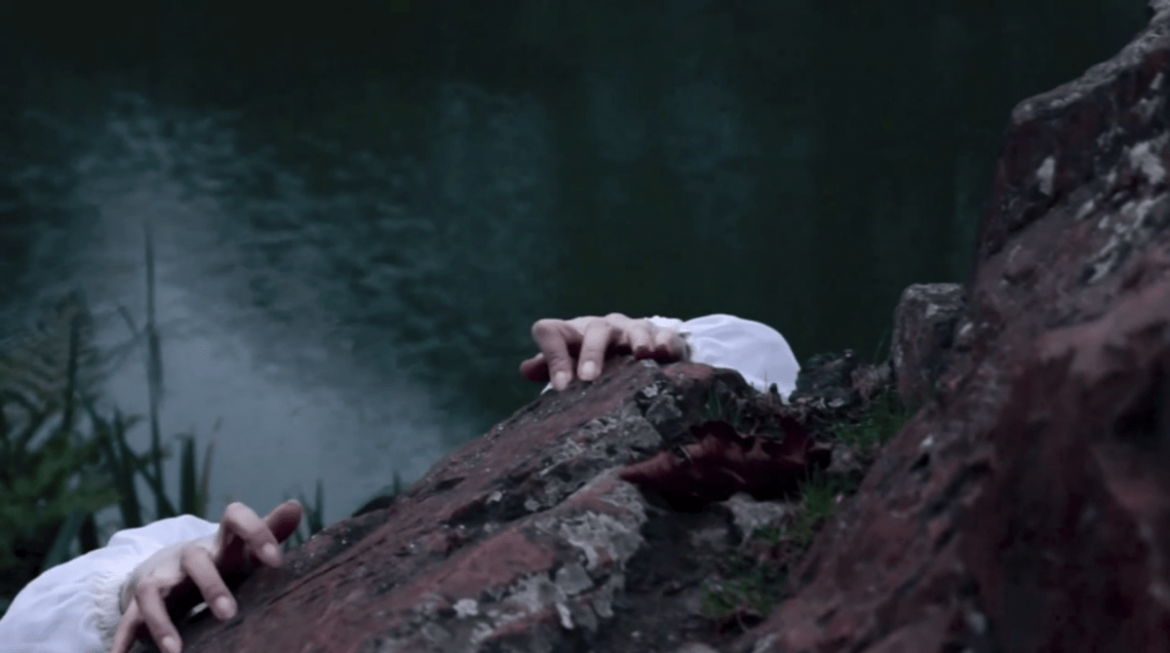 The producer/creator of the web series “The Haunted Bay” snoops around spirited places where she unearths juicy backstories and secrets from the past. Assisting her is a two-person crew — Matthew Abaya and Cody Kulka — and Bay Area psychic June Ahern. A Bay Area paranormal research team chips in and also helps pinpoint the places to visit.

Liu came up with the idea in 2012 while attending the Alameda Fourth of July parade when the Alameda Paranormal Researchers walked by. The light bulb went on, since she needed a film-class project to pursue. Thus, “The Haunted Bay” was born.

It went from a one-off idea to a series with two seasons available for streaming on Amazon Prime. Season 3, which revisits a favorite but scary haunt, drops — appropriately — this Friday, Oct. 30. To view it, visit asianamericanmovies.com or Amazon Prime.

Liu’s interest in the supernatural was piqued when her mother — a horror film lover — died suddenly. Grief-stricken and wanting to know more about the afterlife, Liu sought out the help of psychic Ahern. She was astonished by the intimate details Ahern related to her about her mom and her family.

Today, Liu is not only a Bay Area haunting expert but also a chronicler of the dark, often obscure regional history.

With Halloween peeking around the corner, we asked Liu to pluck from her memory the most interesting paranormal activities she encountered.

Built in 1925, the classic-looking theater drew Liu into it for a show, not “to find anything paranormal.” But the theater — now closed — left quite the impression. “It was just strong, strong,” Liu says. “It was corroborated by other people. We had a screening there and then things were happening to people in the audience. Things were happening to me after the screening; usually we just shoot the video and move on to the next place. No. Things kept happening to us, up to a year, to us and people around us.” (Season 3 reveals that legacy.) http://greatstartheater.org/

2. Defenestration building, formerly on Sixth and Howard in S.F.; torn down in 2017

Once a hotel before it was gutted by fire and, after that, an S.F. fixture, with its fleeing-furniture art installation called “Defenestration,” the space underwent many spirited changes before it was demolished. Before it got razed, Liu heard that the place might be haunted so “we get in there [in 2016], and it’s spooky and scary because it was an abandoned building.” Upstairs, they found chicken poop and dead mice. “It had a horror movie aesthetic,” Liu says. “And when we went with the psychic, she said the place was teeming with ghosts and even darker entities. She saw something rather frightening, maybe a murder victim in one of the halls. We got scared. We were very lucky that we filmed it before it was shut down — sort of memorialized it because we got the inside, we got the outside, we got every corner of that place.”

One of the Bay Area’s most famous haunted sites and “supposedly one of the most haunted ships in America” failed to register much with “The Haunted Bay” crew. “We didn’t catch a whole lot, but the Alameda Paranormal Researchers did because they’re there all the time,” Liu says. “I talked to a famous parapsychologist Loyd Auerbach [who has appeared on ‘The Oprah Winfrey Show’ and ‘The View’] who said the USS Hornet is really special because multiple people have seen apparitions and ghost officers having meetings and people being touched. It’s just full of activity.” Note: There’s a haunted virtual tour of the ship from 7 to 8 p.m. Friday: https://uss-hornet.org/calendar/haunted-hornet-virtual-tour-with-special-guest-dustin-pari-josh-heard

It’s not in the Bay Area, but this Gold Country attraction was unforgettable for “The Haunted Bay” filmmaker. “It’s like a classic horror movie,” Liu says. “It had bats inside. That place was very frightening for me. It was our second time filming, and it seemed like something was going to jump at me, and I moved away without saying anything. And then it jumped at somebody else.” https://prestoncastle.org/

The beloved music hall — now temporarily closed due to COVID-19 — came into Liu’s crosshairs while she was walking in the city in 2017, a drop-in that led to one of the most significant activities witnessed. “The way I found out is that I poked my head in the door and asked them,” Liu says. Once inside, she and a cameraman “felt a pressure coming out of a room. One of the investigators took out a thermal camera, and a face appeared on the camera. We have never seen anything like that before. They even said they didn’t believe it was possible. But the face was close up on the screen, and my cameraman waved his hand in front of the lens, and you could see fingers going up and down behind the head. … That was probably the most mind-blowing paranormal evidence that we’ve seen.” Season 3 revisits it, and the former speakeasy down in the basement. https://www.thewarfieldtheatre.com/

The “gentlemen’s club,” Liu says, had “one of the most bizarre deaths. Apparently, one of the employees was there after hours making love to his girlfriend on the piano. The piano usually comes down from the ceiling. … they somehow kicked the mechanism to make the piano go up. They were so out of it they didn’t notice, and he got crushed to death on top of her. That’s one of the most bizarre deaths in San Francisco history. They have a basement that just goes and goes, and there’s a well down there. That was a very special find.” The Condor Club, too, is temporarily closed.