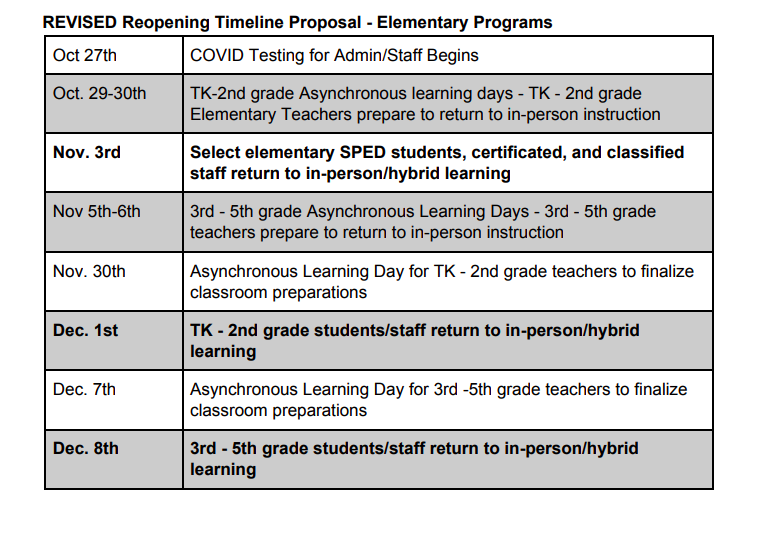 After approving a plan earlier this month to start phasing in special education and elementary students to an in-person hybrid model by Nov. 3, the school board unanimously supported Superintendent Randy Booker’s request for a month’s delay at a special board meeting Monday night.

Booker told the board that the district needed more time to develop its reopening plan due to staffing issues — an unexpected number of teachers requesting to go on leave or resign — as well as time to fine-tune daily health screening and COVID-19 testing protocols for staff. He asked for approval to push the timeline back by a month to Dec. 1 in order to give administrators more time to fill vacancies for the in-person roles, as well as work to finalize the everyday logistics that need to be in place for a return to campuses.

Select elementary SPED students, certificated, and classified staff will be able to return to in-person/hybrid learning on Nov. 3 according to the new schedule.

The abrupt change of plan announced last week started another round of emails from an exhausted and frustrated parent community to an equally weary school board and district administration. Board correspondent Cory Smegal said trustees had received more than 60 emails over the weekend expressing a range of opinions about the new timing and close to 30 parents called in to (mainly) voice concerns about the latest delay.

“Everyone is fatigued. I’m no exception,” Booker said, reflecting on the months of planning and negotiating in an ever-changing COVID environment. “I appreciate people’s passions, frustrations.” He said no other Alameda County district is considering opening before 2021, but he was determined to do so for the social and emotional well-being of students.

In approving the request, and in response to student and parent concerns, board members said they remained concerned about the mental health of students engaged in distance learning only. Several parents who spoke implored the district to speed up the timeline wherever possible in order to start transitioning and testing a return to in-person instruction. Trustees Cory Smegal and Andrea Swenson brought forward a motion — unanimously supported by other board members — to have the district run a trial of bringing back a small number of general education students before Thanksgiving break, details to be determined.

The apparent disconnect between the number of families eager to return for some in-person instruction — according to an elementary school survey, 74% of families who responded were in this category — and the staffing challenges in determining which teachers would be eligible to return to a classroom pose a particularly challenging dilemma for principals who must develop a master schedule that, according to the district memo, minimizes involuntary transfers of staff from one site to another (and across grade levels), and avoids transferring students from one site to another.

In response to a question during public comment, Booker said he expected to need to find a “handful” of new teachers but did not have more specific data. (Edjoin, a job listing site for school districts, currently only shows one listing for an elementary school teacher. It may not yet reflect anticipated openings.)

Under the terms of the MOU between the teacher’s union and the district, teachers are allowed to move into a distance learning assignment “if they or someone in their household, for whom they are the primary caregiver, fall under the CDC’s list of ‘increased’ risk factors,” according to Booker’s memo. (The CDC expanded its list of risk factors to include cancer or cancer survivors, for example.)

Trustee Andrea Swenson applauded the administration’s work thus far under trying circumstances. “We have had no help from Alameda County, the state, or the federal government in figuring a lot of this out. We have had to figure out how to get testing, screening done ourselves.”

“I’m as frustrated as everyone else,” said Board President Amal Smith before the meeting concluded. “Any kind of in-person learning before the long break is important. I recognize the difficulty of working in front of a screen. We don’t forget that students are at the center of what we do. I am deeply appreciative of where we are, and there is still a lot of work ahead of us.”

The next regularly scheduled board meeting is Wednesday, Oct. 28.