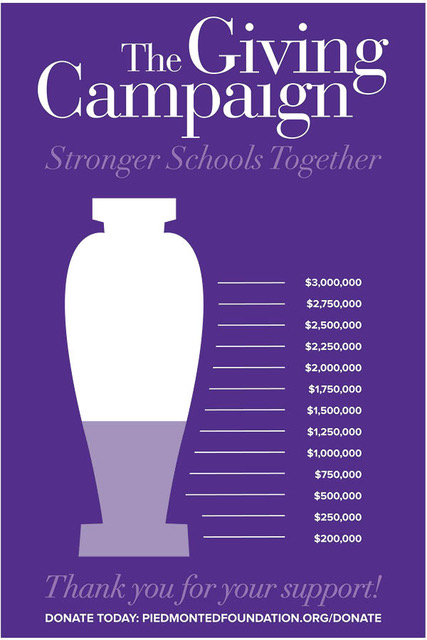 The Piedmont Education Foundation (PEF) has achieved 100% participation from its 21-member Board of Directors and its 55-member Giving Campaign Committee in an unprecedented show of support for the launch of this year’s Giving Campaign, PEF Board Chair Nicki Gilbert shared today.

Together, the contributions from the PEF Board and Giving Campaign Committee have generated $550,000, reflecting the strong philanthropic support of parents, board members, alumni, and community members. The fundraising total comprises gifts and pledge payments received from September 22, 2020, through October 16, 2020.

“The willingness of my fellow board members to lead by example adds tremendous momentum to the Giving Campaign,” Gilbert said. “Our belief is that the Board and Committee’s extraordinary commitment will inspire broad participation by the community in the months ahead.“

“When Teebie, Colleen, and Amelie launched the 2020-2021 campaign, they set an ambitious goal of 100% participation by all parent boards and committee members to be achieved in the first few weeks of the campaign’s launch,” Gilbert said. “They knew it would send a powerful message to others in the Piedmont community. The success we announce today is largely a result of their leadership.”

Giving Campaign funds help to underwrite every aspect of a Piedmont Unified School District (PUSD) education. This year alone, PEF granted over $3 million to PUSD to support essential academic programs throughout the district’s seven schools, representing 7% of the district’s overall budget. PEF supports both ongoing core programs as well as new needs as they emerge, like Chromebooks for each student during distance learning.

“Piedmont’s community support is fundamental to our schools’ success, and I am deeply grateful for everyone’s generosity,” said Co-Chair Colleen Allan. “The engagement of the entire Piedmont community remains vital as we work together to strengthen our schools and move forward with a shared vision for the future.” So far this year the Giving Campaign has raised over $1.2 million.

The Giving Campaign Co-Chairs continue to work toward 100% participation among all Piedmont parents and encourage everyone to make gifts during these critical weeks. To be part of this effort and to learn more about the Giving Campaign and PEF, visit PiedmontEdFoundation.org.