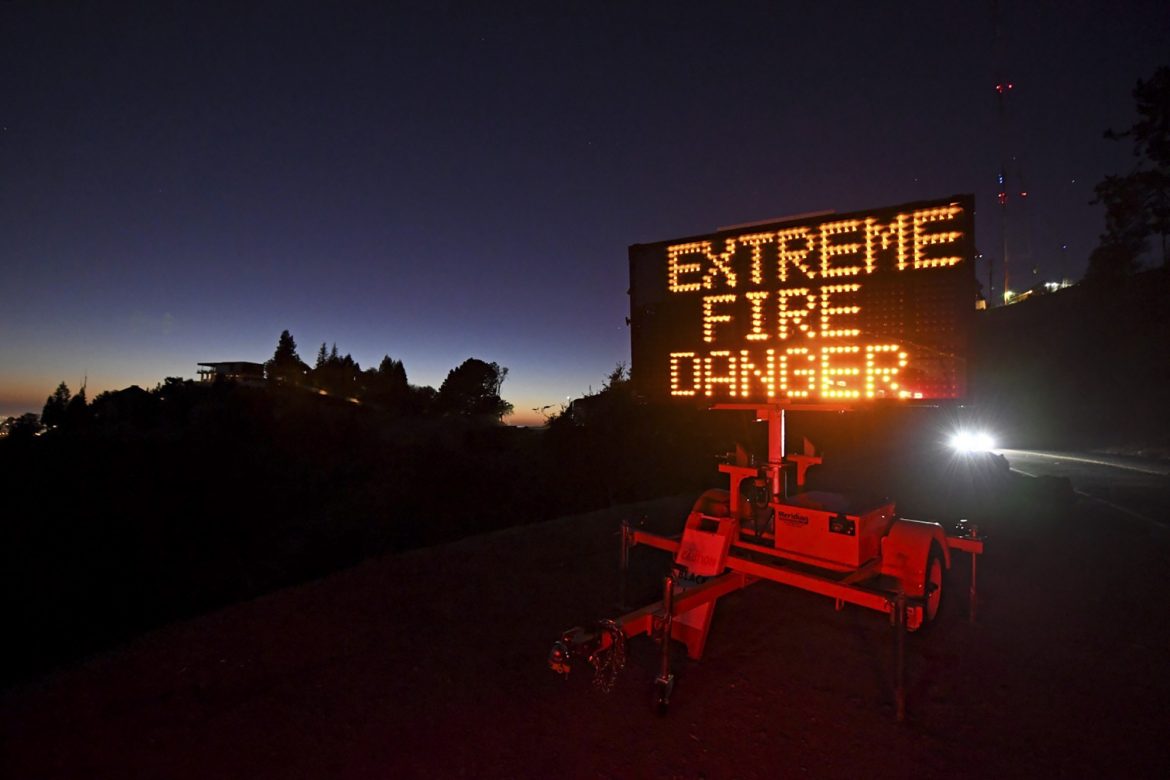 All things considered, California is faring better than expected amid the worst fire conditions of the season.

Though desiccated winds topping 70 miles per hour ignited more than two dozen small fires in the northern part of the state, firefighters had fully contained all but two of them by Monday afternoon, and ongoing fires didn’t spread past existing containment lines. But conditions were more dire in Orange County, where the quick-moving Silverado Fire forced 70,000 Irvine residents to evacuate and critically injured two firefighters, and the Blue Ridge Fire forced 20,000 evacuations in Yorba Linda.

Much of California remains under a red flag warning today — signifying extreme fire danger — though winds are expected to slow down at lower altitudes.

PG&E began restoring power Monday to some of the customers afflicted by the utility’s largest shutoffs of the year, though many likely won’t see their lights come on until late this evening. The shutoffs also disrupted Comcast service for more than 100,000 Bay Area homes and businesses, frustrating parents trying to work from home and kids trying to access online classes.

Meanwhile, around 22,000 Southern California Edison customers lost power, and another 105,000 face potential shutoffs. The utility said Monday night its equipment may have sparked the Silverado Fire.

For many of the 90,000 Californians who abruptly evacuated Monday, it was just the latest traumatic event in a year defined by challenges.

Gov. Gavin Newsom took the unprecedented step Monday of filing a court brief that challenges the state’s application of the death penalty — a year after he declared a moratorium on the practice. In the brief to the state Supreme Court, Newsom’s lawyers argue that California’s “capital punishment scheme is … infected by racism,” pointing out that more than one-third of the 711 inmates on Death Row are Black. To ensure trials aren’t impacted by racial bias, Newsom’s lawyers say jurors should be required to unanimously agree on the death penalty and the facts of “disputed aggravating evidence,” such as a person’s past violent acts.

Also Monday, four district attorneys and two former district attorneys filed a similar brief for the same case — People v. McDaniel — that will soon come before the state Supreme Court. Donte McDaniel was sentenced to death in 2009 for murdering two people and attempting to murder two others.

In yet another indication of the rising anxiety surrounding prolonged distance learning, Sonoma County education leaders are holding an unprecedented “emergency summit” today, the Press Democrat reports. On the agenda: why high school students are failing classes at never-before-seen rates — and the results of a national survey that showed Sonoma County high schoolers are more concerned about their futures than students elsewhere. Around 71% of Sonoma County high schoolers said “feeling anxious about the future” was their No. 1 obstacle to distance learning, while a majority of students elsewhere cited “distractions at home.” The region, recently battered by the Glass Fire, also has one of the state’s highest coronavirus positivity rates — meaning it will be a while before schools are given the green light to reopen.

San Francisco and Alameda counties have cut ties with coronavirus testing sites operated by Verily, a Google sister company, amid concerns about patients’ data privacy and frustration that people from wealthy ZIP codes were flocking to sites intended to boost testing in low-income Black and Latino neighborhoods, California Healthline reports. In order to obtain a test at a Verily site, patients have to sign up through a Gmail account; share sensitive information, including their home address and health conditions; and agree to a privacy policy permitting that data to be shared with third parties. Many low-income residents were suspicious of the requirements, and some lacked the internet access necessary to sign up.