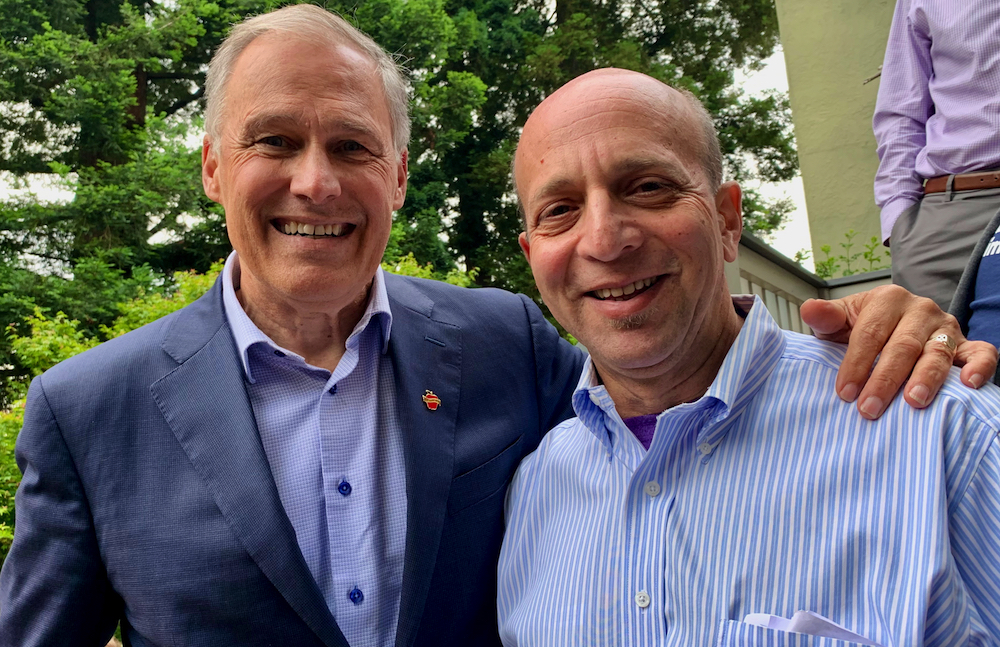 Piedmont resident Steve Schiller has 30 years of domestic and international experience in the energy and environmental sectors and served as a member of the city’s Climate Action Task Force in 2018. More recently, he’s been co-leading groups fundraising for climate-focused candidates at state and federal levels. For example, he hosted a fundraiser at his home for Washington Gov. Jay Inslee when he was running for president as well as virtual events for Joe Biden, candidates for House and Senate seats, state legislative candidates, and a group led by Eric Holder addressing voter suppression and gerrymandering.

Piedmont Connect recently interviewed Steve about his personal and professional actions on climate change and the single most important thing he believes we can do to address this crisis. The following are excerpts from that interview.

Last week was National Drive Electric Week, and you were recently featured in a YouTube interview with Piedmont city staff about driving a Chevy Bolt. Why do you drive an electric car?

Certainly what motivated us is trying to lower our environmental footprint. But the other reason that anybody gets a car is to meet their needs. We needed a commuter car. The Bolt, which is 100% electric, is a great commuter car and can also get me to and back from Sacramento with one charge.

It’s quite quick and peppy. It handles well and is comfortable. There is essentially no maintenance. It’s very practical, and it’s actually really fun to drive.

What do you think about the proposal for electric vehicle charging stations in Piedmont?

It’s a great idea. In California, around 28% of greenhouse gas emissions come from passenger vehicles. So passenger vehicles are a really big deal, and we basically need to get rid of gasoline as a primary fuel. Any strategy for decarbonizing transportation requires infrastructure.

The term of art is “market transformation.” You need to do projects to drive early adoption and experiment with what moves the needle so that it becomes common practice. Piedmont is a good community to do that.

The real users I see of these EV chargers are the people working in town – schoolteachers, firefighters, police.  Some police departments, by the way, have started using all electric police cars for patrolling.

What do you think of the city’s proposal for Reach Codes – basically updating building codes to transition from natural gas to clean electricity?

I’m absolutely supportive of this. When we build new buildings in this state, they are very energy efficient. We have excellent building codes in California, but that’s new construction.

With Piedmont’s proposed Reach Codes, when you do remodeling, you would bring buildings up to a higher level of efficiency that is within reason and economically viable.

I’m on a decarbonization coalition for the state called the Building Decarbonization Coalition. In my work on climate, when you do the basic numbers, it becomes so obvious so quickly that we need to decarbonize the economy. It starts with the electricity sector, which we’re doing, and the built environment. It’s a massive effort, and it’s going to take investment up front, but those investments will pay off, big time.

The thing Piedmont can do is drive early adoption. When a water heater goes out, put in a heat pump water heater. I love cooking with natural gas, but you can do that with an induction stove.  We almost had our house burn down because one of our foster dogs jumped on the stove and turned on the gas. Stoves can be dangerous for kids, and they’re also a significant source of indoor pollutants.

What else do you think needs to be done at the state and federal level to address climate change?

The most important thing is help get Trump and his enablers out of office. That is not a joke. It is fundamental. Why? Two reasons.

I used to do a lot of international work and there is really just one major political party in the world that denies the existence of climate change, let alone humans’ role in a changing climate. Of course there is debate about what to do about it, but you need to acknowledge there is a problem first and then you can have debates on how to address it, not if we should address it.

On the specifics, the Trump administration is just knocking down environmental regulations left and right, destroying a belief in science for a large portion of the American public, and simply skipping the moral responsibility of leadership for the collective, not just the individual, good. They’ve even knocked down mercury rules, which affects children! He’s put in very dangerous people who are ruining our future.

I used to be one of those people who said we can work with everybody. But no longer. As, Jay Inslee said in the presidential debate, “The existential threat is Donald Trump.”

So a big part of my time is spent on avoiding waking up some morning a month from now wondering if I should have, could have done more to address this existential threat.