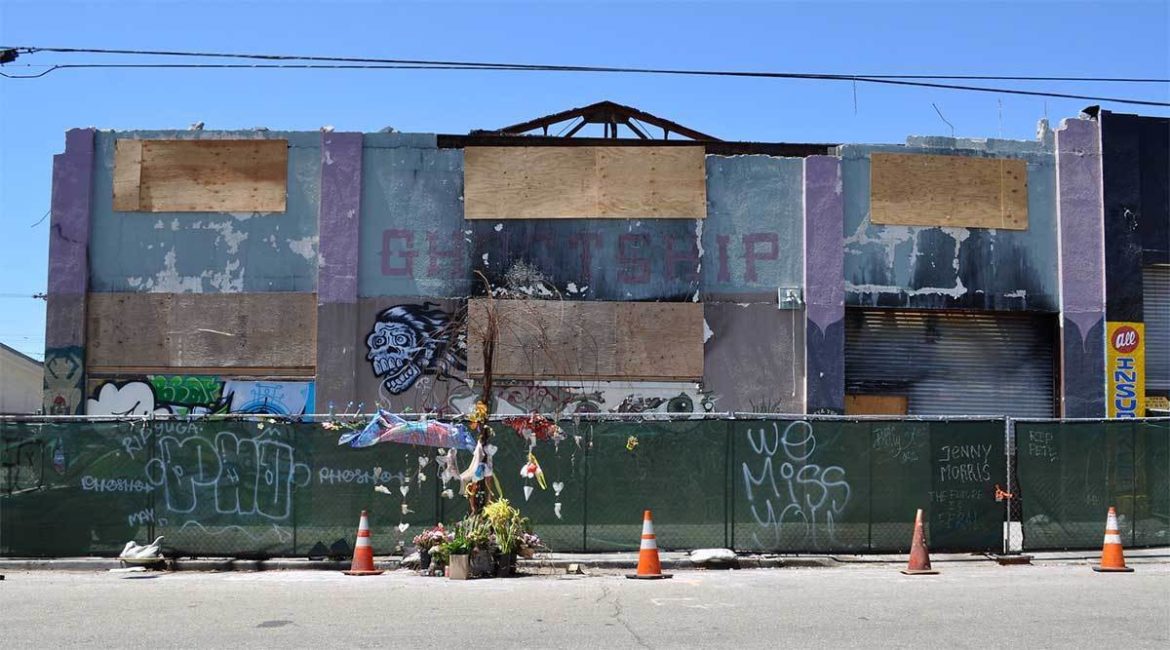 Tributes line the fence outside the burned Ghost Ship warehouse in Oakland in May 2017. A city audit found that the fire department has "been slow to learn from the past" in making changes to inspection practices following the deadly 2016 blaze. (Photo by Sharon Hahn Darlin/Flickr)

The fire department has made just limited progress on recommended reforms nearly four years after the Ghost Ship fire killed 36 people at a warehouse in Oakland, according to a report released Wednesday by the city auditor.

The report looks at whether the fire department’s Fire Prevention Bureau implemented the recommendations from a mayoral task force following the December 2016 fire and whether controls are in place to make sure state-mandated inspections are done and fire safety laws are enforced.

“Unfortunately, the audit found that OFD has been slow to learn from the past and critical works remains to be done,” city auditor Courtney Ruby said in a statement.

“A sense of urgency and accountability must be ignited in OFD,” Ruby said. “There is no excuse for the lack of progress.”

Ruby’s office said that the city has made only limited progress on the task force’s recommendations. A spokesperson for the fire department did not respond to a request for comment.

While the fire department has put in place processes to find and address properties at risk and improve communication so that unsafe properties can be reported and investigated, it has failed to put in place organizational improvements, the report says.

According to the report, the fire prevention bureau inspected just 26 percent of all facilities required by the state from September 2018 to September 2019.

It had inspected just 49 percent of state-required facilities in the last three years that the auditor’s team reviewed. In addition, the bureau does not have enough staff to inspect the increasing number of Oakland’s cannabis businesses, which pose a high fire risk.

The practice of the bureau has been to try to coax property owners to remedy violations and then re-inspecting properties.

Of the more than 800 inspections the bureau conducted from September 2018 to September 2019, 236 property owners corrected their violations while violations went uncorrected at 493 properties even though they were inspected up to seven times, the auditor’s office said.

Also, the fire prevention bureau has not put into operation an appeals process to allow property owners to dispute violations in the city’s wildlife interface areas. That caused delays in assessing about $300,000 in inspection fees over a two-year period.

Fire prevention bureau staff have been stretched thin because of the city’s building boom, from dealing with issues at homeless encampments and hiring and training new staff for inspections.

Also, the lack of progress has also been hampered by the high turnover in the fire department’s leadership.

But seven years ago, an audit of the fire department’s vegetation management practices showed problems that now persist with respect to building inspections.

The city is not alone in its failures. The Oakland Unified School District has not been responsive to needed corrections to fire safety violations, the report says.

“We are ready to ensure they are able to complete these inspections, and we are prepared to make any necessary corrections,” Sasaki said.

Fire officials have agreed to take 29 of the 30 recommendations in the audit and the mayor and city administrator are even more supportive.

“The Mayor and City Administrator support all of the recommendations in the Auditor’s report and have already begun to implement many of them to build a robust, efficient, and accountable fire prevention bureau that ensures the safety of our residents,” Justin Berton, spokesman for Mayor Libby Schaaf said.

A year from now Ruby and her team will revisit the audit to see what if anything has been implemented.

I’m the people’s eyes and ears inside City Hall,” Ruby said. “We have to make sure the city is doing all it can to protect our residents.”