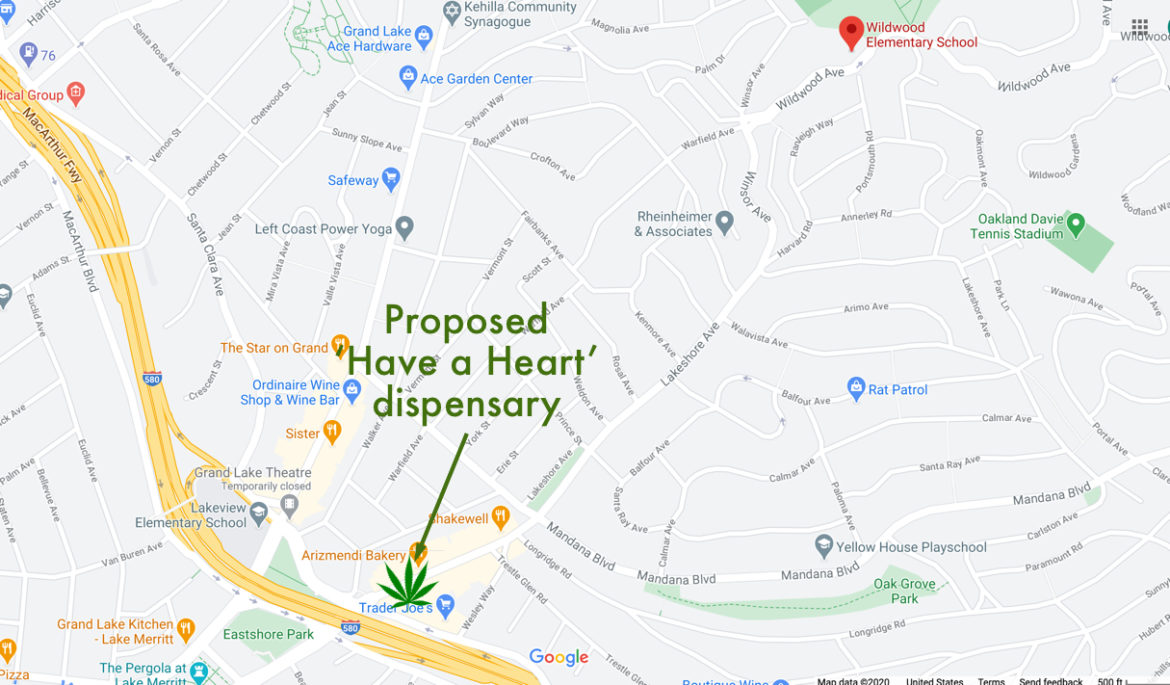 The city of Oakland held an online hearing on October 5 to take public comment on a proposed cannabis dispensary on Lakeshore Avenue.

Joshua Chase, who owns the Have a Heart dispensary downtown at 7th and Broadway wants to open a second location in a former CVS location at 3238 Lakeshore. The location is next to a Union 76 gas station and a Trader Joe’s market.

Chase was born in San Francisco and grew up in Oakland and was a baseball player at Skyline High School. He played two years of college ball at Santa Clara University before earning an economics degree. He was involved in the cannabis industry in Washington state before returning home.

Have a Heart on Broadway opened September 28, 2019. Chase claimed $15 million in revenue during the hearing.

He said his new location would be an improvement to the neighborhood, noting that homeless people often use the doorway to the vacated property to relieve themselves. He also stressed that he hires local people to work at his current dispensary and many of them are formerly incarcerated, an effort to reverse the damage of the war on drugs.

Chase said his current location has had no robberies, no incidents of violence against staff and maintains strong relations with the Oakland Police Department.

Public comment was split. Many neighbors pointed out that Lakeview Elementary School is not far from the location, although Chase’s application is not in violation of state restrictions. The school is 0.3 miles from the location according to Google, and moreover it closed its doors to students in 2012. Nonetheless, many said having a pot club in an area frequented by families strolling and shopping with children was unacceptable.

“This is not something that really should be there,” Valerie Abad said. “I don’t think this is an appropriate location.”

Added Eve Stewart, “I don’t see how this adds anything to the neighborhood. It’s a very viable area. I don’t think its lacking in economic activity.”

Questions were also raised about the adjacent parking lot and whether people would be driving to the outlet. Car breakins were mentioned as well. A common fear was that customers would step outside and smoke the product immediately. Chase answered that it’s illegal to do so and said he would have a security guard onsite when the dispensary was open and several security cameras.

Support came from multiple residents as well as several people involved in the cannabis industry.

Resident Jenny Sar said, “We should be normalizing cannabis. … His industry is a large industry and it brings in a lot of money but it is not to one of those large corporations.”

Evan Haarz works in the industry and lives in the neighborhood.

“I think that despite some concerns, this is the ideal place to bring cannabis,” he said. “It is not only a family area, but it’s an entertainment area. There are bars.”

Added Christina Bullard, who also is in the industry, “It is important to have safe cannabis locations that can get medicine into the hands of patients in need.”

This hearing was for a Cannabis Dispensary Permit. The city will rule on the permit application within 30 days, said Greg Minor, Assistant to the City Administrator. Then, Chase will have to go through the regular permitting process – applying for building permits and the like. Anybody who wants to be notified when the permit decision happens should email either Minor (gminor@oaklandca.gov) or Nancy Marcus (nmarcus@oaklandca.gov).