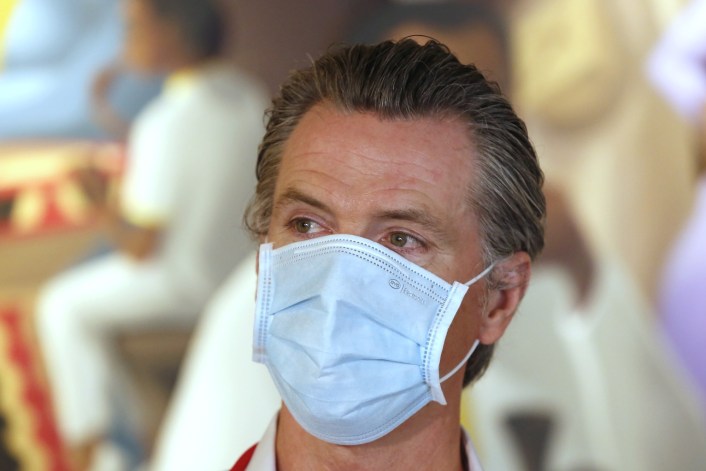 Gov. Gavin Newsom met a self-imposed Nov. 1 deadline to expand California’s daily COVID-19 testing by opening a new laboratory in Santa Clarita on Friday. The governor said he expects the lab will soon begin to process 40,000 tests a day and eventually ramp up to 150,000 — doubling the state’s capacity.

California’s decision to build its own $25 million state-of-the-art lab was in response to the lack of federal action around testing.

Newsom first announced a $1.4 billion deal with Massachusetts-based diagnostics company PerkinElmer two months ago. The relationship isn’t new. The state has worked with the company for many years to conduct newborn screenings.

The new lab is expected to increase California’s capacity by 150,000 tests a day by March. That would more than double the 120,000-plus tests currently conducted daily. To date, the state has administered more than 18 million tests. Results are expected within 24 to 48 hours.

Dr. Mark Ghaly, the state’s health and human services secretary, said this effort will bring much needed testing to harder hit areas, including communities of color and rural areas.

“This represents an opportunity to get one of the key tools to reducing transmission in those areas where we know transmission goes from 0 to 60 miles per hour in the blink of an eye,” Ghaly said.

The PerkinElmer deal is also supposed to help reduce costs, cutting what the state pays per test from about $150 to $30.78, once operating at full capacity.

Testing has been one of the biggest hurdles for California, especially early in the pandemic. With testing supplies short from the get-go, it was months before the Golden State could process 100,000 tests a day. Even then, it was still not enough to help suppress the virus in a state of this size, according to experts.

Over summer, people also reported waiting weeks for their test results. Since then, wait times have seemingly improved. The state Department of Public Health reports 91% of people tested receive results within two days.

Testing capacity is especially important as the state enters flu season, when more people are likely to feel symptoms and seek out a COVID-19 test. State officials said new technology allows for testing both COVID-19 and the flu. Earlier this week, Solano County reported the first case of co-infection.

“This lab is happening at the right time,” Newsom said about people gathering indoors for the winter holidays.

Newsom touted the speed in getting the lab up and running. He said a lab of this scale usually takes three years to complete, but his staff got it up in eight weeks. According to the governor’s office, the facility is also creating 700 new jobs.