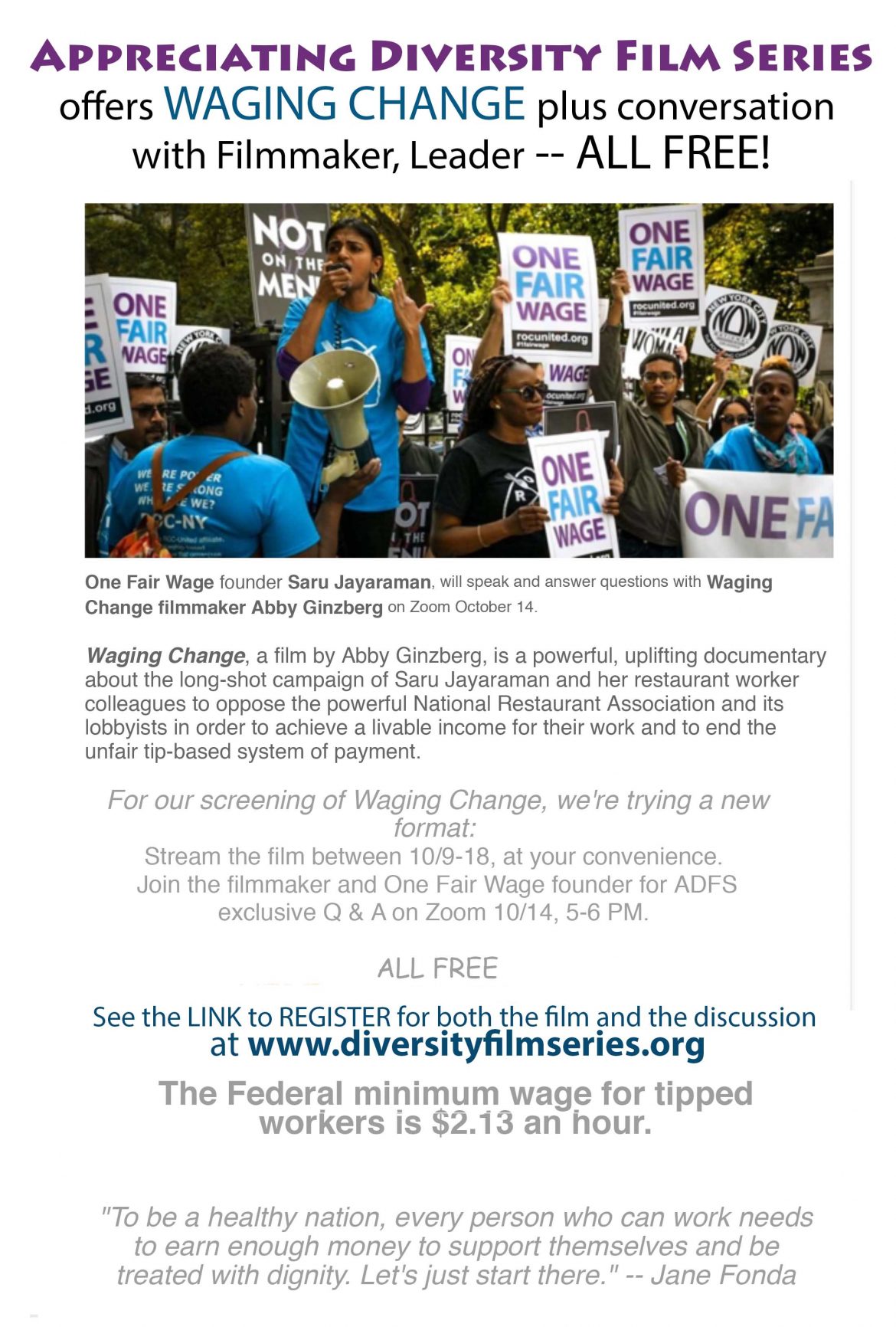 The film will be shown online on Wednesday, October 14, from 4:00-5:00 p.m., with a post-film discussion from 5 – 6 p.m. with Saru Jayarman, leader of the One Fair Wage movement, and Abby Ginzberg, filmmaker.

Waging Change, completed just before the coronavirus hit, shines a light on the difficulties faced by restaurant servers and bartenders.  The majority of people who serve food in the U.S.  restaurants are paid a federal sub-minimum wage of only $2.13 an hour and are forced to depend on tips to feed themselves and their families. Women, who hold two-thirds of all tip-based jobs, are especially affected. Their reliance on tips can lead to pervasive gender discrimination, sexual assault, and sexual harassment at the hands of customers, co-workers, and bosses-and can leave them with little ability to speak up.

Watch history in the making as labor lawyer and activist Saru Jayaraman and her energized worker colleagues begin their fascinating, long shot campaign to obtain a living wage in restaurants and other workplaces that employ tipped workers. This documentary shows how the restaurant industry can take cruel advantage of its employees and how they are rising up to demand fair wages and treatment. See the efforts of thousands of restaurant workers across the country to demand respect and one fair wage.

Witness proof that modern grassroots movements have an impact to make workers’ lives more fair and to protect women from on the job harassment. As huge numbers of restaurant workers are laid off in the face of the pandemic, Waging Change provides a behind the scenes look at what needs to change so that restaurant workers can receive respect and a fair wage.

The Film’s Peabody award winning director Abby Ginzberg told the SF Weekly that her hope for the documentary is that it will raise consciousness among restaurant goers and that it will be used as an educational and advocacy tool as part of campaigns seeking to improve the lives of service workers. Jane Fonda, Lily Tomlin, and Alexandria Ocasio-Cortez appear in support of the workers. Nominated for various upcoming awards, this compelling and ultimately uplifting film points the way toward decent treatment and fair compensation for the workers we encounter everyday .

The coronavirus epidemic has revealed the extreme challenges confronted by both these tipped workers and by restaurants. At a moment of historic pressure on American workers, these individuals are fighting back against politicians and industry lobbyists, taking on an effort that is changing workers’ lives and our economy. Waging Change helps all consumers see the important role they have to play in ending this two-tiered wage system. (California is one of seven states that has instituted an increasing minimum wage structure that does not depend on tips).”