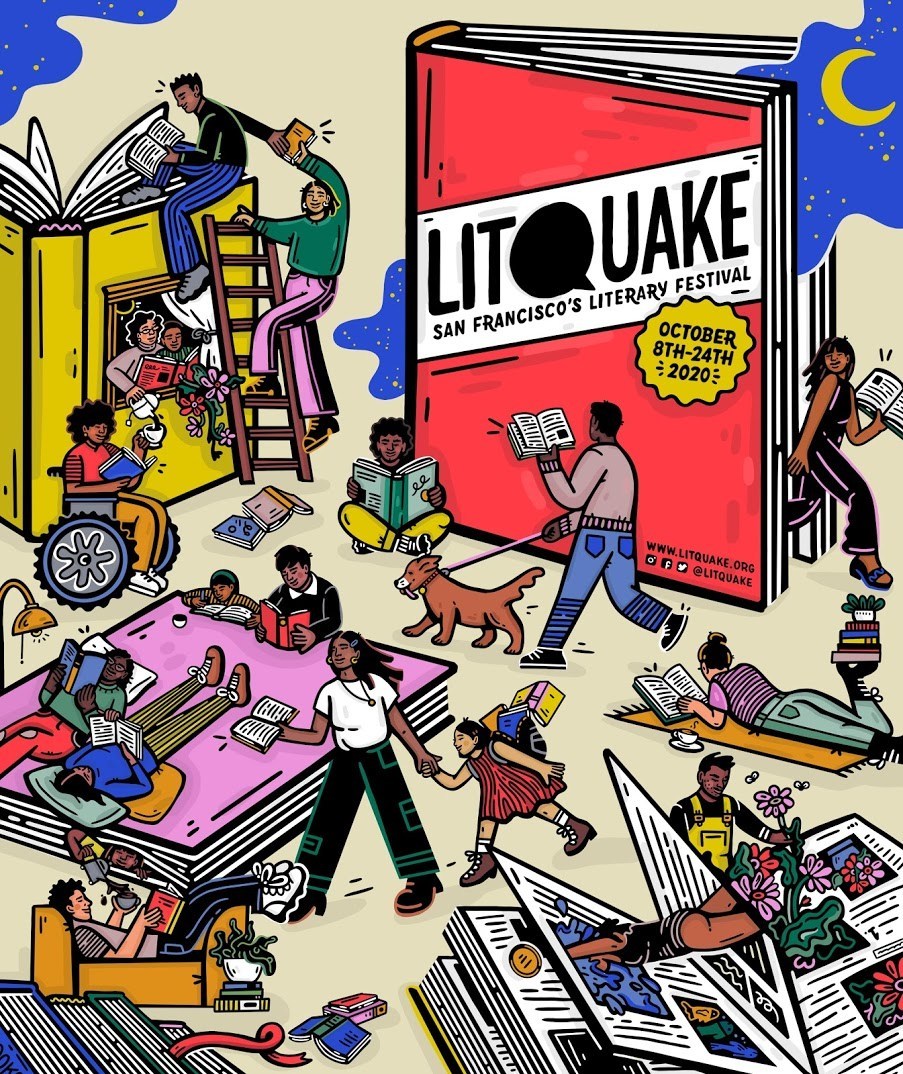 Thumbing its nose at the pandemic, that cheeky annual booklovers blowout known as Litquake is back in the Bay Area for 2020, entering its third decade with an expanded version that takes full advantage of what the digital era has to offer.

Now running a full slate of authors over 16 days instead of the traditional 10, Litquake rumbles into virtual high gear at 7 p.m. Oct. 8 with a “Sex and Vanity” session featuring Bay Area author Amy Tan in conversation with “Crazy Rich Asians” author Kevin Kwan about his new novel, which bears the S&V title and revolves around a young woman caught between suitors, one a privileged WASP and the other – not nearly so desirable to her social-climbing family.

Also expanded this year is the ancillary Kidquake festival, co-sponsored by the San Francisco Public Library to bring in multiple authors and illustrators for the K-to-Grade 5 set. Teachers sign their students up for Zoom links to the live sessions, which will also be recorded for later free access. Participation is expected to triple this year, with some 3,000 young students served.

Some highlights of the events for grownups include the 7 p.m. session on Oct. 9, a conversation with novelist Perrotta, author of “The Leftovers” and “Little Children.” But thetopic for the evening, in this highly political year, will be his second novel, 1998’s “Election,” which was made into the hit movie starring Reese Witherspoon and Matthew Broderick.

Those who sign up are encouraged to watch the flick first, and a link to its airing on Amazon Prime is provided on the site.

Another event with a timely topic takes place at noon Oct. 10 with Bay Area author and attorney Adam Smyer moderating a “Debut Authors: Making a Splash During the Apocalypse” session with social justice activist Mia Birdsong, novelist Carole Stivers, YA novelist Phil Stamper, memoirist Sejah Shah and middle-grade author Danielle Svetcov about how they are marketing their latest efforts. Stivers, a Ph.D. biochemist, has a leg up already. Her sci-fi thriller “The Mother Code” has been optioned for a movie by Steven Spielberg. Moderator Smyer may prove to be an entertaining and enlightening presence; a self-described “martial artist and mediocre bass player,” he has just published his second book, “You Can Keep That to Yourself: A Comprehensive List of What Not to Say to Black People, for Well-Intentioned People of Pallor.”

Political correspondent for Time magazine Molly Ball will be online at 5 p.m. Oct. 12, talking with KQED political editor Scott Shafer about “Pelosi,” her recently released biography of the House Speaker who drives President Trump into frequent and fitful Tweet storms. And Bay Area authors Lysley Tenorio and Daniel “Lemony Snicket” Handler will be in conversation at 7 p.m. Oct. 16 about Tenorio’s new, highly acclaimed novel, “The Son of Good Fortune.”

Litquake would not be Litquake without its wildly popular, alcohol-infused closing event, the Litcrawl, finally fully appropriate now that the festival has hit the legal age of 21. And although participants will not be able to stumble in and out of the usual assortment of brick-and-mortar bars and pubs, they are invited to liquor up at home, if they wish, for a daylong series of events on Oct. 24 that will again be broadcast in conjunction with several copycat Litcrawls in other cities, including Boston, Los Angeles, Seattle and even Angers in France.

Humor, not surprisingly, appears to be a rampant theme. At 6:15 p.m., the Moxie Road company will present “The Hand Sanitizer’s Tale,” a half-hour session with a wink and a nod to Margaret Atwood that will feature a half-dozen authors reading excerpts from their favorite dystopian novels. And a 7 to 7:30 p.m. event titled “The Wonderful Wizard of Ahhs” will set off a wacky literary relay race in which 14 writers will invite us to follow the orange brick road, as they re-envision for our mondo bizarro times the L. Frank Baum classic, each in his or her own inimitable style, passing off the literary baton from one to the other in mid-sentence.

Litquake events are on Zoom with some concurrent postings on Facebook. With a few exceptions, most are completely free; some are free with suggested donations of $5 to $10. Find out more and sign up at www.litquake.org.