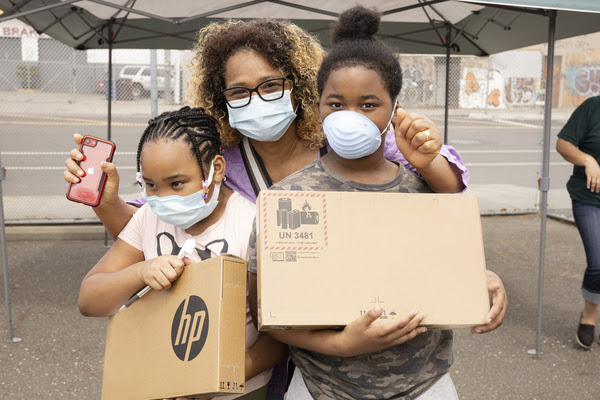 Deep into the pandemic, some districts are finding an alarming percentage of students are missing from the virtual classroom — with the worst absentee rates occurring among homeless students, foster youth, English learners, Black students and high school seniors.

Now some districts, such as West Contra Costa and Oakland Unified in the San Francisco Bay Area, are scrambling to find ways to track down and re-engage students and provide them with the support they need to complete their coursework.

“I’m concerned about students in grades 9 to 12 and foster youth,” said Oakland Unified board member Gary Yee at a recent board meeting. He noted that only about 83% of high school students overall are showing up to classes and the lowest rates are for high school-age foster youth, at 69%. “I wonder if it’s possible for us to be assured we know who they are, why they’re absent, and whether the reasons are beyond our scope to deal with.”

California is requiring districts to track students’ daily participation in distance learning and to outline strategies for reaching students. But, as yet, no statewide data are available that shows how engaged students are this school year.

West Contra Costa Superintendent Matthew Duffy said the district is keeping a close eye on absences among students who are not fluent in English, since English learners had high absentee rates last year. The district is also concerned that its homeless student population may have grown due to families struggling to pay rent. And it has logged about 1,000 absences from students without required immunizations.

Experts point to a host of reasons for increased student absentee rates during distance learning, including a lack of access to technology, no adult supervision or safe places to work at home, as well as language barriers and other hardships.

Both Oakland and West Contra Costa track attendance based on student participation in online lessons, as well as work turned in online. They have implemented plans for following up on absences that include calls, emails and letters home to families, as well as other outreach and support that intensifies the longer students are absent.

Castlemont High in Oakland reached out to 120 students, many of them from Guatemala, who didn’t enroll or didn’t fill out a technology survey. They hired a translator who spoke Mam, the Mayan language spoken by many Guatemalans, and visited the homes of students for whom they had addresses, but no phone numbers. These efforts helped enroll more students and get them the technology they needed, said Preston Thomas, the district’s chief systems and services officer.

“Although we are not yet where we need to be,” she said, “there are many people working across the district for students and families.”

Both districts are building community partnerships to offer “learning hubs” on non-school sites such as the city’s DeFremery Recreation Center in West Oakland, where high-needs students can participate in remote learning in environments that comply with state safety guidelines. These do not replace district instruction, but they provide a safe place with Wi-Fi. Students can use Chromebooks issued by the district or distributed citywide through the Oakland Undivided campaign to log into their classes and complete their work, with additional academic, social and emotional support. Oakland Undivided is a citywide campaign that has raised millions of dollars to provide a device and internet access to every low-income student in the city who needs them.

“There are students and families for whom distance learning simply is not working,” Johnson-Trammell said in a recent message to the community. “For these families, distance learning has imposed an intense and sometimes devastating hardship on them. That is why I believe that we have a moral obligation to investigate every option available to us to provide in-person instruction aligned with state and county educational guidelines and public safety guidance.”

A recent EdSource poll found many parents worry that continuing distance learning for the entire school year will result in learning loss for all students, especially those who are most economically vulnerable.

“Demand is far greater than our capacity,” said Curtiss Sarikey, the district’s chief of staff. He said more hubs are expected to open in the next month for students based on low attendance or other issues. One high school principal, he said, referred four students who were suicidal and maintained contact with school staff, but were not living with their parents.

“It’s really heart-rending to hear what our students are facing,” Sarikey said during a recent board meeting, adding that students need connections to caring adults who can help them get back on track with their learning.

West Contra Costa Unified is turning to Contra Costa County to help identify organizations willing to host learning hubs and find out whether they need financial support, internet improvements or other upgrades the district could provide, Duffy said.

“This is slow-going, to be frank, because those organizations have to figure out their own safety plans and employment situations,” he said, alluding to Covid-19 concerns.

Schools in Alameda and Contra Costa counties can reopen for in-person instruction, based on the state’s Covid-19 tracking system, since neither are in the most restrictive purple tier. They don’t plan to open soon. However, learning hubs can open before the districts because they are considered a form of child care or after-school programming that is not district-run.

Both districts are also using money from the state and federal government aimed at helping to deal with the challenges of Covid-19, including learning loss, to expand family outreach, student support and teacher training.

Oakland Unified is paying stipends to teachers who spend extra time as “equity family navigators,” who connect with families about academic issues and coordinate with counselors and social workers to find and support missing students. It has also created a “Family Central” website with information about curriculum, technology, free meals, healthcare and district updates. West Contra Costa has created a “digital backpack” website with family resources and is offering a “parent hour” on Fridays, giving parents the opportunity to directly connect with their children’s teachers, as well as parent training in distance learning.

The districts have also increased tech distribution and support. Besides partnering with the city and nonprofit Oakland Public Education Fund to distribute free Chromebooks and Wi-Fi hotspots to low-income students through the citywide Oakland Undivided campaign, Oakland Unified is also paying stipends to teachers to provide tech support.

West Contra Costa purchased and distributed about 4,000 hotspots and Chromebooks and devices for all preschool through 1st grade students for distance learning.

The districts are partnering with outside agencies to provide help to homeless and foster youth. They have also expanded free meal distribution for students at schools, and Oakland Unified is piloting meal delivery to some families.

Improved translation services include Arabic and Mam translators in Oakland Unified, along with new communications technology that translates messages to families, as well as bilingual tutors in West Contra Costa Unified.

To motivate low-income 12th-graders at risk of not graduating to complete “milestones connected to their graduation,” Oakland Unified is considering offering financial “incentives” of up to $1,000 each. But Chief Academic Officer Sondra Aguilera said details for this proposal have not yet been finalized.

“When a kid misses school, our biases can influence how we treat that absence,” said Hedy Chang, executive director of Attendance Works, a national and state initiative that works with districts to improve student attendance. “Do we say: ‘That’s a challenge we ought to help the kid overcome,’ or do we say: ‘How come that kid doesn’t care about school’ and blame the family? We have to shift to a more positive problem-solving approach.”