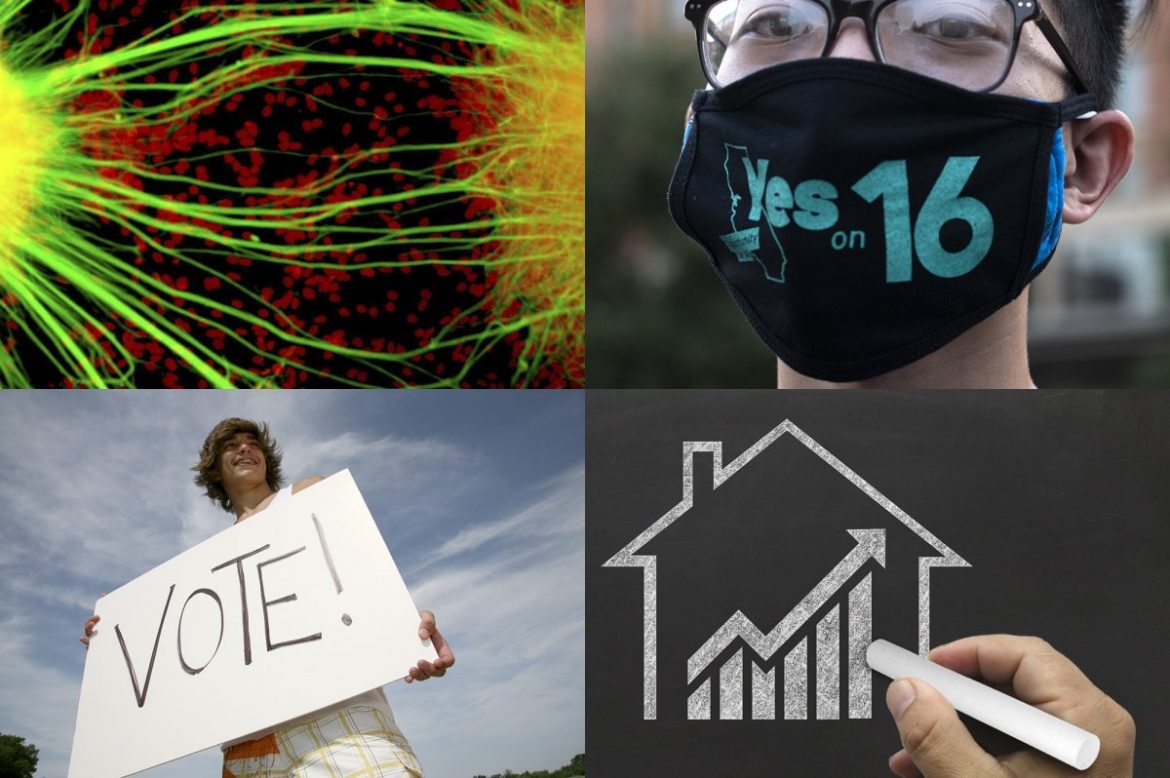 Hundreds of thousands of college and university students are among the Californians expected to cast votes between now and November 3. The number of 18- to 24-year-olds registered to vote in California has climbed by 24% since the last presidential election, and students are finding creative ways to inspire their peers to vote amid the coronavirus pandemic. Here’s a rundown of the ballot propositions most likely to impact higher education, students and other young people. (For more about all of this year’s ballot propositions, check out CalMatters’ 2020 Election Guide.)

Student activism was a driving force behind Prop. 16, which would once again allow public colleges to consider race, gender, ethnicity, and national origin in admissions and hiring decisions. California voters passed a constitutional amendment banning the practice, Prop. 209, in 1996.

Enrollment of Black, Latino and Native American students dropped by 25% at UC Berkeley in the wake of the affirmative action ban, and by an average of 12% across the University of California system, according to the university.

While numbers have rebounded somewhat since, those groups are still underrepresented at UC compared with their share of California’s population, a fact cited by student advocates who lobbied Assemblymember Shirley Weber to sponsor a resolution placing affirmative action back on the ballot. It passed the Legislature this summer in the wake of nationwide protests over racial justice.

“We’re experiencing a civil rights movement again,” said Kyndall Dowell, who helped lead the push for Prop. 16 as vice-chair of the UC Student Association’s Racial Justice Now campaign. “This is the age and decade of having to address colorblindness and the false narratives of racism not existing and people having equal opportunity.”

UC’s board of regents also supported putting Prop. 16 on the ballot, and the governing boards of California State University and the California Community Colleges have endorsed it. Opposition includes the California College Republicans and Students for Fair Admissions, who sued Harvard over affirmative action admissions policies in 2014, arguing that the university was discriminating against Asian-American students.

“California College Republicans is against Democrats’ push to allow discrimination on the basis of race, sex, color, ethnicity, or national origin in public employment, public education, and public contracting,” said the organization’s communications director, Dylan Martin. “The Republican Party has been against this discrimination historically, as it was Republicans that championed Prop. 209 in 1996.”

U.S. Supreme Court cases have already limited the scope of the use of race in college admissions. Racial quotas, for example, are illegal. But a repeal of Prop. 209 could free up universities for more targeted outreach to diversify the pool of applicants, said OiYan Poon, a professor at Colorado State University who studies affirmative action.

Having trouble making the rent for your off-campus room? You’re not alone. The lack of affordable housing near campus was a major motivation behind this spring’s wildcat strike of University of California graduate students. UC teaching assistants earn an average of $21,000 a year and were pushing for a cost of living adjustment.

“Because of our low wages, the rental markets that we’re forced to live in create a situation where student workers are being priced out of neighborhood after neighborhood,” said Ethan Hill, a UCLA doctoral student and organizer with the graduate student union, United Auto Workers Local 2865.

Just how to solve California’s affordable housing crisis is the question behind Prop. 21. Current law only allows local governments to limit rent increases on properties built before 1995. Prop. 21 would also allow rent control on a wider range of properties, including those older than 15 years for landlords who own multiple buildings. While current law allows landlords to increase rent to market price after a tenant moves out, Prop. 21 would allow increases of only up to 15%.

Landlords and some affordable housing advocates say Californians’ housing woes stem from an undersupply of housing, which they say Prop. 21 would exacerbate. And they point out that the state already passed a law this year to cap rent increases at about 8%.

“Our true problem in California is the lack of affordable housing.  Proposition 21 does nothing to address this issue and lacks a ‘means test’ for acquiring a rent controlled unit, meaning even rich tenants will experience the benefits of rent control and, in fact, will be the first prospective tenants to gain access to the limited number of housing units at turnover, further making it harder for tenants of limited means to find housing,” said Debra Carlton, vice president of state public affairs at the California Apartment Association.

But rent control can be effective at improving stability of neighborhoods and affordability for long term residents, said Mark Treskon, a senior research associate at the Urban Institute. Treskon said rent control is “most effective as a suite of policies that include more housing for growing communities.”

If Prop. 21 passes, Hill said, UAW 2865 members plan to organize locally to support the implementation of rent control in college neighborhoods. “Both students and workers at California university campuses make up a really large percentage of the residents of those municipalities in which campuses are located,” he said. “So we are in a position to really move local law and organize to vote in politicians who represent our politics and who are willing to go to bat for us to fight for affordable housing.”

Prop. 18 will allow 17-year-olds who will be 18 at the time of the general election to vote in the state primary and special elections. Eighteen states have similar measures in place, according to the National Conference of State Legislatures.

Supporters argue that this will allow young people to vote on important matters that directly affect them. Some studies have shown that people who vote from a young age are more likely to continue voting and that 17-year-olds score as well on civic knowledge as voters in their early 20s.

“Young people are directly affected by issues like employment initiatives, affordable housing and education funding,” state Assemblymember Kevin Mullin, the measure’s author, said in a press release. “They have what I would call ‘skin in the game’ on these and other issues and I believe we should be looking for ways to amplify their voices.”

In opposition to the proposition, the Elections Integrity Project told the Legislature that “17-year-olds are legal minors. Under that definition, they are still considered children. They are almost all still living at home and under the strong influence of their parents. This is not conducive to independent thought and voting without undue pressure from their immediate superiors.”

But young people don’t blindly follow their parents’ beliefs, said Tyler Okeke, a youth advocate for Power California, which has supported measures to lower the voting age to 16 in the Bay Area and Los Angeles.

“We’re a generation that is very skeptical of what is being forced down our throats,” he said. “We all have to think for ourselves. And usually we go contrary to what we’re being told because we just have a record of being lied to.”

California’s community colleges could see a windfall if Prop. 15 passes. Like Prop. 16, it’s a flashback to an earlier time in the state’s political history — in this case, 1978, when voters passed Proposition 13, which let landowners  pay taxes based on a property’s original purchase price instead of its market value. Prop. 13 dramatically shrank the funding base for public schools and community colleges. Prop. 15 would expand that base again by assessing property tax based on market value for businesses that own California property worth more than $3 million. Homeowners will get to keep their tax breaks.

The tax change could generate up to $4.6 billion in new funding for K-12 schools and community colleges, the state Legislative Analyst’s Office estimates. (Local governments, which collect property taxes, would decide how to spend the rest of the funds.)

“Improving educational attainment in California is not only a moral imperative, but also an economic one for both the students who stand to gain from quality, affordable higher educational opportunity as well as for the state as a whole,” Debbie Cochrane, executive vice president for The Institute for College Access & Success, said in a statement. “The passage of Proposition 15 would provide our state’s schools and community colleges with desperately needed support.”

Opponents, including the California Chamber of Commerce, say that big commercial landlords targeted by the measure could pass costs on to their tenants. That could threaten small businesses and lead to price increases at stores and restaurants, they say.

“Don’t believe anyone who tells you that an $11.5 billion property tax increase won’t cause economic harm,” Edwin Lombard, president of the California Black Chamber of Commerce, wrote in a CalMatters opinion piece, “particularly in a state facing more than 11.4% unemployment, with millions of businesses closed or a pay period away from closing.”

Should California take on debt to continue funding stem cell research? The University of California regents think so — and the university would be one of the biggest beneficiaries of Proposition 14 if it passes.

California has been running its own stem cell research agency since 2004, back when the federal government wouldn’t fund certain experiments because of ethical concerns by pro-life advocates.

The California Institute for Regenerative Medicine provides grants for stem cell research, and runs internship programs in which high school and college students get hands-on training in the field. Higher education institutions have received a majority of the grant funds.

But in 2019, the agency announced that it was running out of money.

If Prop. 14 passes, the state would float $5.5 billion dollars in bonds to fund CIRM, guaranteeing it could continue to give grants, including $1.5 billion for the study of brain and neurological diseases. A bond is a loan that taxpayers have to pay back; last year, the state used around 3% of its general fund to repay bonds.

Besides UC, the Yes on 14 coalition includes patient advocacy organizations and other research institutes, who say the state would benefit from the clinical breakthroughs, jobs and royalty payments generated by CIRM’s work.

But concerns have emerged about conflicts of interest on the board that awards the grants; even one of the board’s own members, Jeff Sheehy, called Prop. 14 a “scam.” The board has members appointed by some of the same universities and pharmaceutical companies that have received the biggest chunks of funding. In 2013, the Institute of Medicine released a report recommending that CIRM change its governance structure to appoint more independent members, and to not guarantee membership to organizations. Prop. 14 does not address those recommendations.

Ethan Edward Coston is a former fellow with the CalMatters College Journalism Network, a collaboration between CalMatters and student journalists from across California. This story and other higher education coverage are supported by the College Futures Foundation.