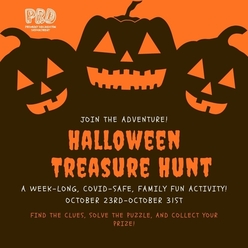 The rec department's Halloween Treasure Hunt is sold out.

In late September, Piedmont police Chief Jeremy Bowers said most Halloween activities would be a scratch this year, thanks to the novel coronavirus and Alameda County health orders restricting most gatherings and recommending against other specific actions, including handing out candy and costume parties.

Those restrictions and recommendations — as laid out in a joint health order from Alameda, Contra Costa, Santa Clara, San Mateo and Santa Cruz counties — discourage trick-or-treating and small-group parties as high-risk activities because they increase contacts with people outside of small social bubbles. (Larger gatherings, as well as trunk-or-treating, haunted houses and indoor mazes, are not allowed at all).

So with Halloween and Day of the Dead both about two weeks away, City Administrator Sara Lillevand took the time Monday to remind the Piedmont City Council and the general citizenry of those realities, and of some alternatives like decorating one’s yard in ghoulish ways, visiting a pumpkin patch (masked up, of course), have a pumpkin-carving contest and/or costume contest  (virtually).

One thing separating Piedmont from the East Bay’s other COVID-19-limited cities during this Halloween season is the “Halloween Treasure Hunt,” a weeklong event put on by the Piedmont Recreation Department.  Those who signed up (it’s full up now, by the way, with 225 participants)  will, during the week leading up to Oct. 31, search Piedmont’s parks for clues to solve a puzzle and collect their prize on Halloween.

Vice Mayor Teddy Gray King praised the rec department’s efforts during the pandemic in keeping at least some facilities, and some programs, going under challenging conditions.

“It’s only through park and rec programs my kids see any peers,” she said. “It makes us feel normal again.”

Also during a shorter-than-usual meeting Monday night, the City Council took care of two items they say should close the books on the city’s 2019-2020 budget.

In addition to a handful of end-of-the-budget-year “appropriations, adjustments and carryforwards” between various city funds, the council also voted Monday to move $500,000 from the city’s general fund to its Facilities Maintenance Fund. This fund, over the current fiscal year, is expected to be used for annual repairs and maintenance for each city-owned facility (including parks and walkways/stairs); scheduled maintenance of city buildings and other facilities; and for capital projects.

Given the substantial maintenance needs, the current projection is that the Facilities Maintenance Fund could be depleted in about four years, according to a city report.

Monday night’s move follows a similar transfer of $550,000 that was part of the 2019-20 budget. A combination of “favorable revenue trends” and lower-than-budgeted expenses resulted in net income of approximately $804,000 in the general fund, according to Piedmont Finance Director Michael Szczech.