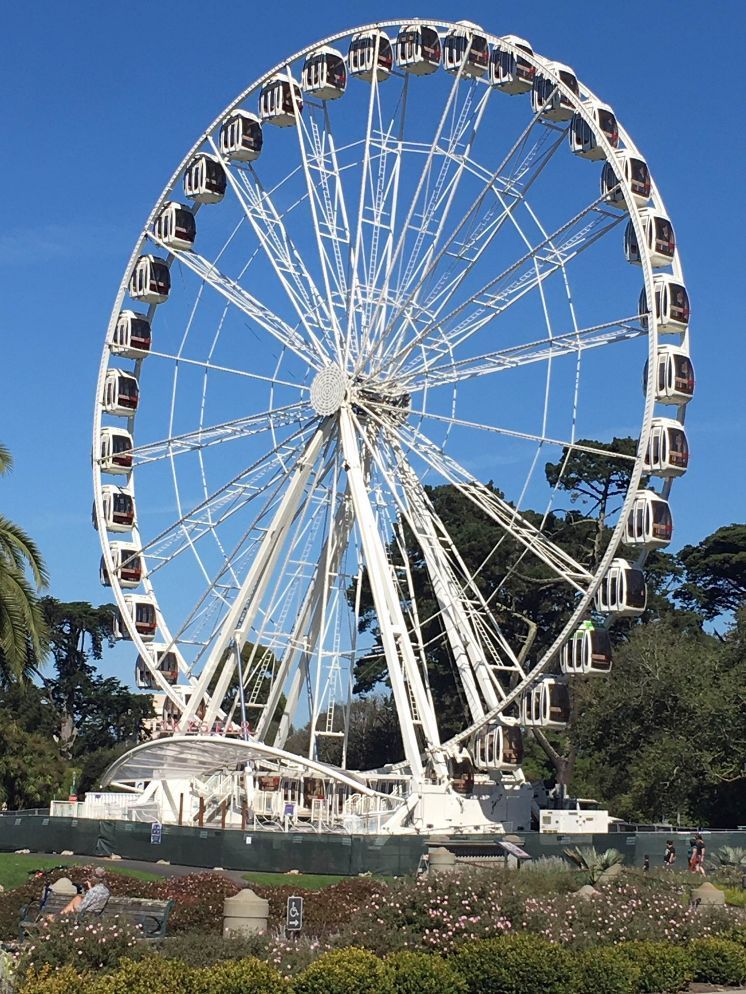 The gondolas on the Wheel go round and round, as the SkyStar ride starts carrying passengers this week in San Francisco's Golden Gate Park. (Photo courtesy of John Finck)

Big wheel keeps on turnin’: For a bird’s eye view of Golden Gate Park and far beyond, climb aboard one of the three dozen enclosed and temperature-controlled “gondolas” on the new, 150-foot-high SkyStar Observation Wheel now open for business on the park’s Music Concourse. Installed back in March in observation of the park’s 150th anniversary, but stymied until now because of the pandemic, the revolutionary ride begins operations at noon Wednesday and will carry passengers, limited to one household per car, for four complete circuits lasting 12 minutes. During its first five days in operation, SkyStar rides will cost $10 for everybody; beginning Monday, prices will be $18 for adults and $12 for seniors and youngsters 12 and under. Safety precautions in force include social distancing in lines, sanitizing the gondolas between each ride and temperature checks for staffers. Advance reservations are required, and hours of operation will be from noon to 10 p.m. Monday through Friday (colorful LED lights will set the wheel aglow at night) and 10 a.m. to 10 p.m. Saturday and Sunday. Ticket reservations can be made at www.skystarwheel.com. SkyStar is on the outdoor plaza of the Music Concourse, near the de Young Museum, the Japanese Tea Garden and the California Academy of Sciences.

There will be blood: One of the most famous — if not THE most famous — operatic meltdowns in all of the repertoire gets thrown across a huge LED drive-in screen mounted at, of all places, the Fort Mason complex in San Francisco’s Marina District on Sunday night. San Francisco Opera’s 2008 production of Gaetano Donizetti’s “Lucia di Lammermoor,” starring the incomparable French soprano Natalie Dessay, will be screened for car-bound opera lovers in up to 98 vehicles spaced 6 feet apart beginning at 6 p.m. Watch in pity and horror as Lucia, a lovely 17th-century Scottish lass betrayed by her brother and mistakenly shunned by her beloved betrothed, loses her marbles and commits a murder. The opera, based on a historical romance by Sir Walter Scott, was a smash hit when it premiered in 1835. S.F. Opera’s production also stars tenor Giuseppe Filianoti as the fiancé and baritone Gabriele Viviani as the brother. Tickets, which must be ordered in advance, are $49 per car plus a $5 handling charge. Find them at sfopera.com/FortMasonLucia or call 415-864-3330.

Live music of all stripes: A bloody famous opera isn’t the only nontraditional offering you can find at a drive-in these days. The Bayshore Drive-In in Burlingame is hosting live concerts, and you have several intriguing choices this week and weekend. At 9 p.m. Thursday, singer-songwriter-musician Stephen Lee Bruner — aka Thundercat — takes the stage with his high-energy and eclectic fusion of pop, funk and R&B. At 8 p.m. Friday, DJ Shiba San spins his take on house music. At 4 and 8 p.m. Saturday, superstar EDM trio Major Lazer performs (the 8 p.m. show is sold out), and at 4 and 8 p.m. Sunday, the popular and sassy Oregon pop/classical/jazz band Pink Martini holds forth. Ticket packages — based on the number of passengers in your car (two or four) and where you are parking — range from $99-$276, and additional individual passenger tickets are $45 each. Go to www.bayshoredrivein.com.

An of-the-moment play: Berkeley’s Aurora Theatre Company has won acclaim for the intimate and often topical feel of its productions. And even during a pandemic that has shut down live stage performances for the time being, Aurora seems to be filling that bill. Its latest offering is an old-fashioned audio play with a very contemporary storyline — three people caught in a fictitious shelter-in-place situation in a Berkeley apartment building where things get a little … interesting. “The Flats” features a collaboration between three playwrights — Lauren Gunderson, Cleavon Smith and Jonathan Spector — and centers on three characters, played by Bay Area theater actors Lauren English, Khary L. Moye and Anthony Fusco. Oh, and it will be presented in three parts. Part 1 debuts Friday, Part 2 premieres Oct. 30 and Part 3 debuts Nov. 6. Access to the play is free, but donations are encouraged. Go to auroratheatre.org.

Linda and Los Cenzontles: If you saw last year’s superlative documentary “Linda Ronstadt: The Sound of my Voice,” you may have noticed a scene where singers from San Pablo’s Los Cenzontles Cultural Arts Academy perform. Turns out, Ronstadt’s ties to Los Cenzontles go way back. A new documentary out this week explores that connection as it follows a road trip Los Cenzontles performers take to Ronstadt’s Mexican hometown to perform, with the superstar singer and her pal Jackson Browne on hand. You can stream the film, “Linda and the Mockingbirds,” at such platforms as the Shout Factory, Amazon and iTunes; $9.99-$19.99.