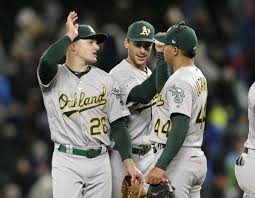 A's head for the playoffs

Major League Baseball finished its abbreviated 60-game regular season last week, and started the playoffs on September 29. After an initial coronavirus scare that forced two teams (the Marlins and Cardinals, both of which eventually made the playoffs) to miss several games, the league was able to complete the season without additional health issues. Sixteen teams made the expanded playoffs this year, eight in each league, compared with 10 total in the last few years.

The hometown Oakland A’s are the second seed in the American League. They won their wild card series against the Chicago White Sox, sweeping the final two games after losing the first. The A’s play their division rival Houston Astros in the Division Series round; the Astros swept the Minnesota Twins.

The Tampa Bay Rays are the first seed in the AL. They beat the Toronto Blue Jays in the wild card round. The Rays now face the New York Yankees, who swept the Cleveland Indians in their first-round matchup. The Yankees and Indians played an extremely exciting game 2, which New York won 10-9 and featured an extraordinary double play by Yankee third baseman Gio Urshela.

The cross-town Giants just missed the playoffs, losing out to the Milwaukee Brewers for the 8th seed in the National League. The Brewers then lost to the top-seed Los Angeles Dodgers in the wild card round.

The Dodgers play the winner of the St. Louis Cardinals-San Diego Padres series, which concludes today.

The other National League Division Series features the Atlanta Braves and the Miami Marlins. Atlanta swept the Cincinnati Reds, and upstart Miami won both games against the Chicago Cubs.