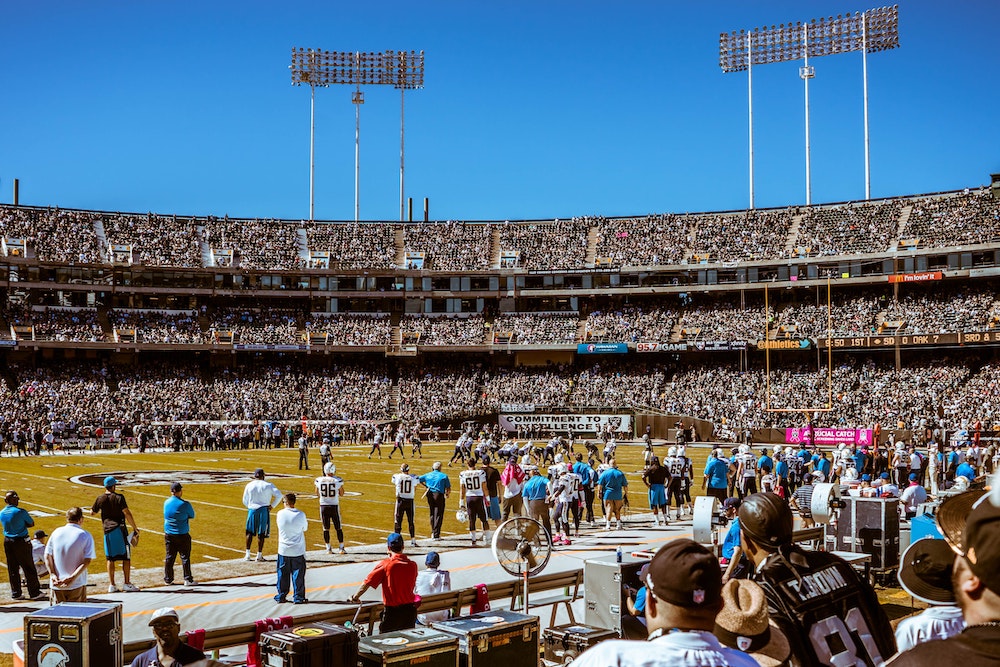 In late March 2017, a crowd of worried Raiders fans rallied with East Bay politicos inside the Coliseum’s East Side Club in a desperate, last-ditch attempt to halt Mark Davis from taking the team to Las Vegas. Amid all of those long faces and emotionally charged speeches, one man’s noticeably calm and confident voice pierced the gloom.

“I’m not feeling worried, I’m not feeling stressed,” he told the large audience, reminding Oakland fans they had done nothing to deserve losing their team for a second time.

That voice belonged to Ray Bobbitt, an Oakland business owner who commanded the tense room with a steadying soft-spoken charisma. Perhaps most important, he appeared to be the only person there with a Plan B.

This summer, more than three years after the NFL approved the Raiders’ Vegas move, Bobbitt finally revealed that Plan B.

The African American Sports & Entertainment Group (AASEG), led by Bobbitt, announced on June 19 that it had sent the NFL a proposal to bring pro football back to Oakland. Even more, the group’s leaders aim to lead an expansion franchise that would make NFL history by being its first team with majority Black owners. Three weeks after receiving Bobbitt’s proposal, the NFL replied with a letter that was noncommittal, but clearly left the door open to further talks, encouraging Bobbitt and his partners to forge ahead.

And forge ahead they have, adding investors and partners such as Robert Bobb, a well-connected former city administrator in Oakland and Washington, D.C., where he helped build the Washington Nationals’ ballpark. Adding Bobb is a big deal. It brings credibility to the group’s proposal, making it instantly less quixotic and more, dare I say, realistic.

“If anyone knows the local history of the Oakland Coliseum and the history of the Raiders leaving and returning, it’s Robert Bobb,” Gallo said. “He also knows all the national players and the ins and outs of ballpark construction.”

“I’m excited by this new venture,” he said. “It’s a really positive direction for a city like Oakland, where we need to create that special setting to attract businesses and jobs.”

Bobbitt purposely made his first announcement on Juneteenth (which celebrates the 19th century emancipation of Black Americans who’d been enslaved), right as the U.S. was enveloped by demonstrations protesting the videotaped police killing of George Floyd in Minnesota.

It’s long overdue for the NFL to have a Black-owned franchise, and Oakland’s history of rebellion and African American activism — coupled with decades of loyal sports fandom — make it the perfect city to host it.

“It’s an action item, with respect to the current social justice movement in this country,” Bobbitt said of his group’s NFL proposal. “Oakland is one of the places where African American ownership could succeed because of the way people think and live here; because of the forward-thinking nature and multicultural diversity in Oakland and the Bay Area. People of all races and cultures would embrace it.”

The NFL’s July 8 letter said the league “would be open” to the ownership group’s proposal for an Oakland team. The note, written by league executive Jeff Miller, referred to the Rooney Rule, an NFL policy that requires franchises to interview candidates from minority groups for head coaching and senior football operation jobs.

“Recently, the requirements of the Rooney Rule were enhanced and broadened to encompass interviews for additional senior positions at the club and league levels,” Miller wrote. “In that regard, we would be open to your offer to provide us information about potentially qualified owner candidates that you identify.”

Bobbitt reminds me of the old John Wooden credo: Be quick but don’t hurry.

He remains unwilling to cut corners and instead has stayed true to his vision of crafting a business plan that will benefit his hometown. Specifically, he aims to economically empower the East Oakland district in which he was raised. He hopes to build a privately financed stadium for the new franchise. When it’s suggested to him that it might be easier to buy an existing franchise and move it to Oakland, he shakes his head. The group is applying for an Oakland expansion team, Bobbitt said, in part because he wants to respect other NFL cities and their fans.

A pro football team with the NFL’s first Black ownership group could find national or even international support from fans who understand that Black entrepreneurs deserve to participate in pro football’s revenue streams, especially given that African American athletes have long been the bulwark of the industry’s labor. Even though nearly three-quarters of all NFL players are Black, they hold very few front office jobs or upper management positions.

And among the NFL’s 32 franchises, none of them are led by Black owners.

Bobbitt and his partners want to change that and be the first, and they say now is the perfect time.

“This could be a Jackie Robinson moment,” Bobbitt said. “With a first Black owner making NFL history, this team would have global appeal and we’d sell so much merchandise we wouldn’t be able to keep it on the rack. The enthusiasm would be overwhelming.”

Even at this early stage, however, big questions loom.

Would the NFL give Oakland a chance after letting the Raiders recently ditch The Town? And will the same owners who’ve blackballed former 49ers Colin Kaepernick and Eric Reid for protesting police brutality during the national anthem take sincere action to back up their recent saccharine platitudes after the Floyd demonstrations?

The NFL will have its next best chance to answer those questions in the coming weeks and months, when the Oakland ownership group presents more financial details to league officials.

Well, he wasn’t worried or stressed back in early 2017, when fans like me were freaking out about the impending Vegas move, suffering from “relocation PTSD” as the Raiders backstabbed Oakland a second time.

And Bobbitt says he’s not worried or stressed now. Instead, he is quietly, confidently working toward his East Oakland dream, taking a methodical and persistent path toward making NFL history.

He believes the time is right for the league to have a majority African American team ownership. I agree with him. As does his expanding group of credible business partners.