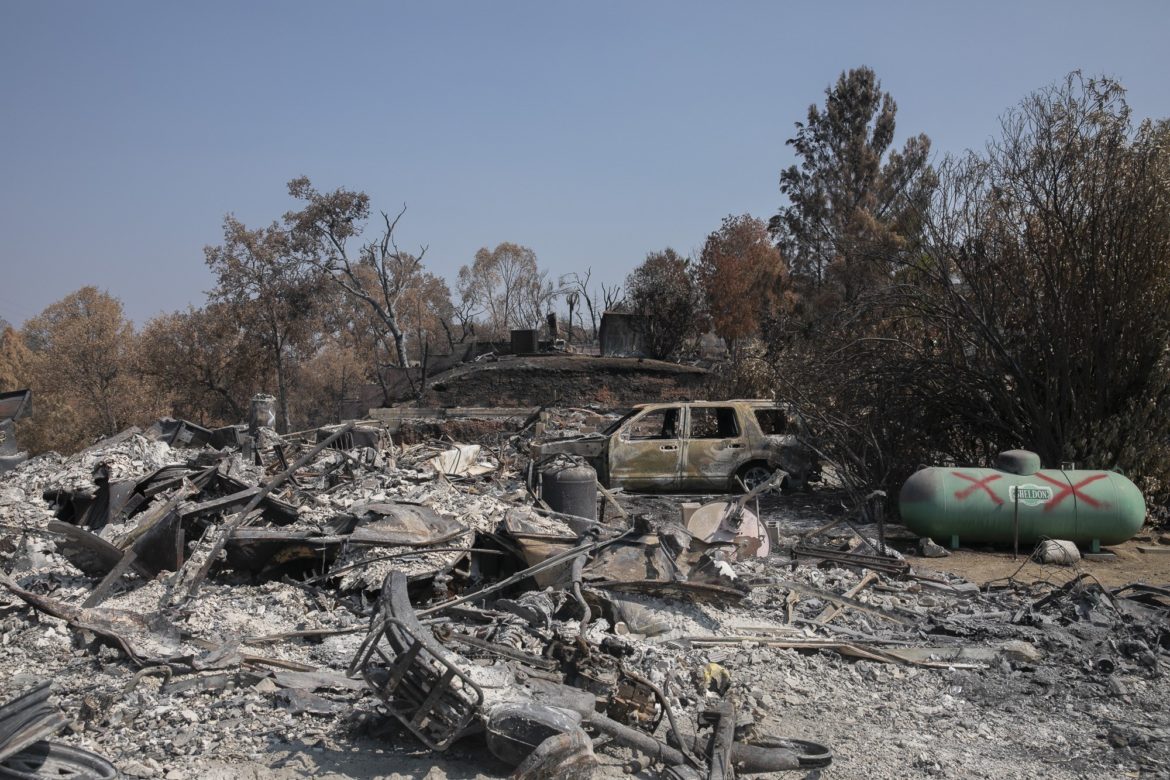 The remains of a burned home in Berryessa Highlands on Sept. 21, 2020. Photo by Anne Wernikoff for CalMatters

Also unfathomable: the size of the monstrous August Complex fire, which at 970,563 acres and growing dwarfs every other fire in recorded California history, none of which have passed the 500,000-acre mark. The massive conflagration gained steam Saturday amid gusty winds, forcing additional evacuations even as officials fear it could merge with the deadly Zogg Fire.

Meanwhile, firefighters over the weekend made progress on the Glass Fire, which has damaged at least 17 wineries and destroyed nearly 300 homes, establishing it as the most destructive blaze to confront California’s famed Wine Country. More than 215 other wineries and nearly 100,000 people remain under mandatory evacuation or evacuation warnings.

Northern California is expected to see cooler weather, higher humidity and rain later in the week — which could help soothe fire-ravaged areas, tamp down flames and bring relief to residents choked by unhealthy air quality.

But rain brings problems, too — namely, the ability to poison California’s water supply with dangerous chemicals from burned buildings, trees and land, CalMatters’ Rachel Becker reports. About two-thirds of the state’s water supply flows from forests susceptible to burning.

A dearth of bills. A bevy of executive orders. In four charts, how the pandemic reshaped California politics in 2020.

Today, California’s beleaguered unemployment department is slated to resume accepting new claims after a two-week pause intended to give it time to implement a new automatic identity-verification tool and reduce a backlog of nearly 1.6 million claims. I asked the Employment Development Department on Sunday whether it was ready to launch the tool today, but didn’t hear back. EDD appears to have cleared 146,513 claims from Sept. 24-30, the last week for which data is available. Whether the new tool can handle what is sure to be a sizable influx of pent-up claims from the past two weeks remains to be seen. We’ll likely hear more at an Assembly hearing on Wednesday.

The California state auditor was also slated to begin an emergency audit of the department by the end of September. I asked the state auditor’s office on Sunday whether the audit had begun, but didn’t hear back. I’ll let you know when I do.

Don’t forget to check your mailbox this week, because today, counties are required to begin sending out mail-in ballots for the November election. It’s the first time in California history that a mail-in ballot will be sent to every active registered voter — and this year there are more than 21 million, a record high. If you have questions about voting logistics, check out CalMatters’ voter guide or submit your question to be answered.

Of the 21.2 million active registered voters, 46.4% are Democratic, 24.2% Republican and 23.7% No Party Preference, according to a breakdown released Thursday by Secretary of State Alex Padilla. This represents a comeback of sorts for the GOP, which fell behind No-Party-Preference voters in 2018 — although Republicans now make up a smaller share of the California electorate than they did in 2016, when they represented 26.8% of registered voters.

3. Gun violence on the uprise

Gun violence and homicide rates are rising in California cities, a concerning trend that police chiefs and advocates partially attribute to the pandemic, which has driven up gun sales along with anxiety and depression rates as the economy spirals downward. Oakland has already seen more homicides this year than it did in each of the previous three years, and assaults with a firearm shot up 44% from the same time last year. In San Francisco, homicides jumped 30% and gunfire incidents 32%. In Los Angeles, homicides increased by nearly 14%. And in Sacramento, this past weekend alone saw several incidents, including two drive-by shootings — one killed a 9-year-old girl — a homicide, and a shooting at a halal market in which the gunman shot three others before fatally shooting himself.

Still, experts say it’s too early to ascribe a single reason to the uptick, and warn against reading too much into short-term trends — especially given the fact that California’s crime rate has dropped steadily in recent years, and fell to an all-time low in 2019.

Newsom may have recently vetoed a bill that would have required California high school students to take an ethnic studies class in order to graduate, but the fight over the controversial curriculum is far from over. In a pointed critique of the governor’s decision, state Superintendent of Public Instruction Tony Thurmond unveiled a new series of ethnic-studies broadcasts Friday.

In his veto message, Newsom said he supports ethnic studies — he recently signed a bill to make it a CSU graduation requirement — but believes the high-school curriculum “still needs revision.” The state in August released an updated draft, nearly a year after its initial version was excoriated for being too politically correct, anti-Semitic and full of academic jargon. But the second draft hasn’t proved any less contentious, with Jewish and Sikh-American groups, among others, calling for more inclusion and representation. The state Board of Education will vote on the second draft in March 2021. Meanwhile, Assemblymember Jose Medina, a Riverside Democrat, plans to reintroduce the ethnic studies bill in December.