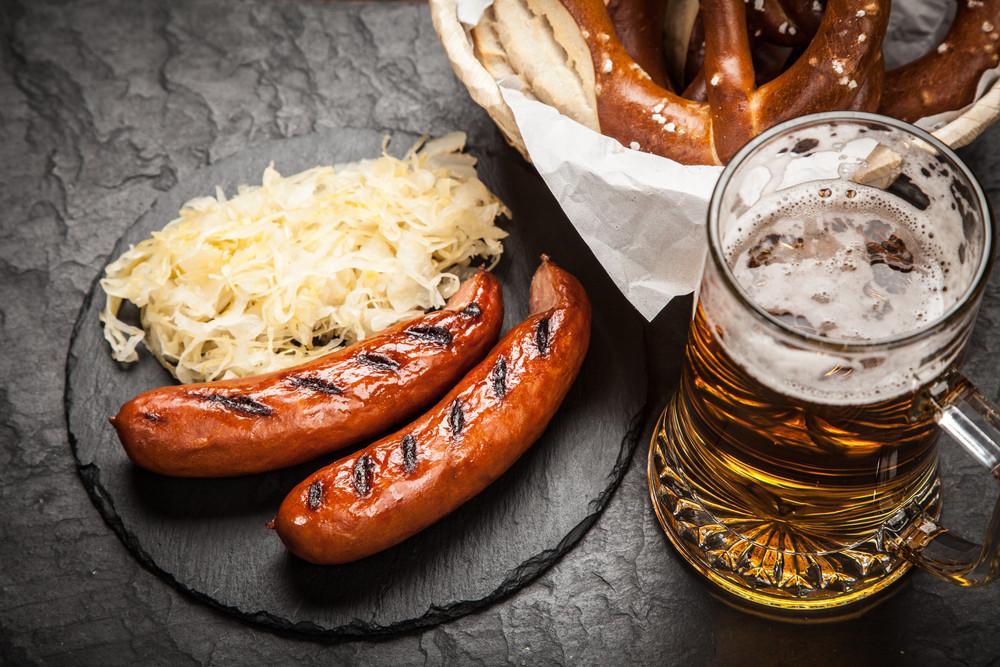 October days are at an end but the wurst and beers are yet to come. Dine al fresco or DIY Oktoberfest at home with take-out from one of the East Bay’s fine German restaurants. Among the possibilities in close proximity to Piedmont are the well-established Brotzeit Lokal in Brooklyn Basin on the Oakland waterfront and Hofküche, a new Bavarian-style biergarten on 25th St. between Broadway and Telegraph in Uptown Oakland.*

Co-Owner Krista Granieri at Brotzeit spoke to the Exedra and reported that sausages and beer are selling quickly during the final days of the annual German festival. With origins in 1810 and intended to honor the marriage of the crown prince of Bavaria, (who later became King Louis I) to Princess Therese von Sachsen-Hildburghausen, the festival in America is a celebration of German culture and cuisine.

“We just got word we are listed by Michelin as one of 25 California restaurants in their inspector “discoveries” list,” says Granieri. She and co-owner Tony Granieri are thrilled to be included, especially as the Michelin Guide this year chose not to publish star awards in the California edition due to the pandemic and California wildfires.

During the past few months, as guidelines seem to change weekly, Granieri says it has been “tricky,” but Brotzeit’s location has been a boon. “We’re on the waterfront, so you can dine in groups of up to six people outdoors and you get that wonderful view.”

Under the latest guidelines they are able to add indoor dining at 25 percent capacity, and the restaurant has been busy. “It’s going well because we have all the safety protocols in place and people can see that,” she says. “It’s encouraging.”

The most popular items for takeout are the Wurst Family Platter and the Schlot Platter that feed small groups of people in pods or families at home. From the beverage menu, the malt aroma and bready, toasty flavor of Hofbräu Maibock and the kick of German-style lager Hofbräu Munchen Kellerbier are “super popular.” Although she says DoorDash has been decent to work with for deliveries, she recommends picking up orders in person whenever possible. “We can’t always know how long delivery will take so we don’t have complete control of the timing. German food is best eaten within 30 minutes and even warmed up at home if necessary.”

For the truest, most complete Oktoberfest experience, Granieri advocates a visit to the restaurant. “You can drink beer out of a traditional stein—or a two-liter serving out of a boot-shaped stein. I don’t know how, but the boots are super fun and people manage to do it,” she says. “We always recommend they have a designated driver with them.”

With 48 hours remaining in the month of October, turn the corner into November and support local business owners with a stein in hand and a brat—wurst, that is—at home or in a favorite beer garden.